The best of White Chocolate. 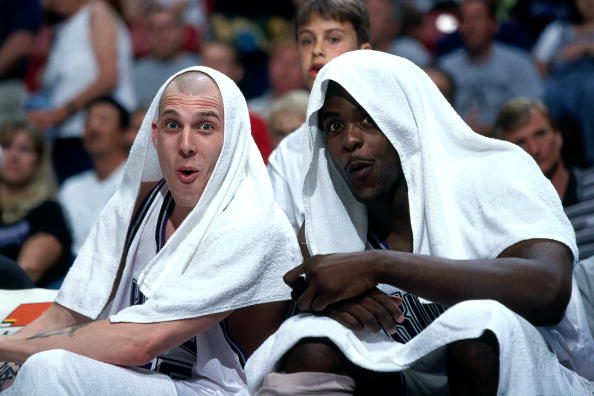 Jason Williams wasn’t a dominant player or stat-stuffer in the realm of Magic Johnson or Jason Kidd. Even in his prime he’d only go for 20 once or twice a month, and he wasn’t gonna hit three after three in your face. But no point guard ever brought more style and hustle to the game than the man affectionately known as White Chocolate.

Williams’ handles allowed him to do just about anything with the ball, and his teammates always absorbed his unselfishness. He was drafted by the perfect team, debuting in Sacramento alongside C-Webb, Vlade and Peja as part of a group famous for its ball movement.

In 2001 he was dealt to Memphis, where he teamed up with then-rookie Pau Gasol (now perhaps the best passing big in the L), high-flyer Strom Swift and the always-hustling Shane Battier.

Yup, prime Williams found himself in the right spots to flex his game, which, for a modern fan, carried all the excitement of a locked-in Rajon Rondo. He was a mediocre three-point shooter, but he had some strange intangible that made him a scary candidate to nail a half-court buzzer-beater or find a way to turn momentum by doing some, um, crazy shit. Sound familiar? It was Williams’ unorthodoxy, if you will, that scared you the most. Only one dude on the floor knew what Jason Williams was gonna do next, and it certainly wasn’t the poor guy D-ing him up.