Video: The Rise of Jeremy Lin 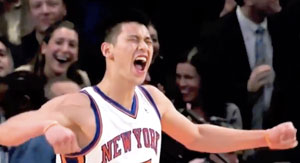 Watch the magic unravel here in yet another epic Maxamillion joint.