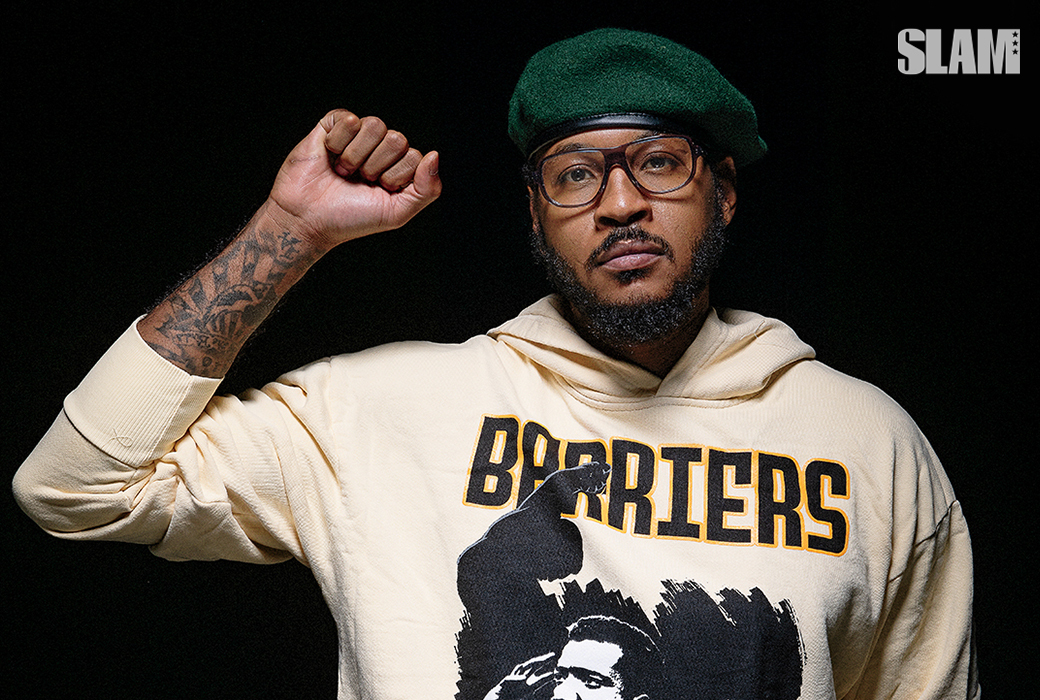 CLICK HERE FOR CARMELO’S LETTER TO THE NEXT GENERATION

Carmelo Anthony and I caught up on Zoom with a lot more than six feet of social distance between us. I was in my Bed-Stuy apartment and he was in his Portland home, where I could hear echoes of his son playing in the background.

Somewhere on his journey from Brooklyn to West Baltimore to Denver to the Big Apple, Melo learned how to wield the power he earned from the game he loves—even when the game stopped loving him back.

SLAM: I went to Morehouse College, an HBCU, and am working on a movie with Will Packer about a basketball phenom who also goes to an HBCU. Do you think top prospects should go to Black colleges? Would you tell Carmelo Anthony, the high school superstar from Oak Hill, to go to an HBCU?

SLAM: As someone who had the opportunity to go straight from high school to the League, why did you choose to go to college?

SLAM: Did any of the guys you grew up with make it to the League?

CA: No one ended up in the League. In West Baltimore, we were hardcore, we were rugged. Not to say East Baltimore wasn’t, but [in West Baltimore] we were just angry. We were ready for anything that happened. We were project kids and project living is totally different from hood living. Unless you lived in the projects, you wouldn’t understand. It was super tough, man.

I was taking it one day at a time. It was like, Oh shit, what’s gonna happen tomorrow? Whatever happens, it happens. And that’s my mentality now after all these years, because I was in that mindset and in that environment. I’ve seen people supposedly make it out of my neighborhood, but they end up right back. There really was no hope. So I wondered if I should even take basketball seriously.

SLAM: We’re in a crazy time and athletes are at the forefront representing Black people in many important conversations. Black athletes have taken on that responsibility for years, but now the platform is even bigger. What are you seeing shift in the ways that Black athletes are speaking up right now?

CA: We’ve realized our voices are strong and will be heard. Financially, we’re in better situations than the athletes that came before us. We can take chances because we’re more financially stable. We can go out there and say, No, we aren’t going to stand for this. Athletes in the ’60s weren’t paid like us today. It was hard for them to come together. Many athletes didn’t get on board with [civil rights activism] because their money was being controlled by someone else. They were controlled by a bigger power, the white man. They couldn’t go against that because their family would say, Just be quiet. Keep moving. Don’t say nothing because you’ll jeopardize us as a family.

SLAM: I wonder when you guys will create a league of your own, competitive to the NBA. What do you think about that concept?

CA: Conceptually, it’s a very good idea. But just like anything else [that’s] successful, it takes time to build. Maybe it could happen in 10 years. But if that’s what we want to do, we have to start laying that foundation now. We have the backing financially if we really want to create our own league. But you need people on board. You need everybody to understand that this is a long play. You gotta be strategic because you’ll be going up against a bigger conglomerate in the NBA. We can go raise money, that’s not the issue. But everything else will take time.

SLAM: You became a basketball star as a junior in high school. How did your mind process fame and expectations at such a young age?

SLAM: Did you feel the pressure in the National Championship game you won at Syracuse? Or when you played for the Olympic Gold medal?

CA: No, I didn’t. And I think people misinterpret that, as if I don’t care about those moments. It’s not that I didn’t care. I care more than many people. What I’ve done shows that. But when you grow up the way I did, you’re programmed to believe that nothing else around you matters. It’s all about you in that moment and whatever happens in that moment. So it took me a long time to grasp the fact that I won a National Championship. I never watched the National Championship game until a couple years ago. Even with the Olympics, I never looked at them as winning the biggest shit ever. That’s why I never felt pressure in those situations.

SLAM: Do you have any favorite teammates from your career?

CA: JR Smith. We were brothers. I would say Allen Iverson for the short period that we played together. I’ve learned so much from his mentality. I learned how to approach the game. The team in Denver, we were together so much that they started calling us the “Denver Thuggets.” I’ve created bonds with all of these guys, and I think when the narratives come out about me being a bad teammate, you never hear my old teammates say any of that.

SLAM: Only reporters say that. None of the people who actually know you have a bad word to say about you.

CA: I pride myself on that. That stems from treating everybody the same way. I treat the person who is cleaning my house the same way I treat President Obama. It’s respect.

SLAM: Do you feel like the intelligence of NBA players is underrated?

CA: Absolutely. Hence why you keep hearing: Just shut up and dribble. There was a time when we weren’t allowed to give our opinions on religion or politics or whatever. That’s changing now. We took back that power, and that’s because guys are becoming more knowledgeable about the situation that we are in.

SLAM: Who was more fun to go out with, JR Smith or Allen Iverson?

CA: See, I had both of them together on the Nuggets [laughs]. We were like The Beatles when we hit the road. You had myself, young JR Smith, AI, Kenyon Martin, Marcus Camby. We were rolling when we came into town. We had a show. But we also were known to party. I’m talking ’bout ’05, ’06, ’07. We’re gonna party the night before, we’re gonna hang out, we’re gonna have a good time, but also you know you gotta come to play against us. And that was something that I learned from playing on those teams. It was like, Dang, how can AI party like this but then you’re coming out here and giving 40?

And then I went to New York where we always had each other’s backs. We corrected each other. We held each other accountable. If there was something going on, we sat in that locker room and called people out. What’s the problem? What’s going on? Why you mad? Let’s bring this to the forefront, put it out there on the table. Fuck it. We’re going to play basketball now. And there’s no accountability like that nowadays.

CA: Guys are a little more sensitive now. The League is getting younger to where you can’t really have those conversations. Now, what you’re dealing with is, if you’re mad at me and I’m mad at you, everybody else knows that. Everybody else has their opinions, social media, comments, Twitter, this, that, everybody else gets involved. There isn’t the same privacy. And we had social media back then, but we wouldn’t allow that social media to seep into our locker room.

SLAM: What did you feel in your body the night you scored a Madison Square Garden-record 62 points?

CA: Before the game, I’m sitting in the locker room putting my headphones on. Our team therapist used to talk to us and give us motivational speeches to listen to and everybody had their own person that they listened to. My person was Muhammad Ali. So he gave me a Muhammad Ali motivational speech. Ali kept saying, “Imma show you how great I am. I’ma show you how great I am.” I watched this shit probably 20 times before the game. I leaned over to [Iman] Shumpert and I was like, Yo, we’re gonna get it. Today’s gonna be a good day. I’m locked in.

On the court it was just like, I’ma show you how great I am. I was just super zoned out and I felt it all over. It was just an overall vibration that I had.

SLAM: I’ve been living here in New York for about a decade. There’s a special connection between you and this city. Why?

I always say, people can sense through bullshit. People know who’s authentic and who’s not. My authenticity got me to a point with New York where I’m a major part of that city. I wanted to go to New York for that reason. I wanted to help put the city on my back. I wanted to take on that challenge. And I wanted to show everybody that no matter what happens, no matter what the narrative is, I’m gonna always come to play. I’m gonna smile through the bullshit, and I’m gonna bring people along with me. And the city felt that.

SLAM: Last year, many basketball fans were scared we were never going to see you play again. And then you came back to one of the weirdest NBA seasons ever. Are you glad you came back?

CA: Yes, I’m glad I came back. Is it a weird season? Hell yeah. It’s weird that I lost my brother Kobe. And that was the beginning of destruction for everything. So this season will be a season that I will never forget.

I wanted to come back badly, but it had to be right. I got to a point where I was willing to walk away from the League. I stand on the truth. I stand on being real. I stand on being honest with people. I’d rather you come to me and be like, We’re cutting our ties with you. It was a respect thing that I was looking for. I felt like I put so much work into this game. I put 15, 16 years into this game.

There was one thing I kept saying to myself: The game doesn’t love me the way that I love the game anymore.

We all have to face that one day. I feel like the game doesn’t love me the way that I love the game. I needed to get away for a while. And then if the game came back or I came back, I thought things would be different. And as you can see, that’s what happened. I ended up in a totally different situation with an opportunity in Portland. They gave me an opportunity to come back and they also gave me a platform to go out there and continue to showcase what I can do at a high level.