Alonzo Mourning Is Critical of Jackson and SVG 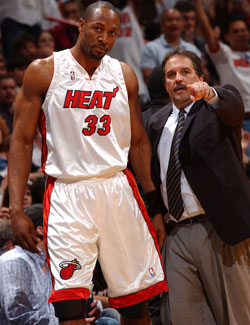 Different coaches have different styles. Stan Van Gundy and Phil Jackson couldn’t be any different in their command, but one thing’s for certain: Both men understand how to coach!

Alonzo Mourning, apparently, doesn’t think so, taking shots at both coaches recently. Read what he had to say about Jackson:

“To tell you the truth, Phil doesn’t have to do anything but call time outs,” said Mourning, the former NBA star who helped lead the Miami Heat to the 2006 championship and twice was the league’s defensive player of the year.

“Kobe is the facilitator. He is the one driving the mission of this particular team right now,” Mourning said. “The communication level he has with his teammates out there, you can just see it.”

“I think Phil is just showing up, to tell you the truth, and Kobe is doing all the work to make this team successful.”

Sure, it was comical to watch Kobe doin’ work with Pau Gasol on the clipboard toward the end of Game 3, but Jackson only calls the timeouts? Sounds like someone’s salty over all those years Phil and the Bulls owned him in the Playoffs.

Mourning, a proclaimed Magic supporter, didn’t stop at the Lakers sideline. He took a slight shot at the other, questioning Van Gundy’s defensive tactics:

“When I see the way Orlando is playing that pick and roll, I mean it’s just ridiculous,” said Mourning.

“It sort of puzzles me with Stan because he was under the tutelage of Pat Riley, who is obviously a huge defensive advocate, that he wouldn’t take a more aggressive approach, especially with the pick-and-roll play. I didn’t understand his approach.”

Again, sounds more like leftover salt from Mourning’s days with the Heat in 2005 than legit criticism.

So what are we to think? Is Stan a Pat Riley lackey or (in Riley’s words) “the most important acquisition Orlando ever made”? Is Phil the Zen Master or just resting on his laurels?