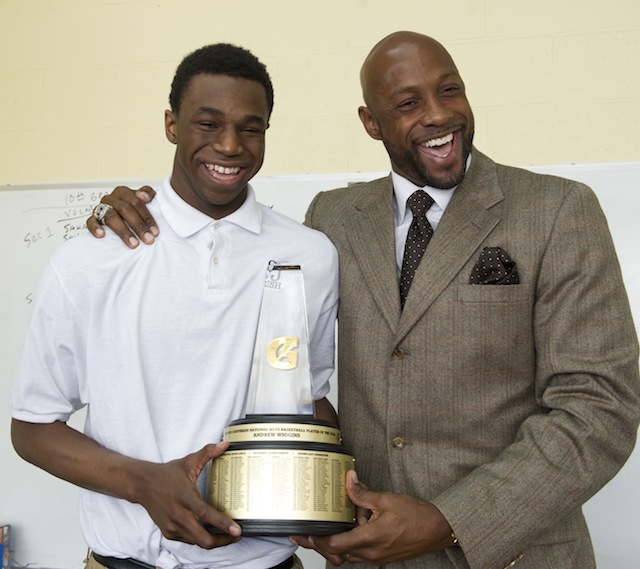 “I thought it was just a regular school day.”

About an hour after being named the 2012-13 Gatorade National Boys Basketball Player of the Year, SLAM 167 cover boy Andrew Wiggins was on the other end of the line, re-living the moment his history class became a press conference.

“I went to my first two classes. I was on my way to my third period class, history, and saw all these cameras and stuff. I just thought it was a local speaker coming to talk to the class,” said Wiggins. “Then Alonzo Mourning walked in. I was shocked.” Not to mention his third-period classmates—”They were starstruck,” he added with a laugh.

Zo and Gatorade surprised Wiggins at his high school, Huntington (WV) St. Joseph’s Prep, honoring the undecided senior with the POY award, recognizing outstanding athletic excellence, high standards of academic achievement and exemplary character demonstrated on and off the field.

After averaging 23.4 ppg, 11.2 rpg, 2.6 bpg and 2.5 apg and leading his team to a 30-3 record and Top-10 ranking nationally, the 6-8 Wiggins beat out a strong field of nominees, including Aaron Gordon, Jahlil Okafor, the Harrison twins and Jabari Parker, who won the award last season, to take home the hardware.

Wiggins joins Mourning, who himself won Gatorade POY honors in 1988, along with a list that includes Chris Webber, Stephon Marbury, Kobe Bryant, LeBron James and Dwight Howard as winners of Gatorade’s POY.

“This award has grown to such prestige. The alumni is very rich and there’s alot of responsbility that comes with it. You receive this award and people expect great things from you down the road,” Mourning said. “This raises the ante a little.”

Even with that in mind, Mourning said he hopes Wiggins will realize basketball is temporary. “I said, ‘Don’t wait until the ball stops bouncing to prepare yourself for life after basketball. Start right now.'”

Wiggins described the moment Mourning handed him the trophy as one “I’ll never forget.”

Before heading back to his normal scheduled schoolday, we made sure to ask Wiggins about reaction to his SLAM cover. “People from Canada have shown me a lot of love, me being from Canada and being on the cover of SLAM Magazine,” he said.

And yes, we asked Wiggins about his college choice, too. He’s narrowed his college choices to Kentucky, North Carolina, Kansas, Florida State, but as of today, he hasn’t set a decision date (“No clue”). Right now, Andrew just has to get back to class.