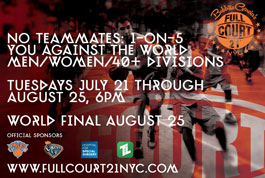 For a third consecutive year NYC will be the host of Bobbito Garcia’s Full Court 21 World Championship. The NYC qualifiers tips off tomorrow, Tuesday July 21, and will run through August 25.

The innovative tournament concept has adopted the traditional ’21′ playground game, where all players are on their own and must reach 21 points in order to win, but instead it’s played by running full-court as opposed to the common half court setting.

The weekly NYC qualifiers will take place every Tuesday at 6pm at Booker T Washington Playground (108th Street between Columbus and Amsterdam Avenue). The games will be live streamed on the app Trekker Live: trekkerlive.com/fc21nyc/.

The World Final will take place on August 25 at 6pm and will include the winners from the qualifiers in Tokyo, Hong Kong, New Zealand, London, Mali, Toronto, Vancouver, Los Angeles, Chicago, Miami and Philadelphia.

SLAM is proud to once again be the official media partner and will be providing you weekly photos and updates of all the action.

Check out the video above to relive all of last year’s action.

For those looking to participate in this year’s showcase, visit fullcourt21nyc.com for more info.