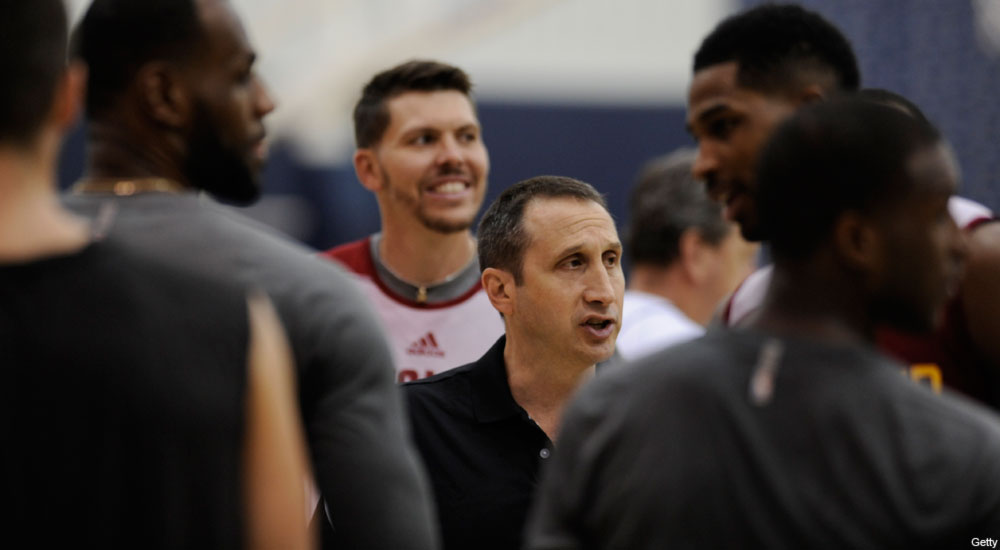 Mike Miller described David Blatt’s offense as “borderline genius” during the first full week of Cavaliers training camp. After starring for Billy Donovan at the University of Florida, Miller is now entering his 15th season in the NBA. He has competed in three NBA Finals and 85 post-season games throughout his career. He will continue to play a critical role this season for his sixth NBA team.

As a respected and accomplished NBA veteran, Miller describes his new coach’s implementation of the Princeton offense as borderline genius.

But what exactly is it that provokes a long-time NBA professional to describe Blatt’s offensive philosophy in such reverence, so quickly? This was the topic that dominated my Cavaliers’ consciousness this week, so I reached out to three of Miller’s teammates for further details. I asked each player to answer the following two questions:

1. While using only one or two words, how would you describe David Blatt’s offense?

2. Can you explain what you mean by that?

I spoke with Brendan Haywood, Shawn Marion and the rookie Joe Harris. Their descriptions of Blatt’s offense are below.

At first glance, terms like “detail oriented” and “free-flowing” might seem to contradict each other. But they are also two important principles of the Princeton offense. My impression from our conversations is that once you learn and thoroughly understand the details of Blatt’s offense, the collective movement becomes free-flowing—and potentially even “Spurs-esque.”

Haywood, Marion and Harris went on to provide additional insight. Harris is a second-round pick from Virginia entering his rookie campaign with the Cavaliers. Haywood and Marion have combined to play 27 years in the NBA prior to this season.

Haywood: “I like his offense a lot. There’s great ball movement, which is very key in the game of basketball. There isn’t as much of one-on-one. There’s a lot of the ball being kicked from one side of the court to another, which is important. But I said ‘Spurs-esque’ because it’s really all about ball movement—like how the Spurs create those mismatches with defenses by moving the ball so precisely. It doesn’t let the defense lock in on one guy. That’s a lot of what he wants, as far as back-screens, dribble-hand-offs, coming off screen and rolls, kicking and advancing the ball. It’s all about ball movement, that’s key to being a successful team.”

Marion: “It’s a good offense. It’s really good. We’re picking it up slowly but surely. Guys are moving and comfortable in it so far. It’s an offense where we’re looking to attack early if it’s there. But it’s really free-flowing, like I said. The ball really moves. By moving the ball like that, we should be able to keep some offensive pressure up on teams. Spacing is really important too. Both forward positions are interchangeable and it’s important for guys to get to their spots. Right now we’re trying to just build the continuity with it and make sure everyone is together in understanding what we need to do.”

Harris: “I played football growing up, but I never had that football-type playbook for basketball before. We have one here, and it really explains everything. His offense is really detail-oriented, each and every detail is really important. You have to read what’s happening on the floor, and understand exactly where you need to be. The difference for a wing player being at the top of the key, or in the corner in some cases, could be the difference in executing the play properly or not. I really enjoy the offense overall. It’s great for guys like myself and James and Mike Miller because it gives you spacing to knock down shots. Then that opens things up for our playmakers, LeBron, Kyrie, Dion, those guys can really attack the basket and create off the bounce with that spacing.”

LeBron James made his first appearance at Quicken Loans Arena since returning to Cleveland on Wednesday night for the Cavaliers Wine and Gold scrimmage. He was entertaining a huge collection of media members after the game as I talked with Harris on the opposite side of the locker room. After LeBron’s media session ended, he walked past Harris and I who were standing by the rookie’s locker.

“OK Joe Harris, I see you!” LeBron said loudly, on his way out the door.

The entire locker room immediately turned their attention toward Harris. He was talking with me about Blatt’s offense as I stood there holding a recorder. Every media member in the room seemed to then converge on the rookie.

A television news reporter then asked, as the mob approached, “Hey Joe, how does it feel to get a shout-out from LeBron James in the locker room?”

As I dipped away from the onslaught of reporters, microphones and cameras, I heard Harris offer the following response.

David Blatt: The ball has energy

Blatt began to describe the offensive philosophies he’s used to build his version of the Princeton offense during his introductory press conference this summer. He said he was taught by his high school coach that the basketball has energy, and all five guys on the team must touch the ball to feel connected with that energy.

This is how he believes a basketball team can become collectively engaged at both ends of the floor.

He’s since added that he wants to give his players a chance to read and react offensively by making quality cuts and passes at the right time in his system. Thus far, his new team has embraced that message. We will get our first glimpse of what this offense might look like over the weekend. Blatt’s former team, Maccabi Tel-Aviv, arrives in Cleveland to kick-off the Cavs pre-season schedule on Sunday.