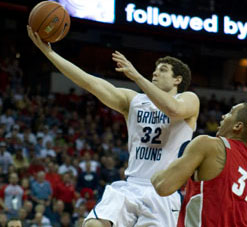 Before we go any further, let’s just get this fact out there: Jimmer Fredette had as many points at halftime (33) in his game as Wisconsin did in its entire game against Penn State on Saturday. Fredette eventually finished with a career-high 52 points as BYU ousted New Mexico from the Mountain West Conference tournament with an 87-76 victory.

Facing the team that handed the Cougars two of its three losses this season, Fredette was BYU’s entire offense, making 22-37 shots. His 52 points were the most by a player in any conference tournament in the last 15 seasons. He also passed Danny Ainge on Saturday to become BYU’s all-time leading scorer.

After scoring BYU’s first ten points, Fredette was the target of several double-teams, but he continued to be able to get off shots. Even with the extra pressure, he was able to take care of the ball too, dishing out four assists and committing just two turnovers.

Fredette’s performance in the MWC tournament semifinal victory was the greatest moment so far in one of the best individual seasons in college basketball this season.

From The Salt Lake Tribune:

“You can kind of see the score, the [player] points, because it is right there next to the scoreboard,” Fredette said. “They put it up there for you. I don’t know if it is correct or not. You can kind of tell where you’re at. But I wasn’t a hundred percent sure at all times, you know what I mean? But I did see some of the times when I looked up there and just saw the score. I knew I was having a good game. I saw it sometimes.”

The win for BYU sets up a MWC tournament final with San Diego State. The Cougars took the first two meetings, but those were both before Brandon Davies was suspended. To complete the sweep and perhaps go far in the NCAA tournament, BYU might need many more nights like this from Fredette.