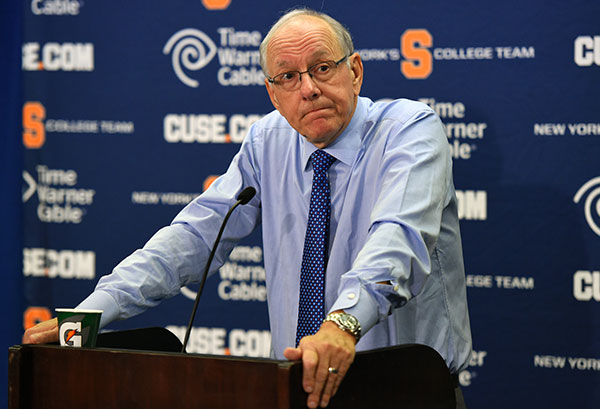 Syracuse University head coach Jim Boeheim has never been afraid to speak his mind during press conferences. In his latest presser, the legendary coach went after so-called NBA draft experts and player agents.

Boeheim, who led the Orange to the 2016 Final Four, was asked about rumors that freshman guard Malachi Richardson had signed with an agent and will enter the 2016 NBA Draft. The one-time National Champion laid into media members who create mock drafts and pointed to where former players of his were projected to be taken, and where they were actually selected.

“How do you move up (higher in the draft) when you don’t even work out? That’s just agents talking and then the scouting guys making something up so that they have a job, to justify their job,” Boeheim said before an SU alumni event at Monroe Golf Club in Pittsford, calling the notion of Richardson’s stock rising “media nonsense.”

“I hope Malachi gets in a good draft position that will be good for him. It’s good for us. He had a great career; he had a great one year for us. He helped us to the Final Four,” Boeheim said before revisiting his earlier rant about no one having an idea where Richardson will be drafted.

“Trust me, nobody has a clue right now. He could move up or he could move down, but there’s absolutely no justification to say he could be picked 15th.”