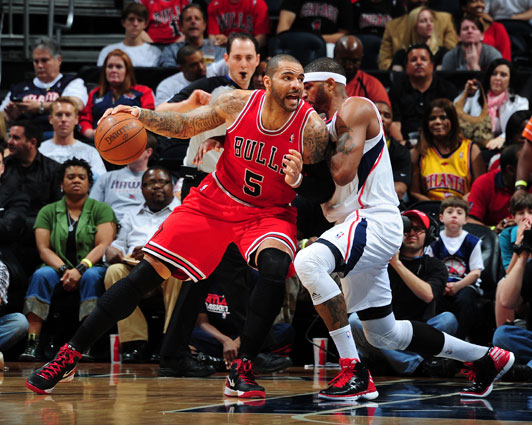 The Chicago Bulls waived veteran forward Carlos Boozer on Tuesday via the amnesty provision, and he was quickly snatched up by the Los Angeles Lakers, who submitted the highest bid for the 32-year old. Per the LA Daily News:

The Bulls waived Boozer this week through the so-called amnesty provision, which requires the team to still owe his $16.8 million left on his remaining contract albeit without the money costing against the team’s salary cap. The Lakers’ bid price, which has not been reported at this time, offsets the balance that the Bulls still owe the 12-year NBA veteran.

Boozer averaged 13.7 points and 8.3 rebounds through 76 appearances with the Bulls, but he faced reduced playing time amid concerns about his defense. The Lakers currently have nine players under contract, including Kobe Bryant, Steve Nash, Robert Sacre, Jeremy Lin, Julius Randle, Nick Young, Ed Davis, Jordan Hill and Boozer. The Lakers also have non-guaranteed deals to Kendall Marshall and Jordan Clarkson, both of whom are expected to stay on the roster.

This move appears appealing for the Lakers both because of Boozer’s potential and his expiring contract. The NBA’s current labor deal prohibits players picked up through an amnesty claim, such as Boozer, to be traded at any point during the season.