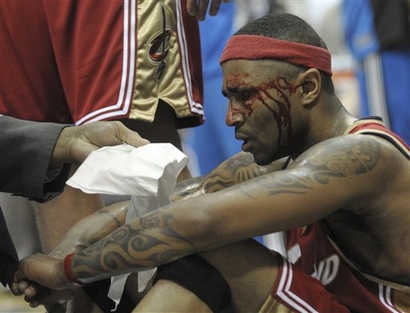 Mo Williams was not a happy dude during or after Game 3 of the Eastern Conference Finals. His team’s season was going down in flames, and his face had been turned into a bloody mess.

Anthony Johnson made a clumsy move into the lane midway through the second quarter last night, and in an attempt to create separation, slammed his left elbow into Williams’s face. In the postgame news conference, Mo let it be known of what he thought of Johnson. That is to say, not very much.

The Orlando Sentinel grabbed the quotes:

He needed four stitches to close cuts above and below his left eye, and was briefly taken to the locker room for treatment. When asked whether the hit was a cheap shot, Williams replied, “Most definitely.”

“That was the second time — you can recall the play when I dove out of bounds last game he gave me an elbow then,” Williams said. Williams said he has no previous history with Johnson, a reserve guard for the Magic.

Some bad blood is brewing between these two teams, and even though Williams claims that the elbow will have no carryover effects into Game 4, it’s pretty clear that Cleveland needs to start delivering some of its own hits.