The Nike Shox BB4s bounce into the KICKS Hall of Fame. 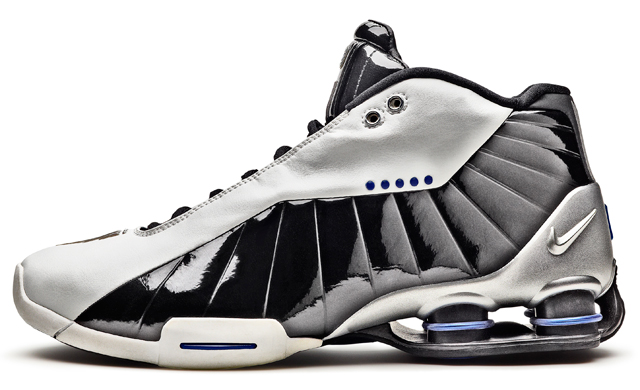 Vince Carter and Nike Shox. Nike Shox and Vince Carter. You can’t mention one without immediately thinking of the other.

Shox technology in Nike Basketball footwear—specifically the Shox BB4—and Vince Carter will forever be linked in history as their convergence culminated in what’s still known to this day as the greatest dunk ever.

In 2000, before a head-full-of-hair VC interrupted what was to be a transition opportunity for the French national team and forever shamed Frederic Weis, Shox technology was already a 20-year-old concept that used a revolutionary cushioning system to return energy upon the impact of the foot.

Like any basketball shoe featuring a space-aged advancement, the BB4 needed that player capable of taking it to the heights its rocket and booster-like appearance were created to explore.

“At that point, the Jordan era was over and here comes Carter dunking, abusing and embarrassing people every night with a variety of dunks,” says Chuck Swirsky, who now does play-by-play on the radio for the Chicago Bulls but was the TV p-b-p voice of the Toronto Raptors during VC’s prime. “It was every night, not every fourth night, to the point where he put basketball on the map [in] not only Toronto but Canada.”

Even though he played up in the then-basketball barren Great North and was only 23, the decision to send Carter to the Sydney Olympics was an easy one. After all, in ’99 he was named Rookie of the Year, and in February of 2000, VC put on a brilliant performance in the Dunk Contest. It made sense then that, in March of that year, when an injured Tom Gugliotta had to pull out of the Olympics, the fan-favorite Carter became the final member of Team USA.

Before departing to Sydney for the Games, after spending the NBA season as a sneaker free-agent because of a disagreement with previous sponsor Puma, Carter signed a multi-year deal with Nike. The timing would work out well for both parties, as Nike used VC to introduce the world to the brand’s Shox technology and VC used the Olympics to springboard to iconic status.

Aside from Carter, numerous other members of Team USA—namely Allan Houston, Antonio McDyess, Jason Kidd and Shareef Abdur-Rahim—rocked the BB4 throughout the Game. Let’s be honest, though: While it benefitted the BB4 to be on the feet of multiple players on the international stage, it was VC who helped make it so popular.

In the Games, Carter (inducted into this same HOF back in 2012) led the USA in scoring—and in highlights. Despite winning the Gold as a team, the defining moment of the US’ voyage was Carter’s elevation over Weis.

Le dunk de la mort, as the French termed it, isn’t just one of the best displays of insane verticality and blatant disregard for a 7-footer. It’s the lightning-in-a-bottle moment, where a budding performer executed an iconic feat at the right time on an international stage—while wearing the right shoe.

On the heels of the 2000 Olympics, the minds at Nike and Wieden+Kennedy quickly launched the “Boing” campaigns. That series of commercials featured Carter launching over a trash-talking Gary Payton and a jumbo-helmet-wearing football player, all while the sound of the spring-like Shox warned of Carter’s imminent acceleration and elevation toward the basket.

Truth is, after the Olympic showout, there probably wasn’t even a need for a commercial spot. The memorable ads only aided the buzz, though, as hoopers everywhere rushed to their nearest mall to grab a pair. They might not have gone to buy the BB4s, but minimally they went to see if you really boinged around in them. And for those truly caught up in the craze, you tried creating your own dunk-of-death moment at an open run.

Over the course of the next couple of years, Shox would continue to be a Nike/Carter fixture, both on the hardwood and on the commercial airwaves, as a total of five signatures were launched.

When it comes to the current Carter, both the Shox and nightly appearances on ESPN are long gone. Every now and then, though, the 37-year-old will serve notice to anyone who dares get in between him and the rim, just to remind us all that there’s still something left in the tank.

Still, there will never be another moment like the one in Sydney, where things came together so perfectly for all involved, minus Weis.

For that reason alone, the BB4 is an obvious choice for the HOF.

Catch up on the entire KICKS Hall of Fame here.