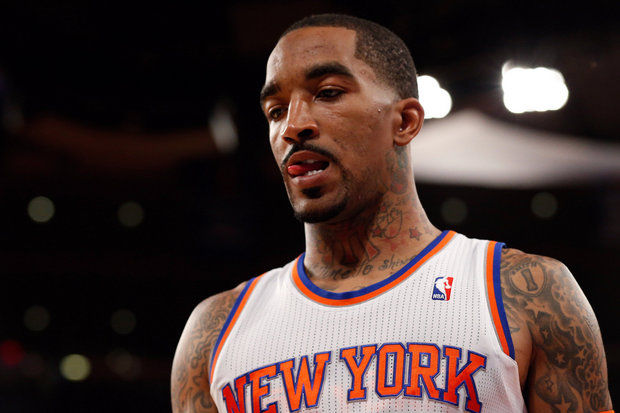 Phil Jackson and the Chicago Bulls stuck with Dennis Rodman despite an endless amount of drunken antics. Of course, The Worm’s Hall of Fame talent was enough to excuse his off-the-court behavior, and the three consecutive championships Rodman helped them win certainly helped.

Jackson, now overseeing the New York Knicks, says JR Smith’s clown act reminds him a bit of Rodman. What remains to be seen, is just how much patience and tolerance Mr. Zen will exercise with Smith. Per the NY Post:

Q: How do you plan to try to get through to J.R. Smith to put an end to all his immature on- and off-the-court antics?

A: “I don’t know if that’s possible or not. He might be one of those guys that’s a little bit like Dennis Rodman that has an outlier kind of side to him. But I’m gonna get to know him as we go along, and we’ll find a way to either make him a very useful player on our organization, or whatever.”

Q: Why did you take this challenge on, money aside?

A: “I didn’t have to come and take this job for the money. My brother who has Parkinson’s, and I have a brother who had Hodgkin’s are older than I am, they’re 73 and 75. And my brother sent out a book last year about the art of growing old and said, “Let’s talk about this book.” And one of the chapters that we discussed was about the fact that aging, you’re going through the same sequence of things that you go through in your other periods of your life. You go through toddler, you become an infant, child, and then your adolescence and then your young adult life, and then your parenting life, when you’re a husband or father, career, all that stuff. And then when you get to a certain age, you hope you have some wisdom, and you can give back what you’ve accumulated over a lifetime. It’s time to do that. And my fiancée, Jeannie Buss, has been whacking away at me for a while about, “You’re just kinda sitting on a lot of information.” I have friends here, I have a history here. This is a place that has the ability and the willingness to want to come back. It’s a priority for this fan core that we get back and become a competitive franchise. So all those things I thought were grounds for a wonderful return. I know that we were hampered in a lot of ways by salary cap and issues that went along with that, but I thought there’s gonna be a chance for this team to be really good.”