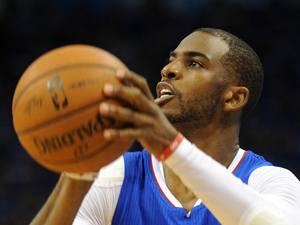 Each year, the finest lead guards in the high school game descend to Winston-Salem to learn from the NBA’s finest Point God. Chris Paul holds his annual CP3 Elite Point Guard Camp in mid-August, but don’t get it twisted, this is different from just about any camp that you may have heard of. Separate from the Nike Skills Academies, the namesake brings in his own staff to give the country’s best an idea of what it takes to reach his level of success.

CP3 took the time to stop and show the campers some of his tricks of the trade. Specifically, he really emphasized how to use your body to get the rock where you want it and then once you have the pill, how to utilize a jab step series to create space without even putting it on the floor. His hands on approach showed how genuine he was to give it back to the young guys, even telling them, “I don’t want you to be the next me, I want you to be better than me.”

Here’s a look at the top high school campers that we saw at the CP3 Elite Point Guard Camp:

After straight blowing up throughout the July evaluation period, Roach got to show his major game to those who missed him last month. He played lockdown D, both on the ball and by using his bounce to pin shots on the glass. Offensively, Kerwin used his sick first step to get to the rack and finish creatively at the rim. Perhaps the hottest name of the July evaluation period, the H-Town product showed that he could ball with the nation’s best in Winston.

The son of former Bulls lead guard Rick Brunson, it was no coincidence that Jalen had arguably the highest IQ of any guard in Winston-Salem. Despite not being the quickest guy on the block, he was super shifty with his moves and still had no problems getting by everyone to the rack. The lefty lived up to his rep too, showing why he’s arguably the best PG left on the board for 2015.

One of the youngest dudes in the event, Brown showed that he could hold his own with the nation’s finest lead guards. He used his size to finish above defenders, showed off sick court vision, and showed that he could hit J’s from outside when left open. Having just turned 15, most have already taken notice of Sin City’s next prodigy, evidenced by the fact that he visited Duke before he flew out of NC.

As one of the bigger lead guards in the camp, Simon immediately imposed his physical will on some of the smaller lead guards in the country. He used his length to block shots, threw some nasty dimes off of the bounce, and finished above just about everyone at the rack. Heading to Point Guard U. next year, he should be able to be next in line for the Wildcats.

The best sophomore in the D (now that Josh Jackson is gone) showed his midwest grit at CP3. He changed speeds to get to the rack, finished with both hands at the tin, and was flat out tougher than the majority of guys at the camp. With game like that, it makes sense as to why he’s one of the more sought after point guards in the stacked 2016 class.