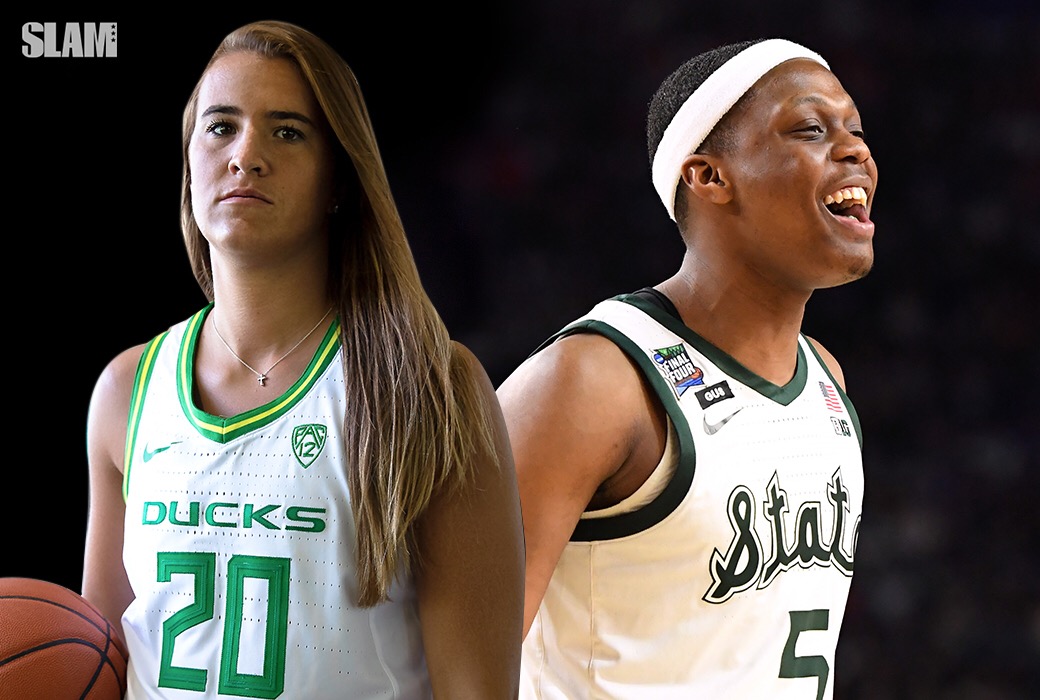 Now that Virginia has made (some) people forget its debacle against UMBC in the first round of the 2018 NCAA Tournament by winning it all last season, and Zion Williamson has moved on to NBA riches, we can set the scene for the ’19-20 campaign, which has a decidedly green-and-white Michigan State tint.

Green is the defining color on the women’s side, too, where Oregon and all-world standout Sabrina Ionescu look primed to hang their first-ever championship banner.

If point guard Cassius Winston isn’t the best player in the nation, the other guy is otherworldly. Winston leads an experienced MSU team that also features Joshua Langford and Xavier Tillman. And you know Tom Izzo’s squad will play great defense every night (or hear about it at high volume).

It was a busy offseason for the Jayhawks, but the hard work certainly paid off. The NCAA cleared big man Silvio de Sousa to play. Isaiah Moss transferred in from Iowa. Udoka Azubuike and Devon Dotson decided against heading to the NBA. It will take a while, but this will be a dangerous team.

Yeah, the five-stars (Tyrese Maxey, Kahlil Whitney) are coming to Lexington, but so is Bucknell transfer Nate Sestina. And Ashton Hagans is a first-rate point guard who’s returning. There are other holdovers, too, which means Johnny Cal won’t have to start from the jump this year.

There are quick turnarounds, and then there’s Louisville. The program was a giant wreck when Chris Mack took over. One great recruiting class later, and the arrival of St. Joe’s transfer Fresh Kimble, and the Cards could well win the ACC and reach the Final Four. Now that’s fast.

There’s not much new at Cameron Indoor Stadium in Durham, where Coach K welcomes another batch of freshmen prodigies to launch his annual assault on the ACC. But this year is a little different, because talented sophomore PG Tre Jones is back to help Vernon Carey Jr, Wendell Moore, Cassius Stanley and Matthew Hurt get comfortable, and Zion Williamson isn’t around.

The biggest news in Gainesville came during the summer when former Virginia Tech big man Kerry Blackshear Jr joined the band. He gives the Gators some needed inside pop, while skilled guard Andrew Nembhard leads the perimeter attack, and newcomers Scottie Lewis and Tre Mann fill in everywhere else.

This is the season Terps fans have been waiting for. There is talent all over the roster, beginning with PG Anthony Cowan but also including forward Jalen Smith. The freshman class includes a bunch of big men, and sophomore wing Aaron Wiggins has serious potential.

Here’s the definition of a perennial powerhouse: lose three players early to the NBA and still grab a top 10 rating. The Zags added grad transfers Admon Gilder and Ryan Woolridge for the backcourt and expect Corey Kispert to blossom up front. A bunch of four-star newcomers, led by center Drew Timme, will help.

What do you do when the top five players from your team leave? You get creative. Ol’ Roy Williams grabbed a couple of grad transfers (William & Mary’s Justin Pierce and Charleston Southern’s Christian Keeling) and a five-star late signee (guard Cole Anthony) to blend with holdovers in a potent concoction.

The Wildcats have the titles (2016 and 2018), and now they have the recruiting pop, thanks to a great class that includes guard Bryan Antoine (who may redshirt following shoulder surgery) and forward Jeremiah Robinson-Earl. They’ll work well with returning stalwarts Collin Gillespie, Saddiq Bey and Jermaine Samuels to keep ’Nova elite.

Come for Sabrina Ionescu and stay for the rest of the formidable Ducks, who made their first Final Four appearance last year. Ionescu is the nation’s best player, and she’ll get help from frontcourters Ruthy Hebard and Satou Sabally, along with sharpshooter Erin Boley, on the quest to win it all.

The Lady Bears will mount a national title defense with plenty of ammunition, particularly if Lauren Cox is back in time for the start of the season. Guards DiDi Richards and Juicy Landrum are terrors at both ends, and forward NaLyssa Smith should step up.

By this time next year, the Huskies will have a new/old home: the Big East. For now, UConn will scoff at predictions of a drop-off and return to the Final Four for the 97th straight year, or something like that. Crystal Dangerfield and Megan Walker will lead the way.

They don’t often do one-and-done in women’s ball, and that’s a good thing for Gamecock fans, who’ll get to enjoy a dynamite recruiting class for a few seasons. There’s a lot of young talent on the roster–hello, Aliyah Boston and Zia Cooke–and Dawn Staley is the perfect coach to bring it together.

Just about everybody is back in College Station, especially high-scoring guard Chennedy Carter, the nation’s runner-up in points. The Aggies haven’t made it to the Final Four since they won it all in 2011, but this loaded team looks ready to end that drought.

All the Terps did was add the nation’s top high school point guard (Ashley Owusu) to a lineup that includes high-scoring Kaila Charles, sharpshooter Taylor Mikesell and 6-5 Shakira Austin. The Big Ten is officially on notice. The rest of you are playing for second place.

From 2008-14, the Cardinals made six Final Four appearances. It might be time for another. No. 1 overall recruit Haley Jones joins guards Kiana Williams and DiJonai Carrington in a potent lineup that should be strong enough to challenge Oregon for the top spot in the Pac-12.

While ’Cuse fans will certainly miss Tiana Mangakahia, who’s taking the season off as she gets treatment for cancer, the Orange doesn’t need to fear. Digna Strautmane and a bunch of experienced returnees are around. This squad could be your ACC champs…and more.

OSU fans will spend the season clamoring for 6-9 redshirt freshman Andrea Aquino, and why not? But the key to the Beaver’s success—beyond a redwood-style front line that also includes 6-7 Patricia Morris—is the backcourt, which is led by junior point guard Destiny Slocum and has depth and versatility.

On paper, it looks like the Bulldogs are in trouble because of some critical losses, but Vic Schaefer has a lot of talent ready to embrace larger roles, like Andra Espinoza-Hunter and Promise Taylor, who defected to Starkville from Mississippi. The youngsters need to step up, but they can handle the responsibility.

Photos by Ashley Walters and via Getty.