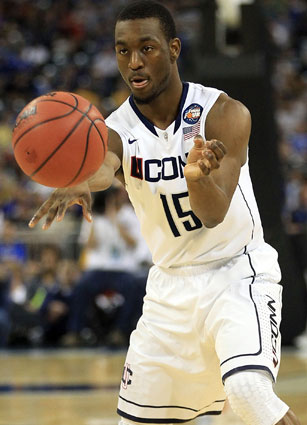 It all comes down to this: The Big Guy, UConn, against the little guy, Butler, for the 2011 NCAA National Championship.  CBS doesn’t like the matchup and the casual fan/Vegas degenerate gambler doesn’t like the pairing either.  But for the rest of us, it’s all about competition and the chance to see a mid-major topple a Big East powerhouse.  All signs point to a UConn runaway W, but it would be wise to not count out the Bulldogs.  They made it all the way back to the title game after falling to Duke last year.  They are hungry and they want revenge.  The only thing standing in their way is Coach Jim Calhoun and his Bob Cousy Award-winning PG, Kemba Walker.  If Jeremy Lamb plays to his ability, it could be a long evening for Butler.  But Shelvin Mack and Matt Howard will most certainly bring their “A” game.  Look for them to neutralize UConn’s big two and give those rooting for the underdog something to scream about.

No. 3 UConn Huskies vs No. 8 Butler Bulldogs

Here’s something that strikes me immediately as I look out into the crowd: there are a lot of empty seats.  I think the bulk of tickets went to majors like Kentucky, with VCU coming in second or third.  Hopefully, people are just grabbing popcorn and it really is full in here.  Makes for a better game that way.

LeAnn Rimes for the National Anthem.  She killed it.  Nice!

Shelvin Mack gets the loudest applauses of the Butler squad.  That sounds about right.  Kemba Walker hears it from the UConn contingent.  Little known fact about Kemba: He will graduate this May after only three years on campus.  He’s killin’ it on the court and in the classroom.

And here we go.  UConn controls the tip.

Butler for three!  Oriakhi answers on the other end.  Butler is falling in love with the three.  That may be their downfall.

Neither team able to get it going offensively.  And just as I typed that, Howard drains a triple.

Kemba and Mack are both scoreless right now.  And as I typed that, Kemba goes for back to back buckets with a possible And-1.

Interesting fact: This is the 2900th all-time game in the NCAA Tournament.

Kemba’s making his way to the scorer’s table to check back in.  Bad forced shot by Kemba.  Mack still has no scored for Butler.  He’s back in the game now.  Let’s see if he can get it going.

Very bad pass or great defense?  You make the call…

That free throw was Mack’s first point of the game.

That was a LONG three ball for Stigall.

Obviously, Stigall has the green light to shoot it from deep.

Mack with a long triple of his own.  Is he about to turn up the heat?

Really like Napier’s game.  He’s only going to get better.

Ok, I’m awake now, I guess.  Let’s hope this is a better half of basketball.

That was Lamb’s first two points of the game.  This is the wrong game for Silence of the Lamb…

Kemba with the nice step back deuce.  Lamb finally ends the drought and nails a triple.  UConn up 26-25.

Napier with the momentum killing turnover there…

Kemba with the missed opp for a three-point play.  He’ll shoot two.

This game has definitely been a snoozer.  There’s something to be said for the Big Conference schools.  At least they bring some excitement.

Mack needs to get more touches if Butler wants to get the W.  Lamb gets the ONLY dunk of this game so far on that fastbreak.  UConn leads it 31-26.

UConn is controlling the boards right now.  Butler is in trouble.  With 6:49 left to play, it’s UConn up by 13.

Butler crowd erupts on that put back.  Oriakhi with the two-hander and the foul.  UConn still up by 13 with 5:49 to go.

Howard to the FT line to shoot two.  Will this get him going?  Will it get Butler going?  Vanzant gets the three ball to go.  UConn by 11.

UConn’s interior defense is stifling right now.  And Butler can’t buy a bucket or a rebound.

UConn is looking to run down the clock.

Kemba steps to the line and sinks both FTs.  UConn up by 12.