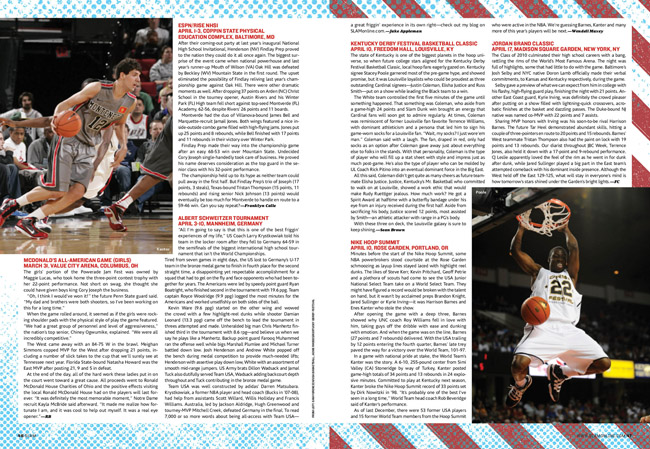 When the bright lights came on and the actual game went live on ESPN, the Class of 2010 Punks went hard. This wasn’t your ordinary all-star game filled with uncontested breakaways and AND 1 mixtape plays. These dudes took pride in repping their side.

“It all started on the bus,” 6-11 Baylor recruit Perry Jones said. “We all started talking a little ish and were excited to go out there and get the win.”

Jones started off slow but had some sick jams down the stretch for the East. Future Duke point guard and Jersey kid Kyrie Irving was the best playmaker in the game, scoring and getting the ball to everyone in the right places. The tough man award had to go to

Tennessee signee Tobias Harris, who dropped 13 points in 12 minutes while playing with a broken bone in his foot. For the West, 7-0 Fab Melo was the defensive star after posting a workman-like 7 boards, 4 dimes and 3 blocks. Do-it-all Portland native Terrence Jones had 14 points while playing all five positions on the court.

Hometown kid and future Buckeye Jared Sullinger won MVP for the East, after dropping 22 and 7 and showing his ability to stretch the D with his outside jumper. For the winning West squad, UNC-bound SLAM Diary keeper Harrison Barnes got the award for being top dog with his 18 points. But it was SLAMonline’s McDonald’s Game blogger, Brandon Knight, who came up big in the clutch. After struggling early, Knight got the rock, drove right, and may or may not have pushed off before drilling the game winning three for the West with three ticks left on the clock. “You’ve got to have confidence in your shot, no matter what,” Knight said. “I went up with confidence and it worked out.”—Rodger Bohn

McDonald’s All-American Game (Girls)
March 31, Value City Arena, Columbus, OH
The girls’ portion of the Powerade Jam Fest was owned by Maggie Lucas, who took home the three-point contest trophy with her 22-point performance. Not short on swag, she thought she could have given boys king Cory Joseph the business.

“Oh, I think I would’ve won it!” the future Penn State guard said. “My dad and brothers were both shooters, so I’ve been working on this for a long time.”

When the game rolled around, it seemed as if the girls were rocking shoulder pads with the physical style of play the game featured. “We had a great group of personnel and level of aggressiveness,” the nation’s top senior, Chiney Ogwumike, explained. “We were all incredibly competitive.”

The West came away with an 84-75 W in the brawl. Meighan Simmons copped MVP for the West after dropping 21 points, including a number of slick takes to the cup that we’ll surely see at Tennessee next year. Florida State-bound Natasha Howard was the East MVP after posting 21, 9 and 5 in defeat.

At the end of the day, all of the hard work these ladies put in on the court went toward a great cause. All proceeds went to Ronald McDonald House Charities of Ohio and the positive effects visiting the local Ronald McDonald House had on the players will last forever. “It was definitely the most memorable moment,” Notre Dame recruit Kayla McBride said afterward. “It made me realize how fortunate I am, and it was cool to help out myself. It was a real eye opener.”—RB

ESPN/Rise NHSI
April 1-3, Coppin State Physical Education Complex, Baltimore, MD
After their coming-out party at last year’s inaugural National High School Invitational, Henderson (NV) Findlay Prep proved to the nation they could do it all once again. The biggest surprise of the event came when national powerhouse and last year’s runner-up Mouth of Wilson (VA) Oak Hill was defeated by Beckley (WV) Mountain State in the first round. The upset eliminated the possibility of Findlay reliving last year’s championship game against Oak Hill. There were other dramatic moments as well. After dropping 37 points on Arden (NC) Christ School in the tourney opener, Austin Rivers and his Winter Park (FL) High team fell short against top-seed Montverde (FL) Academy, 62-56, despite Rivers’ 26 points and 11 boards.

Montverde had the duo of Villanova-bound James Bell and Marquette-recruit Jamail Jones. Both wings featured a nice inside-outside combo game filled with high-flying jams. Jones put up 25 points and 8 rebounds, while Bell finished with 17 points and 11 rebounds in their victory over Winter Park.

Findlay Prep made their way into the championship game after an easy 68-53 win over Mountain State. Undecided Cory Joseph single-handedly took care of business. He proved his name deserves consideration as the top guard in the senior class with his 32-point performance.

The championship held up to its hype as neither team could pull away in the first half. But Findlay Prep’s trio of Joseph (17 points, 3 steals), Texas-bound Tristan Thompson (15 points, 11 rebounds) and rising senior Nick Johnson (13 points) would eventually be too much for Montverde to handle en route to a 59-46 win. Can you say repeat?—Franklyn Calle

Albert Schweitzer Tournament
April 3-10, Mannheim, Germany
“All I’m going to say is that this is one of the best friggin’ experiences of my life,” US Coach Larry Krystkowiak told his team in the locker room after they fell to Germany 64-59 in the semifinals of the biggest international high school tournament that isn’t the World Championships.

Tired from seven games in eight days, the US lost to Germany’s U-17 team in the bronze medal game to finish in fourth place for the second straight time, a disappointing yet respectable accomplishment for a squad that had to gel on the fly and face opponents who had been together for years. The Americans were led by speedy point guard Ryan Boatright, who finished second in the tournament with 19.6 ppg. Team captain Royce Woolridge (9.9 ppg) logged the most minutes for the Americans and worked unselfishly on both sides of the ball.

Kevin Ware (9.6 ppg) started on the other wing and wowed the crowd with a few highlight-reel dunks while shooter Damian Leonard (13.3 ppg) came off the bench to lead the tournament in threes attempted and made. Unheralded big man Chris Manhertz finished third in the tournament with 8.6 rpg—and believe us when we say he plays like a Manhertz. Backup point guard Farooq Muhammed ran the offense well while bigs Marshall Plumlee and Michael Turner battled down low. Josh Henderson and Andrew White popped off the bench during medal competition to provide much-needed lifts; Henderson with assertive play down low, White with an assortment of smooth mid-range jumpers. US Army brats Dillon Wadsack and Jamal Tuck also dutifully served Team USA, Wadsack adding backcourt depth throughout and Tuck contributing in the bronze medal game.

Team USA was well constructed by adidas’ Darren Matsubara. Krystkowiak, a former NBA player and head coach (Bucks in ‘07-08), had help from assistants Scott Willard, Willis Holliday and Francis Williams. Australia, led by Jackson Aldridge, Hugh Greenwood and tourney-MVP Mitchell Creek, defeated Germany in the final. To read 7,000 or so more words about being all-access with Team USA—a great friggin’ experience in its own right—check out my blog on SLAMonline.com.—Jake Appleman