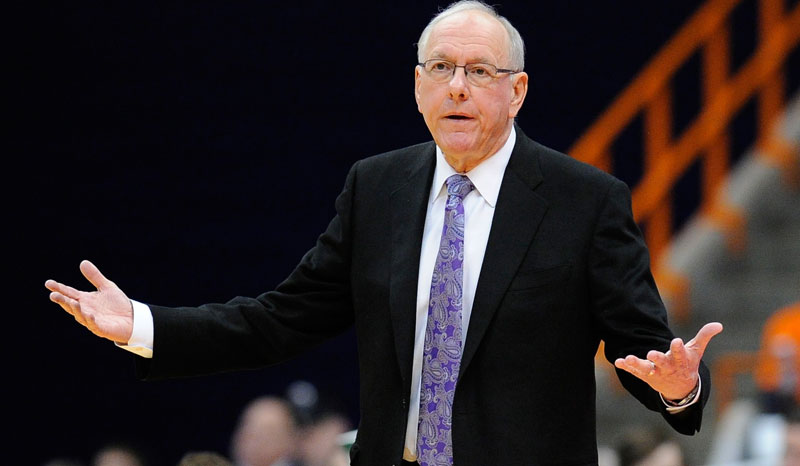 Syracuse basketball faced a bit of an uphill road if it wanted to make the 2015 NCAA Tournament. The squad is 15-7 this year with a 6-3 mark in the ACC. However, no matter how the team finishes this year, it will not play in the postseason. The university announced today that it will impose a postseason ban on its basketball team this year. According to Syracuse.com, the team will not play in the NCAA Tournament, the NIT or the ACC Tournament due to the ban.

Syracuse University, in response to an NCAA investigation, has self-imposed a ban on its men’s basketball team from postseason play this season.

The university announced this afternoon that it had previously notified the NCAA of the ban as part of its pending case before the NCAA Committee on Infractions.

SU imposed the ban “as a further means of acknowledging past mistakes,” the university said in a news release.

“I am very disappointed that our basketball team will miss the opportunity to play in the postseason this year,” SU basketball coach Jim Boeheim said in the release. “However, I supported this decision and I believe the University is doing the right thing by acknowledging that past mistakes occurred. Our players have faced adversity and challenges before. I know they will rise to this challenge by keeping our program strong and continuing to make our University proud.”

He cited his particular disappointment that senior Rakeem Christmas won’t be able to end his career with postseason play.

SU initiated the investigation when it self-reported potential violations to the NCAA in 2007, the news release said.

“Much of the conduct involved in the case occurred long ago and none occurred after 2012,” the release said. “No current student-athlete is involved.”