Things aren’t looking too good in Georgetown these days. After another losing season for the Hoyas, there’s lots of talk surrounding the future of the program. Reports have surfaced that head coach John Thompson III might be on the hot seat, with his future at Georgetown in jeopardy. For the third time in four years that Hoyas will not be making the NCAA Tournament. And now there’s even reports of former players stating anonymously that there needs to be a change in the program but that players are afraid to speak up at Georgetown because of the big influence that Thompson III and his legendary father carry. The first round exit in the Big East Tournament at the hands of St. John’s only ignited more speculation.

With all that in mind, top-40 recruit Tremont Waters, a 6-0 point guard who committed to the program last October, has requested a release from his letter of intent. He made the announcement via Instagram on Saturday night. 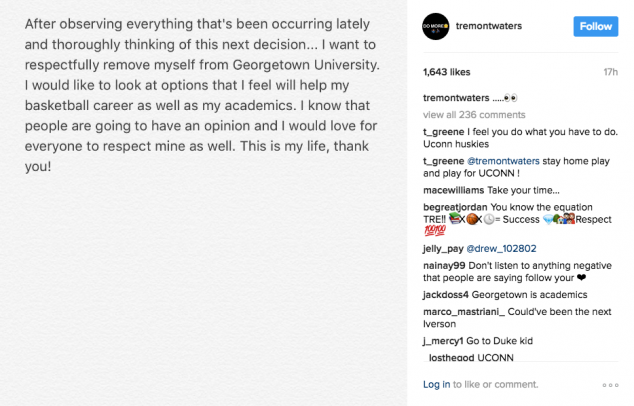