The Chino Hills senior guard, who's averaged a triple-double for the season, continues to pile up accolades. 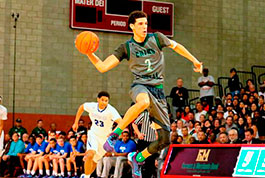 A day after being awarded with the Morgan Wootten Player of the Year honor, Chino Hills guard Lonzo Ball, who is headed to UCLA next season, was also named the Naismith High School Player of the Year on Thursday morning. The triple-double machine has led his Chino Hills squad to the No. 1 slot on the national rankings this season.

See below for the press release from the Atlanta Tip-Off Club:

Ball is averaging a triple-double this season with 25.4 points, 12.9 assists and 11.5 rebounds per game. His exceptional play led the Huskies to the team’s first Southern Section championship, and they have advanced to the Open Division bracket of the CIF state playoffs. Ball is now the third high school award winner to go on to play collegiately at UCLA, following Shabazz Muhammad (Bishop Gorman High School, Las Vegas) in 2012 and Kevin Love (Lake Oswego High School, Lake Oswego, Oregon) in 2007.

Young graduates from Princeton Community High as the all-time leading scorer (3,268 points) of either gender in the state of Indiana. The accomplishment garnered her recognition from the Indiana General Assembly. From November 2014 to February 2016 she led the Lady Tigers to 53 consecutive wins. Young is the team leader in field goal percentage, rebounds, free throw percentage, assists and steals. She will go on to play collegiately at the University of Notre Dame, following another Naismith Trophy winner who hailed from Indiana, Skylar Diggins (Washington High School, South Bend) who won the award in 2009 and went on to play for the Irish.

“Lonzo has truly earned this award by his unbelievable work ethic which has prepared him to display his gifts and talents at the highest levels”, said Chino Hills coach Steve Baik, who was named the 2016 Naismith High School Boys Coach of the Year. “Our schedule this season was one of the toughest and most challenging featuring the nation’s top players and teams. He was simply amazing proving himself to be one of the best players in the nation and also leading his team to victories all season. Lonzo’s leadership by example and unselfishness on and off the court are what set him apart. On the court he focuses on the team goals above his own. Off the court he takes care of his family, teammates and community. He is truly an amazing talent on the court as he has helped us accomplish more than we could ever dream of. However, I’m more proud of the young man that he has become! I’m so excited to see the amazing things he will accomplish in the future!”