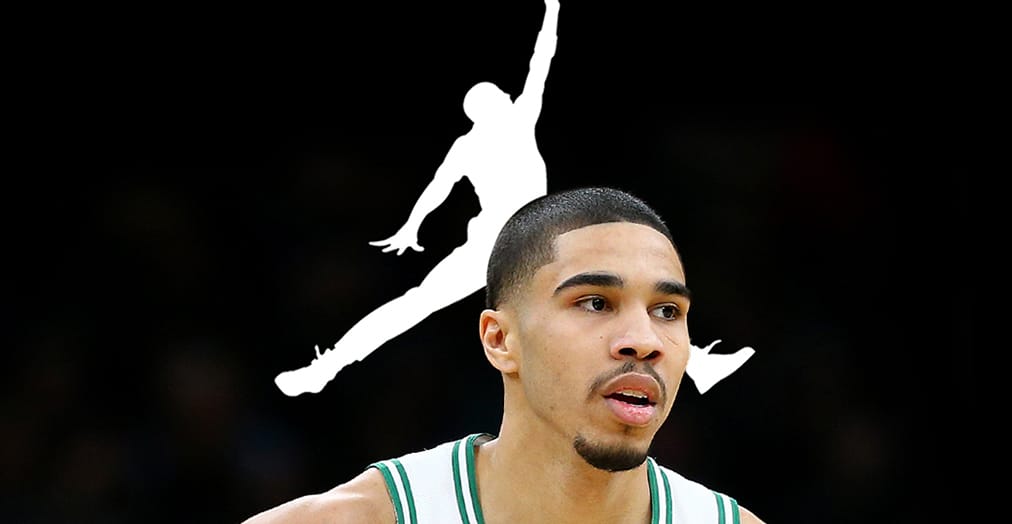 Jayson Tatum walks into an upstairs room at a house in Paris, France. The digs have been rented out by Jordan Brand. Tatum sits down at a couch, stretches out in a pair of volt Flyknit Air Jordan IVs and talks about the news that he’s signed with the Brand.

“It was more of Jordan reaching out,” the 21 years old says. “Nobody signs with Jordan without getting his approval so just having that honor of having him reaching out, wanting me to be a part of the Brand… He’s the greatest player of all time so that was a no-brainer.

“He represents just, like, a larger-than-life figure,” Tatum continues on Jordan. “He’s been done playing for 20-plus years and the shoes still sell. Guys like myself that never got to watch him play live—I was born in ’98—but just from highlights and documentaries and things still knowing that he was the greatest.”

The first two seasons of Tatum’s career saw him evolve into one of Nike’s cornerstone athletes. He was given the keys to the Kyrie line as a rookie when Irving was hurt, debuting several high-profile Kyrie 4 colorways in the 2018 playoffs. Then as a sophomore he was the man behind the Adapt BB. He was the first player to wear them in-game and he went on to receive a handful of PEs of the auto-lacing sneaker.

“I’m excited about just bringing my creativity over and telling them stories,” Tatum says. “Any chance I get I like to shed light on St. Louis, where I’m from. Kind of give my background and give kids hope that it doesn’t matter where you come from, if you love it or you work hard enough then you can achieve whatever.

“It’s crazy,” he continues. “Five years ago I couldn’t imagine being in the position I’m in now. Signing with Jordan, here in Paris, it’s just not something I really thought about when I was growing up in St. Louis. Like, I’m gonna go to Paris, I’m gonna sign with Jordan, I didn’t think that was a reality.”

A few moments after he gets up from the couch in the upstairs room he walks downstairs and joins a handful of Jordan Brand’s top talent. He squeezes in for a photo that also features Maya Moore, Kemba Walker, Carmelo Anthony, Blake Griffin, Russell Westbrook and the man himself.

“Probably when I was in, like, fourth or fifth grade I really started sitting down and watching Jordan film and highlights with my dad. Kobe was always my favorite player and he was like, ‘That’s cool, but you need to understand who Michael Jordan is.’

“His impact is hard to describe. He is undeniably the best ever, and you know you can go to any country in the world and they’re wearing Jordans.”

“Yeah, France, they’re wearing Jordans,” he says with a smile.

Tatum goes on to say that his favorite retro Js to play in are Xs while his favorite to walk around in are Is. And he’ll be hooping in the Air Jordan XXXIVs by the time next season starts.

“I’ve had Jordans since before I could walk,” he says. “Not that I really remember, but I’ve got pictures in the house where I got on Jordans.”

Now he’ll have pictures in NBA where he has on Jordans.