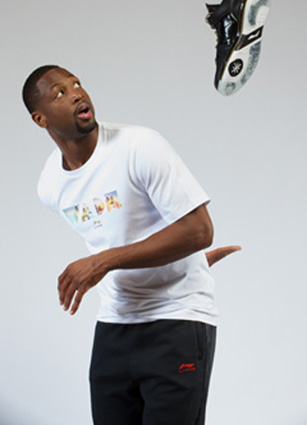 The surprising partnership between Dwyane Wade and Chinese brand Li-Ning started with one simple question:

“Dwyane Wade was a name that we knew whose contract was going to be up,” says Brian Cupps, Li-Ning’s Brand Initiative Director of Basketball. “And based on our feedback and research, he resonated with our consumer base and had a shared vision of who we are as a brand as both a person and player.

“We started to think about and conceptualize about ‘What if?’ What if the opportunity were to arise for us to sign a guy of his magnitude? How would we be able to deliver products that are inspired by him and reflect the person he is on and off the court?I think we’ve done a great job in making sure that we were prepared, knock on wood, it happened and we’re excited to do big things together.”

With a lot of hard work and careful planning, that “What if?” became a reality as it was officially announced today that Wade would be the Chief Brand Officer of his own WADE product line and, in effect, become Li-Ning’s biggest spokesperson.

“You’re always surprised when someone says yes in a deal with the magnitude of this because you don’t know exactly what drives and motivates another person to say I want to take a chance and do something big and I’m not afraid of the risk,” explains Cupps.

What makes Wade’s deal with Li-Ning most alluring is the amount of creative control and input he will have on the company’s product. As mentioned earlier, Wade will serve in an official capacity as Chief Brand Officer and be responsible for guiding the creative direction of all WADE products. DWade will also have a hand in marketing strategies and will be instrumental in selecting the athletes that he feels fit the philosophy of the brand as a whole—a role that is usually non-existent with other shoe companies.

“We don’t offer the level that Dwyane is getting to just any athlete,” says Cupps. “We certainly want to get input from our athletes and endorsers. If we want to be true and authentic to the sport performance, what better way to do that than to listen to the guys who make their living making sports?”

With DWade on board, Li-Ning has found the face of their brand and automatically becomes a much bigger player in the competitive world of Kicks.

While out in Beijing, an excited Wade took the time out to give SLAM the scoop on his newest venture.

SLAM: First and foremost, congratulations. What was the biggest factor in your decision to sign with Li-Ning?

Dwyane Wade: I had an unbelievable opportunity to represent a brand in Converse that was coming out of bankruptcy when I signed with them and I think I changed people’s view on them when it comes to basketball in the few years I was there. Then I moved on to Jordan which was the popular choice for everyone, even me, and I had a good three years there. Michael Jordan has built an unbelievable legacy. Going from there to Li-Ning and having the opportunity to build my own legacy, an opportunity I didn’t have before with Converse and Jordan, was something I couldn’t pass on. I’m about making a change. I’ve always been about doing something different and helping change the perception of places like Marquette University, like the Miami Heat when I first came in, whether it was Converse or something corporate. Whatever the case may be, whether it’s fashion and wearing pink pants (laughs), just changing the perception.

I had an unbelievable opportunity to do this here with a brand that is a big, huge brand in itself. It doesn’t have the “cool” factor in the States just yet, but hopefully we can change that perception too.

SLAM: It’s easy to go with a brand or a trend that everyone else is going with. With Li-Ning, you’re paving your own path, not many people can claim that…

DW: You want to be part of something, everyone does. I felt that being a part of this was something that I couldn’t pass up on. It’s going in a different direction and like I said, I had an unbelievable run under the Nike umbrella but I felt I had to go in this direction. I have a title, man! My title is Chief Brand Officer, that means I have work to do. I have to keep my eye out for players to help build this brand. I’ll be helping this brand even when I’m done playing and having my own brand similar to Jordan. This was just something that I wanted to do, it’s something I’m excited about. It’s a new beginning, a new era, a new opportunity. The NBA is about going global, they take us global and they’ve done an unbelievable job making our game huge and now I’m leading a global brand. There are billions of people in China and now I’m a part of them in a sense. It’s been very cool being out here in China and feeling the love and appreciation and having others understand why I chose this brand.

SLAM: So basically, this isn’t a five-year situation, this is a 10-15 year decision that’s setting up a post-career venture.

DW: This is what you call a lifetime relationship. I have my own brand within the Li-Ning family, so hopefully my brand will live on for years if I pick the right players to represent.

I’m a father first and I have to make sure that I continue to make decisions and moves that my kids can be proud of and can see as well and have them understand that you don’t necessarily have to stick to the status quo. You don’t necessarily have to do what everyone else is doing because it’s the cool thing. Sometimes you have to leave home to find yourself and that’s what I did here. I’m happy and I’m confident in what we’ll be able to do. I think my versatility will show a lot more now with the creative control over what product comes out to the market.

SLAM: You were saying it’s really cool being out in China, and I spoke to Brian Cupps earlier and he said the response today at the Li-Ning store was overwhelming. Were you surprised by that at all?

DW: You never know what to expect. You don’t go into things expecting hundreds of people waiting outside for you for two and a half hours. I’m just humbled. I know where I come from and I know the kid that I was. Before the press conference, I got emotional about being that kid from Chicago, Illinois and being told that I was never going to make it out and I had never seen anyone make it out. I thought about what I’ve been able to accomplish in a short period of time and now look where I am. I’m leading a global brand.

It’s heartwarming to me and to go out there to the Li-Ning store and see hundreds of people outside was unbelievable. They really wanted me to know how important and how much this means to them and how much it means to their culture and I really felt it.