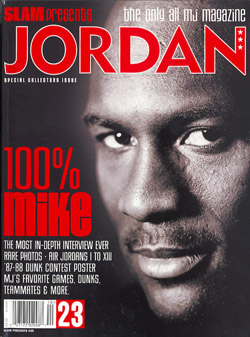 This may be the simplest thing I’ve ever written on here: Give the people what they want.

In the summer of 2009, in honor of Michael Jordan’s induction into the Hall of Famewe put out our first 100% Jordan issue in more than a decade (the first one doesn’t really exist online, though I’ve tacked in a sort of faded jpeg at right; the ’09 one, which you should remember, was featured on this site and many other places, too.). To put it simply, the issue was a runaway success. Sold out of a bunch of stores, sold more copies than anything else we did in 2009, got love via snail mail, email and all over the internet. All of us here at SLAM were proud of the product, and proud of how well it was received.

The truth is, the sales figures alone might have been enough for the financial powers that be who run SLAM to put another MJ issue out. And I wouldn’t have had a say in the matter. But then the craziest thing happened. Or rather: what would have been the craziest thing for any athlete other than Michael Jordan happened. He went out and stayed arguably the biggest name in basketball.

In 2010 alone, Mike has: become majority owner of the Charlotte Bobcats, gone into the Hall of Fame as a member of the Dream Team, served as presenter for ex-teammate Scottie Pippen’s own entry into the Hall, and, most significantly from a pop-culture perspective, been put on the cover of NBA 2K11, an insane honor for a guy who hasn’t played in more than five years. With the recent announcement from EA Sports that release of their own ballyhooed game, NBA Elite, is on hold, Mike is going to have the video-game consumer on lock for at least the next month.

All this to say, why shouldn’t we put out another issue. So here’s the deal: you’ve got all the same feature stories that ran in our ’09 version, plus a new table of contents, a new Editor’s Letter, and 16 new pages of Mike, including stories on him as an owner and as a star for Team USA (which he’d been long before anyone uttered the phrase “Dream Team.”)

Plus, a sick twist on last year’s cover: shiny gold.

You know what to do…