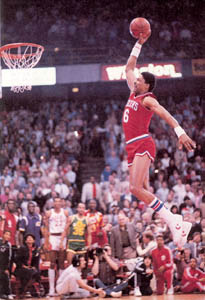 In the mythology of the ABA, there are many gods. Mighty Artis Gilmore smote rivals with a strength that came in equal parts from his 7-2 frame and his majestic afro.

Sleek George Gervin slithered through the league with his icy-cold effectiveness. David Thompson seemed to drop down from the heavens before every game and then spend 48 minutes trying to return there.

And then there was the red-white-and-blue-clad Zeus, one Julius Winfield Erving. Doctor J was more than just the ultimate ABA showman. He was The Bridge, the man who helped keep pro basketball alive during the 1970s, when the game was fast-and-loose in both leagues and even the TV networks didn’t want to watch. Two straight Finals showdowns between the Bullets and Sonics just didn’t fire up the public. Thank goodness fans could tune in and watch Doc perform on Sunday afternoons.

Though there was a brief dalliance with adidas when he played for the New York Nets, Doc was a Converse man from his earliest days with the Virginia Squires, when he favored the old, high-high Chucks. By the mid ’70s he’d graduated to his own brand, just another reason why there was no one above him in the ABA hierarchy. Clyde Frazier had his Puma signature shoe, a sure-fire indication of his high-stylin’ ways, and the Doctor had his. Each defined cool in his league. When the ABA finally took its last breath, following the ’75-76 season, and a merger with the Establishment seemed imminent, there was one grand prize: Erving. And the Sixers got him. In a flat-out desperation move to acquire the cash needed to pay off the Knicks for the right to move into their hood, the Nets sold their only asset. They would be cursed forever after, never again to replicate the championship path they took in ’76. It was sad for Nets fans, but the NBA was a better place for the move.

Not that Dr. J necessarily belonged in Philly. He was a New York boy and played his high school ball at L.I.’s Roosevelt HS. But if the best player on the planet was going to land in big brother’s backyard, he shouldn’t be coming in wearing little bro’s colors. Erving’s move to Philadelphia was evidence that the NBA knew he was a significant piece of the puzzle. Mingling him with one of the League’s franchises showed that the merger was for real—and a damn good idea. And so the curtain went up. Minutes before the Doctor made his first-ever house call in the Spectrum, a Sixers season-ticket holder presented him with a black bag, filled with various medical implements. Then Erving went to work.

His first few years in the League were filled with jaw-dropping, did-you-see-that moments. Even his teammates weren’t always sure what to expect, and the no-look passes which bounced off their hands and heads proved it. Erving ABA-ified the stodgy Association, raising the dunk to an art form and embarking on unscheduled flights into arena stratospheres that brought fans and rivals face-to-feet with those Converse sleds. The Sixers may have been on the move before his arrival, having qualified for the playoffs for the first time in five years the previous season. Erving accelerated the process, lifting the franchise to 50 wins and ultimately the NBA title. In the process, the Sixers bumped off the Celtics, closing Boston’s two-decade run of dominance and injecting much-needed energy into a wheezing League. Philadelphia didn’t win the title in ’77—and wouldn’t capture one with Erving until six years later—but it had become the League’s greatest show by out ABAing the four surviving franchises from the dearly-departed confederation.

By the early ’80s, Magic and Bird had made the scene, and the League had a bi-coastal, made-for-ratings rivalry it could sell to sponsors. Still, Doc wasn’t going anywhere. He waged annual wars with the Lakers and Celtics, lifting Philly to within clear sight of the mountaintop in ’80 and ’81, before finally scaling the summit (with a big assist from former ABA standout Moses Malone) in ’83. By then, Magic and Bird were with him on the Converse team, and their signature models created quite a sensation. And though they achieved legendary status, each owed a sizeable debt to Erving, whose remarkable game had convinced the NBA to celebrate the individual, as well as the franchise.

And brought a basketball god into the nation’s midst.