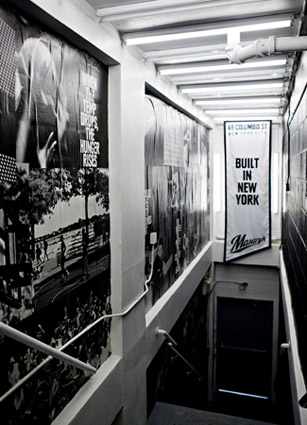 The experience starts dramatically. I’m on an obscure street I’ve never even heard of in one of the most remote corners of Manhattan island, hard by the Williamsburg Bridge. I approach an old, gray-brick building, with a burly doorman standing sentry like I’m waiting to get into an exclusive club. Which, in a way, is exactly what I’m doing. Once the doorman checks me off the list, I ring a little buzzer. “Welcome, Masaryk member,” greets the concierge.

And then up the stairs I go. Into what is one of the best-looking basketball gyms I will ever set foot in.

So what is the story behind this mysterious space called “Masaryk,” which will be open to Nike-invited members and their friends through the end of April?

In Masaryk’s first month of operation, I’ve already been lucky enough to be in there a couple of times. The first actually, had the least context. Armed with little more than an emailed invite that asked for names and sizes, nine members of the extended SLAM fam and I got a tour of the gym, outfitted in the Kobe VII System Supremes (honestly, the best basketball shoes I’ve ever played in), put through a workout by Masaryk’s lead trainer Daryl “D-Train” Smith and allowed to play on the pristine floor for a good 40 minutes. One of my colleagues, Shanti Garcia, explained how he found that experience on his blog.

So we all had an amazing two hours in the gym, but Nike was pretty sparse with the details. In a way, I respect that. They re-did a gym, they’re inviting lots of people to play in it, they’re showing off some of their new product. What more needs to be said?

Well, I’m a reporter (or at least used to be). And I had questions.

About 10 days after getting to run at Masaryk, I went back for an “Orientation Session,” note pad in hands.

I ran into my main man Bobbito Garcia and started getting his take on it. Bob, a city hoops legend in his own right, started telling me stories about playing in the exact space many years ago, when it hosted tournaments regularly. “It was a great gym, and I must say, I played some great games here,” Bob said with a smile. To hear Bob explain it, this very gym, owned by the adjacent mixed-income apartment complex known as Masaryk Towers, had once been one of the hotspots for hoops in the LES.

While the assembled members chatted amiably and enjoyed some free food and drink, the folks from Nike Basketball East set up seats and began to give a little background. Will Perkins, Marketing Specialist for Nike Basketball East, was first on the mic. “This has been a labor of love the last several months,” he says. “We wanted to make a space that was visually compelling and an environment that the entire basketball community in New York could benefit from.”

To this, I say to myself, “Mission accomplished!”

Even in this setting, though, Perkins and his colleague, Brand Manager of Nike Basketball East Damian Bulluck, are pretty sparse with the details. They are humble about what Nike did to this space, and seemingly more concerned that the members just get the absolute most out of the space. And the membership perks are legit. Basically, through a password-protected website and a dedicated phone line, we can call up to two weeks in advance to reserve the gym either for a workout or a run, and we can bring non-members along for the experience. And all we need to bring is our Nike kicks; Masaryk’s got balls, a scoreboard, a dope locker room, and clean jerseys and shorts waiting for every member and guest when they show up to play.

As a member, I leave the orientation excited and grateful. As a writer, though, I still had more questions. With the help of Brian Strong from Nike Communications, I set up a conference call with Bulluck and Perkins to get some more info about Masaryk.

Here’s some of the highlights of my q+a:

SLAM: What was the genesis of this whole idea?

Damian Bulluck: We’re trying to have a conversation with New York City’s basketball community. It’s a relationship that has been growing, and we felt like this was the next step.

Will Perkins: “We’ve done a great job of energy spaces before, and we wanted to make this a performance energy space. It is all about reaching basketball players.”

SLAM: Why’d you pick this gym?

DB: A bunch of heads we’re cool with—PR [Nike Global Brand Manager Paul Rivera], Bobbito, some others—came up playing in that gym. It was the home of some great leagues and great players many years ago. But like many things in New York City, it fell by the wayside and ended up closing.

WP: We could’ve built something from scratch, anywhere, but we felt using this space made it more real.

SLAM: Tell me about who is getting to use Masaryk now?

WP: It’s really a great cross section of people from the New York basketball community. Media, people from NRF [Nike Recess Federation], we’ve had high school teams in there, youth league teams. It really is a place where anyone from novice to elite can come and get better.

DB: We actually opened the gym with a clinic where we had Amar’e [Stoudemire] come down and we had 200 local kids take part in it. Plus, part of the membership includes local youth coaches, organizers, etc, many people from the community. And since they can each bring up to 19 people—or kids, if they want—with them, a lot of people are being exposed to the space.

SLAM: Who owns the gym, and how long is it in your control?

DB: The gym is owned by Masaryk Towers, but we’re in control of it through April.

SLAM: And then what happens?

WP: It goes back to them. But we’ll stay involved with programming things there and help them out. We’re not just coming in and out real quick.

SLAM: Nice. So Masaryk Towers will definitely have the nicest community gym in the city for a long time. I also noticed some cool banners in the gym. One each for the following New York City-based tournaments: IS8, Rose Classic, Tournament of Champions, Pro City, Dyckman, W. 4th, Hoops in the Sun. They have an old-school feel and totally add to the look of the gym, but I also take it you are active sponsors of all of those tournaments now?

KP: Yes, all of them. Those banners also serve as inspiration for everyone who comes to play or work out in the gym. They’re putting in the work now so that they can be ready for summer ball.

SLAM: Who are some of the elite players that have been to the gym already?

DB: All of the Team Nike guys are members. So as they come into town they are going to come through.

SLAM: Where does the motivation for such a great venue come from? Nike is already the dominant basketball brand, so it’s not like you need to do stuff like this.

DB: I think the reality is that anytime you grow the game, that helps us. Take people like you, who live and breathe basketball. We can give you a whole new basketball experience you’ve never had. And then there’s all the people that love the game but don’t get to work in it like you do. They will get so much out of this.

KP: We’re also very proud of our work on the service side of things. All you need to do play is book your time and show up with some Nike kicks. Everything you need is in your locker.

DB: No matter who you are, you can get better. We offer elite training to every level of player. Whether you’re looking to dominate your Saturday morning run, or dominate Dyckman, this is where you should come to do it.