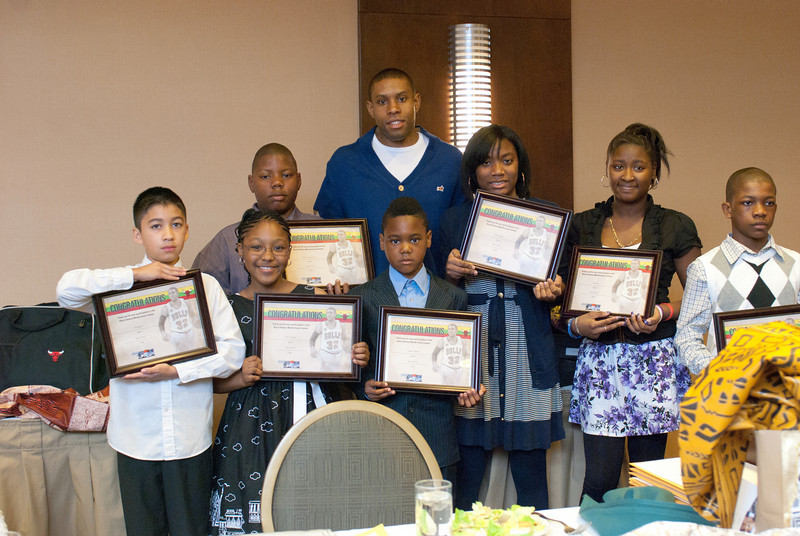 While most of his teammates were sleeping in last Saturday as they prepared to play the Utah Jazz on the second night of a back-to-back, Chicago Bulls guard CJ Watson was busy hosting an appreciation luncheon for the essay award-winning children of his Quiet Storm Foundation’s Annual Black History Essay Contest at the Crown Plaza.

Students from Robeson High School, Nicholson Tech Academy, Sumner Elementary Math & Science Community Academy in Chicago and students that were flown in from Kermit R, Booker Elementary, Wendell P. Williams Elementary and West Prep Institute in Las Vegas were treated to lunch and a ceremony that not only recognized their winning essays but encouraged them to continue their efforts in education and pursuit of becoming future leaders.

The hall in which the ceremony was held was filled with pictures of numerous black luminaries such as Dr. Martin Luther King Jr., Malcolm X, Rev. Jesse Jackson and President Barack Obama.

It was a very intimate affair as the principals and teachers from some of the selected schools joined the families of the winning children in honoring their essays. The Foundation board members are composed of Watson’s family and close friends, so the feeling was more of a get-together than a collection of individuals.

Councilman Ricki Barlow of Las Vegas, Nevada, along with Watson, presented students with awards and each student had the chance to recite their essay.

Talking with numerous family of the children as well as the school faculty members present, all were not only impressed by the event, but by the passion of the foundation members, particularly President Watson who stayed and talked with guest as well as signed autographs and took pictures.

“Role models who really come out and show their face and it’s not necessarily about money all the time,” said W. Delores Robinson, principal of Sumner. “That’s the motivation and care that our students need, because there is so little of that. There are some things in life that are of great value that money can’t buy.

“Money has its place but what you can’t see is the intangibles,” continued Robinson. “It takes caring, passion and love. You have to love them and the kids must know that. To me, you can’t buy that with money. Reaching out and spending time, that’s why I feel so strongly about the foundation because it doesn’t have to be throwing a child a lot of money. We do need money for certain things but more importantly, we need to give of ourselves and give our time. We need to sacrifice, make the sacrifice of time and love. You can’t put a dollar value on that.”

To finish off the weekend, the students and families were treated to a tour of the United Center and got to not only enjoy a 118-110 Bulls victory over the Jazz, but were present to see the 1990-91 Bulls honored at halftime.

Watson contributed 16 points, 8 assists and 5 rebounds to the victory and afterwards talked about a busy and emotional day.

Obviously a busy day for you, how did it feel to end it on a high note?

I felt good. I was a little tired out there, just from a long day with everything I did with the foundation but it’s good to go out there and get a win and play great.

You talked about some the core values of the foundation which have a lot to do with your upbringing, but what would you consider being the central focus?

Education is the big goal, especially with my parents teaching me the importance of education. Making me stay after school and making sure I finished my homework before I went out and played. Education was one of the big things and just trying to give back to the kids by giving them hope.

I noticed a lot of your close family is not only involved with the foundation but they are very committed and driven to see it succeed. How does that make you feel being the President, knowing that your family is so focused towards the goals of the foundation?

My family is one of the reasons it got started. They continue to help out, especially because the foundation doesn’t have that much money. It’s a lot of community work with the foundation, like family friends and other support. Family plays a big part in it.

You seemed very impressed with the children who received awards, especially with the delivery of some of their essays?

It was amazing just to see the kids write about the things that they did, especially the little girl [Kiarah C. Stevenson of Booker, who delivered a very touching speech about the importance of black history and the research of the disease that has helped make sure some of her family members are still alive]. She had diabetes and I didn’t know that until I listened to her essay so [all the children] put their subjects into real-life perspectives, which was great.