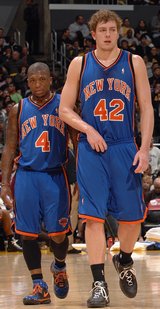 The New York Knicks didn’t acquire any new big-time free agents this summer, but it’s not all for naught: They at least kept both of their own top restricted free agents. Nothing has been officially put to paper yet, but according to David Lee’s agent, the deal is as good as done.

Lee’s diminutive buddy on the court, Nate Robinson, is also just about ready to sign his name on the dotted line.

“We’re on the verge of getting this done,” agent Mark Bartelstein said. “I believe David will sign the contract tomorrow.” The contract is believed to be worth in the $8 million range for the 2009-10 season.

Fellow restricted free agent Nate Robinson has also reached terms with the Knicks on a one-year deal, according to a source with knowledge of the talks, that will pay him a higher salary than his $2.9 million qualifying offer.

By signing one-year contracts, David and Nate will of course be back at the negotiating table next summer as unrestricted free agents, joining a bunch of players that you’ve never heard of.

Lee’s deal is reportedly for $7 million, with a $1 million bonus if the Knicks make the Playoffs next season.

In other words, David Lee’s deal is worth exactly $7 million.