Dwyane Wade Promises to Be More Aggressive in Game 2 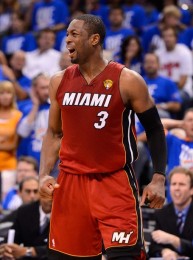 The Miami Heat desperately need a win tonight, as they look to avoid falling down a 0-2 hole to the OKC Thunder in the NBA Finals. The Heat will need Dwyane Wade to transform himself back into the old Dwyane Wade.

LeBron James has publicly laid out the challenge for his teammate, and though he acknowledges that he’s not the same explosive monster that he once was, DWade knows what his team needs, and promises to be in attack mode tonight.

From the Miami Herald:

So, what’s the plan? “I’ll be more aggressive,” Wade said. […] After Game 1, Erik Spoelstra immediately turned his focus to Game 2, saying his team would make the proper adjustments needed to even the series. Finding a way to get Wade involved more offensively is No. 1 on Spoelstra’s list of things to do differently. “We’ll get him opportunities to attack, and I think he had a couple good opportunities to get into the paint there in the fourth quarter — a couple of them he wasn’t able to convert,” Spoelstra said. “But he was aggressive during the quarter, and so we’ll try to get him in places where he can continue to be aggressive.”

You might recall that Dwyane Wade came under intense criticism following Game 3 of the series against the Indiana Pacers. He was able to bounce back after getting his knee drained, and finished strong.

The Miami Heat don’t need Dwyane Wade to turn back into the 2006 version of himself – that guy is long gone – but they do need him to break out of the funk he’s in, and to return to his normal aggressive self in Game 2 tonight, and going forward.