Eddy Curry’s Side of the Story 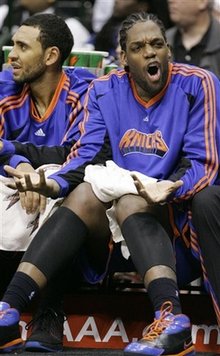 So, big win for the Knicks last night. Let’s get into why they defeated the Hornets. What, is there something else going on with that franchise? Oh right … THAT!

Here’s Eddy Curry’s response to the charges against him that he tried to solicit gay sex from his former driver. Via Newsday:

“This is absolutely false,” Curry said. “It’s incredible. I can’t even believe it.”

“He had approached my friends and me a while back trying to get money and stuff like that,” Curry said. “I just never thought — especially with the past that me and him had — I never thought that it would go past where it did, which is idle threats; ‘I want some money or else’ kind of stuff. I guess it’s just like a prime example of you just got to watch who you have around you. This is a guy who I really thought was my friend up until the last four or five months. I can’t even believe this has happened.”

For what it’s worth, here’s teammate Malik Rose take on things: “I know for a fact Eddy’s not gay.”

And because Eddy clearly didn’t have enough to deal with in his life at this point, his coach diplomatically stated that the big fella needs to lose some weight if he plans on seeing the court. Somehow, I don’t think that’s his biggest concern this morning.