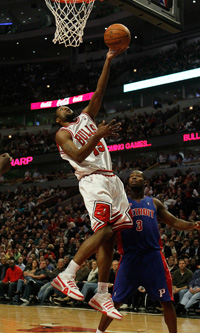 For the Bulls, this was a much needed home game. Having been on the road for their annual “circus trip” for the past three weeks, and losers of five straight, being back at the Madhouse on Madison was a definite sign of relief for the them. And it showed as they cruised to a victory in their homecoming. Of course, there was a bigger story, as the game was also homecoming for Ben Gordon, who returned to the place he spent the spent the first five years of his career. It was his first time back at the UC since jumping ship this past summer. Unfortunately for him, his return wasn’t as sweet as the Bulls’.

The 1st quarter was about as dry as it gets. Just a dead arena; nothing but the sound of conversations. While the Bulls were solid, the Pistons shot a disgusting 5-20, missing their first six shots, and getting to the line just one time — and that was for a defensive three second call. To put it in greater perspective: Ben Wallace had three shot attempts in the quarter. He had four in the whole in game. The fact that he was looking to score should tell you something. One might expect a head coach to get upset about all this, but Pistons coach John Kuester was about as inert as the crowd. He stood up maybe three times.

Ben Gordon, who’s missed the past two games with a bum ankle, came off the bench. He entered the game at the 6:24 mark to a sea of boos that persisted for the entire evening.

“I have already moved forward. This was just another game for me. It wasn’t really that big of a deal. I moved on a long time ago,” said Gordon. “I have no bitter feelings toward the Bulls…it’s just part of business.” He was just 1-3 in the quarter, and saddled with foul trouble for much of the first half.

“It was kinda weird, a little bit,” said Joakim Noah. “I thought he would get a little bit more love than that, but it is what it is…he brought a lot of happiness in this building, but fans will be fans.” He continued his praise of BG, saying, “He’s the hardest worker I’ve ever seen in the NBA, period…in the summertime he would be in the Berto Center, for hours at a time, three times a day. I’ve never see

n anybody with a work ethic like that, so I appreciate everything he did.”

John Salmons said he was surprised: “It’s better to play with him than against him, I’ll tell you that.”

Salmons put together his second consecutive solid game, leading the Bulls with 7 in the 1st quarter en route to one of his better games this season. He finished with 22 on 7-12 shooting to lead the Bulls.

The game picked up a bit in the 2nd quarter. Both teams were hot; as the Bulls shot 60 percent. The Pistons 53. Detroit also got to the line 11 times, knocking down 8. The Bulls offense looked great, filled with both player and ball movement. Brad Miller led the way, getting 8 of his 16 in the period. The Bulls flowing offense featured an array of ball screens, back screens, and flex cuts, and led to 9 assists.

The 3rd quarter was more of the same. But the Bulls drew their similarities from the 2nd quarter, shooting 63 percent, while the Pistons took after the 1st, shooting a woeful 35 percent. Ironically, it was the Pistons who came out fired up, starting the quarter on a 10-3 run. But after a timeout at the 9:24 mark, the Bulls flipped the switch. The “fan-o-meter” — or whatever it’s called — actually did its job. The crowd was amped up coming out of the timeout, and it got the team going. They forced an immediate turnover, which led to a fast break layup, and kept the defense, energy, and pressure up for the entire quarter.

Things got sloppy in the 4th. “I thought we had a good control of the game in the 3rd quarter. But in the 4th quarter we kind of got a little hesitant, too many turnover. Just a little careless with the basketball, and that let’s teams get back in it,” said Bulls Head Coach Vinny Del Negro. But even as the Pistons came within single-digits, there was never the feeling that the Pistons actually had a chance.

Gordon tried to provide some of his good ol’ late-game heroics, netting 9

“Ben’s a scorer, you know. When Ben has the ball, every time he shoots you think it’s gonna go in,” said Del Negro. “There’s no question he was hobbling a little bit with the ankle. You could see that.”

Gordon was slowed by his ankle injury, but Derrick Rose seemed to be fully recovered from his. Rose looked awesome, flying up-and-down the court with the ball, and catching two alley-oops courtesy of Brad Miller. He finished with 19 on an ultra-efficient 6-9 from the field, and 7-9 from the stripe. He also had 6 assists and 4 boards.

“I like when he’s attacking like that,” said Del Negro. “I thought he started the game off more aggressive, coming off the high screen-and-roll, hitting some shots, and making plays, so all that’s a good sign…[he’s] feeling a little bit better with his ankle. A little bit more confidence.”

With 10 more home games this month, the Bulls will look to keep the Ws coming. But they can’t overlook their 2-8 road struggles either, and that starts with King James on Friday. The Bulls topped Cleveland 86-85 a few weeks ago, but, “they’ll be waiting for us,” said Del Negro. “We have to play much better in terms of our turnovers and some of the execution part of it to give ourselves an opportunity.”