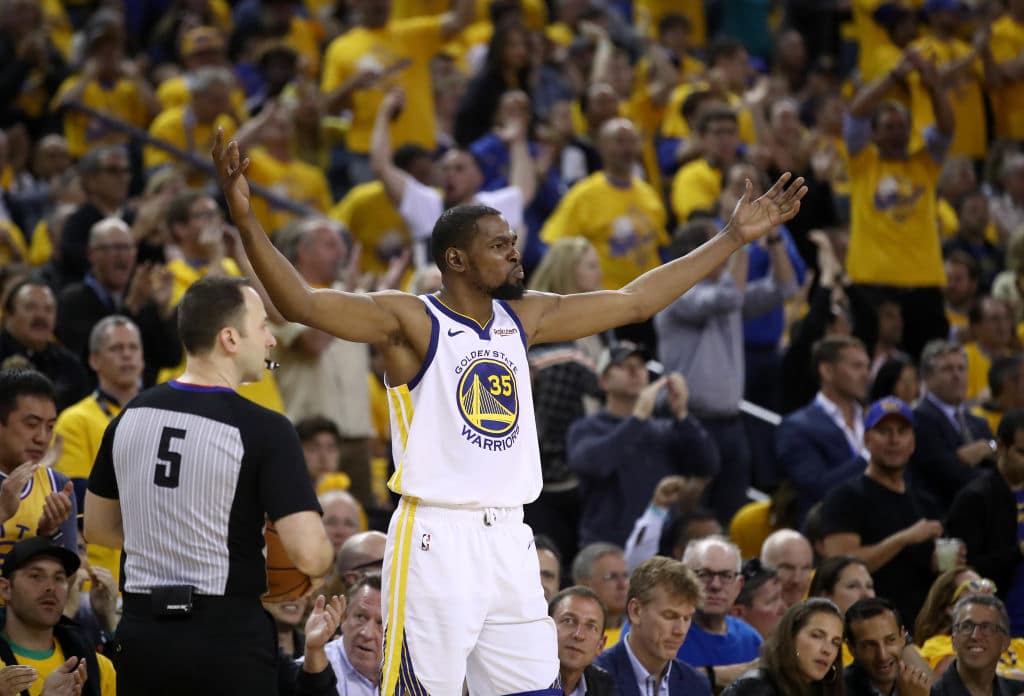 Kevin Durant has been listed as questionable for Game 5 of the NBA Finals, media at the Warriors’ Sunday afternoon practice report.

The change in status comes after the forward was able to be a bit more ambitious with his rehabilitation. On Sunday, Durant worked with some of the Warriors’ young players to test how his calf would hold up.

Following the session, Durant left the arena with ice on his calf but no visible limp.

Durant’s status has been up in the air for the better part of the past few weeks, a frustrating ordeal that resulted in Steve Kerr opting out of giving additional updates to the media due to the complex nature of Durant’s recovery.

We wrote about a report that angst was mounting in the Warriors’ locker room earlier today.

While Durant’s upgrade from out to questionable is a positive sign for a Warriors team desperate for support after falling down 1-3 to the Raptors, there’s no guarantee that the forward will see the court.

In Game 3 of this series, Klay Thompson, nursing a hamstring injury, was dressed and available for the Warriors but never ended up seeing the floor.

Previously this series, Kerr and the Warriors have ruled Durant out the day before each game. That they haven’t dismissed the idea of Durant suiting up in the Monday night tilt in Toronto is a step in the right direction.

Expect the team to monitor Durant’s status closely, particularly how he feels after increasing his workload in today’s practice. Throughout Durant’s recovery from this calf injury Kerr has made it clear that the superstar forward would have to go through a full practice before returning to action.

Today’s custom session with young players may not constitute a full practice per se – Mark Medina of The Mercury News referred to Durant having gone through shooting drills – but circumstances have changed considerably since Kerr made those comments after Game 1.