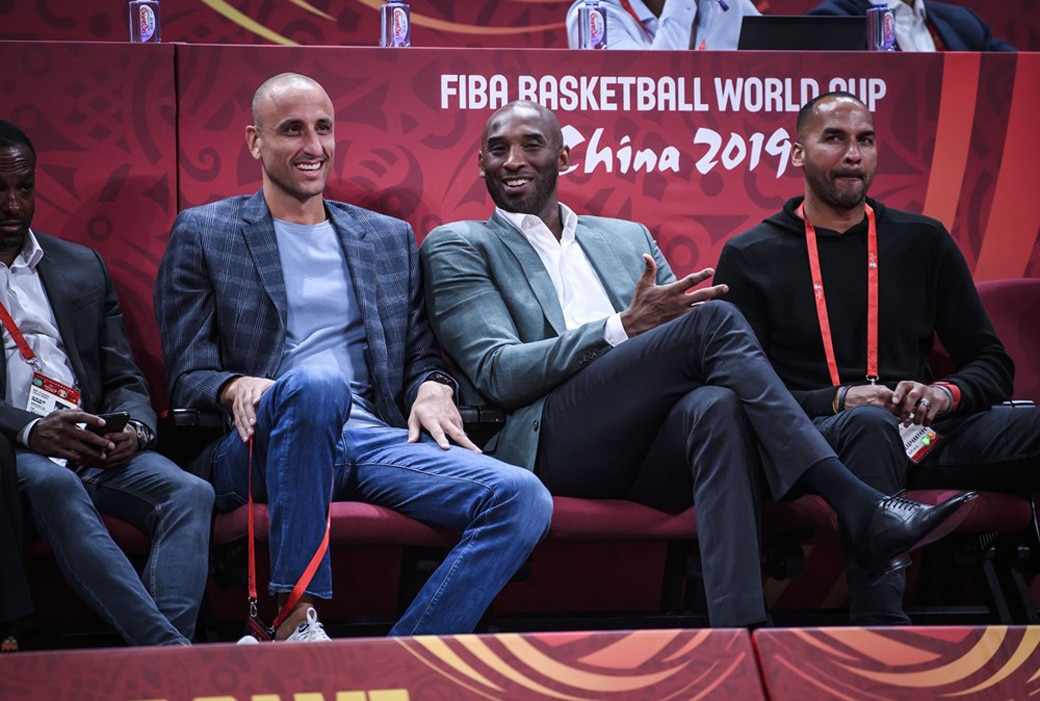 Walk around Wukesong Stadium in Beijing, China and you’re bound to see several purple and gold Kobe Bryant jerseys. When he was briefly shown on the jumbotron during the semifinals of the 2019 FIBA World Cup, fans gave perhaps their loudest ovation of the evening. Bryant couldn’t even get up from his courtside seat next to Manu Ginóbili without the crowd erupting.

He’s a major reason why.

Bryant grew up and developed his skills in Italy—his father, Joe, played pro there—before moving permanently to the United States at the age of 13. His eventual success in the NBA inspired countless others to pursue basketball, from Los Angeles all the way to Beijing. Since retiring in 2016, Kobe has continued his efforts to spread the sport globally, taking on the role of ambassador for the World Cup.

Having competed with and against so many international players, Kobe knew it wouldn’t be an easy road for USA this year. Back in March, prior to rosters being finalized, he spoke to SLAM and a few other reporters about the tournament and cautioned that they were not a lock to win gold.

“We made the assumption in ’06 [when USA won the bronze at the FIBA championship] and prior to that, that some of these players aren’t in the NBA, so they must not be very good,” he said. “When I came in ’08, it was like, Listen, that’s not it. There are plenty of players that are insanely good that choose not to come play in the NBA, so let’s understand that.“

The 2019 silver medal went to Argentina, a team with no current NBA guys on its roster. Spain, led by Ricky Rubio and Marc Gasol, claimed gold.

“Put the best players that you think are going to make the best U.S. team out on the floor, we are still going to have challenges,” Bryant added during a recent press conference, alluding to the fact that many superstars from the US declined the opportunity to participate this summer.

“It’s not going to be a cakewalk. The days of the ’92 Barcelona Dream Team are gone.”

We sat down with Kobe while he was out in China to further discuss the expansion of basketball, memories from Italy and more.

SLAM: Describe your role as global ambassador and why you wanted to be involved in the World Cup.

KB: Well, growing up overseas, I’m basically an international kid. I learned how to play the game on an international level before I got back to the States. When I was growing up over here, the game wasn’t as global as it is now, so I had to get up and record games super, super early and listen to [Italian coach] Dan Peterson break down the game and all sorts of stuff. Now, the game is truly global. So it’s an honor for me to come back at this stage in my career and help expand the game even further.

SLAM: What are your early memories of playing basketball in Italy and how did that upbringing influence your game?

KB: Some of my early memories are playing Minibasket. I think that really helped mold me because we played on smaller courts and smaller rims at a really early age and that taught us how to shoot the ball correctly and how to be fundamentally sound. Every week in practice, we wouldn’t scrimmage ever. It was all fundamentals. Passing, screening, moving off the ball, shooting. All the basics. And if we did scrimmage, we’d scrimmage full court no dribbles allowed. So that set the foundation for me for how I came to understand the game and how I now teach the game.

SLAM: What’s your style of coaching and who are the people you drew from? [Kobe coaches his daughter Gigi’s AAU team]

KB: I draw a lot from Phil [Jackson]. Phil’s coaching philosophies and my coaching philosophies were put into the Wizenard series. If you want to learn a lot about how Phil used to do things and how I do things now, I put a lot of that into the Wizenard book. It’s one where you don’t give directions so much as ask questions. You want to get players thinking on their own and figuring things out on their own. We don’t have sets. We don’t have plays. We have ideas. Within those ideas, the players are responsible themselves for figuring out what is the best idea to use at what time and why. When you have players that can think, particularly at a really early age, and you start teaching them that at 11, 12 years old, then when they get to 17, 18 years old—how are they going to be processing the game then? It’s really fun to watch them work through those ideas.

SLAM: Can you talk about your performance in the 2008 gold medal game against Spain? [Kobe scored 13 points in the fourth quarter to help USA defeat Spain in the ’08 Olympics]

KB: It was a great game. There was a lot of hype around the game. Spain was one of those teams that we couldn’t really blow out because they were too fundamentally sound. They understood how to use the clock and minimize possessions. So as a result, they were always in striking distance. I just had to bide my time because I knew they were going to be there in the fourth quarter. Just kind of laid in the weeds a little bit and then in the fourth quarter, tried to create some separation at the right time where I felt like they couldn’t get it back. And that’s how I paced that game out.

SLAM: Whether it was in international competitions or the NBA, who were the toughest guys you faced head-to-head during your career?

SLAM: You’ve obviously witnessed the game change quite a bit through the years, especially moving out to the three-point line. What do you see as the next evolution of basketball?

KB: I think it just goes the opposite [way]. It goes back to midrange. I’m just kind of sitting here waiting for all these statistical people to figure out how to make midrange sound appealing after all these years of making it sound not appealing. Because it’s coming.

SLAM: What’s the best advice you can give to young players coming up in the League?

Photos via FIBA and Getty.