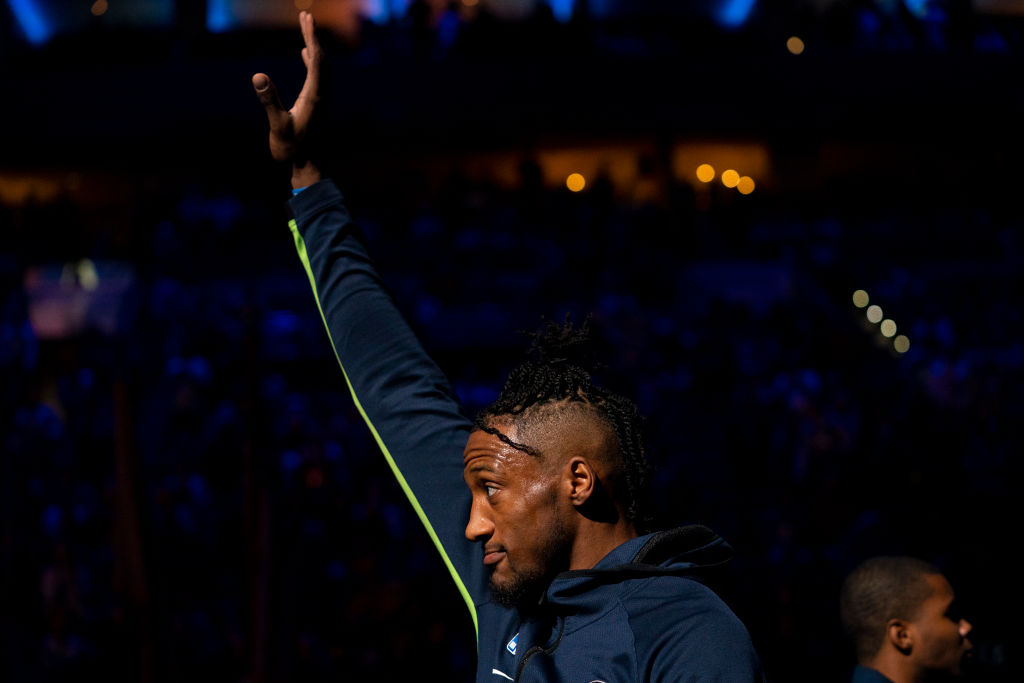 Update #2. 1:09 AM: The deal has been agreed upon and it includes 12 players and multiple first-round picks. We’ve broken which players are going where and why right here.

Update #1, 12:25 AM: The four-team trade between the Hawks, Rockets, Timberwolves and Nuggets has been agreed upon, Adrian Wojnarowski of ESPN reports.

The Timberwolves will now acquire Malik Beasley, Juan Hernangomez and the top-14 protected Brooklyn 1st-rounder that Atlanta was in possession of. The Nuggets acquire Gerald Green, Keita Bates-Diop and Houston’s 2020 1st.

The Golden State Warriors have moved on from trade discussion regarding D’Angelo Russell with the Minnesota Timberwolves, Shams Charania of The Athletic reports, but that won’t necessarily derail the first component of a potential multi-team trade in the works.

Earlier today we wrote about how the Hawks, Rockets and Timberwolves were in discussions to send Clint Capela from Houston to Atlanta, Robert Covington from Minnesota to Houston and an expiring contract from Atlanta to Minnesota.

In his latest tweet, Charania reports that Evan Turner is a name in play for the Wolves. Turner has an $18.6M expiring contract. Naturally, as The Ringer’s Kevin O’Connor and ESPN’s Adrian Wojnarowski reported on prior, there would likely be draft assets headed to Minnesota.

That three-team deal was the first step of what was being floated as a potential two-step, four-team scenario. That would give Atlanta the additional frontcourt depth they seek while giving Houston reinforcements on the perimeter. The deal was also framed as a way for Minnesota to acquire assets that could be then flipped to Golden State in exchange for Russell.

The sense now, per Charania and Wojnarowski, is that the gulf between the Warriors and Wolves is too significant. It’s important to remember that there isn’t a ton of urgency for Golden State to part with their summer sign-and-trade acquisition if they’re not pleased with the return. After all, the Warriors still haven’t gotten an extended look at Russell in a backcourt together with a healthy Stephen Curry.

The Wolves, to their credit, seem intent on attempting to accrue enough assets to offer a compelling enough package, one that could potentially include multiple draft assets like their own first-round pick and at least one other that they would acquire in the three-team swap (likely Brooklyn’s top-14 protected pick that the Hawks possess).

Such a deal would also need to include enough outgoing salary to fit with what the Wolves would be onboarding in Russell’s $27.3M pact. That could be Andrew Wiggins and his $27.5M but he’ll be on the team payroll through 2022-23 which diminishes the appeal.

A package built around draft assets and Wiggins doesn’t offer Golden State any short-term cap relief like one built around expiring contracts would.

All told, this hasn’t been enough to convince Golden State to pull the trigger thus far and that may not change before the deadline.

Interestingly, Minnesota’s inability to parlay their haul into Russell may not lead them out of the trade entirely. Now Wojnarowski adds that another fourth team could emerge, potentially the Denver Nuggets.

It’s unclear what the Wolves would seek from the Nuggets, or how else Denver might be looped into the deal but SLAM’s Chris Crouse reported earlier today that Minnesota has shown interest in both Malik Beasley and Gary Harris.

We’ve heard previously that the Wolves seek a pair of first-round picks for Covington. They could be getting one from Atlanta but Denver doesn’t have a 2020 pick of their own to extend.

Consider Minnesota and Denver’s involvement the bottleneck as we inch closer to the Thursday trade deadline.