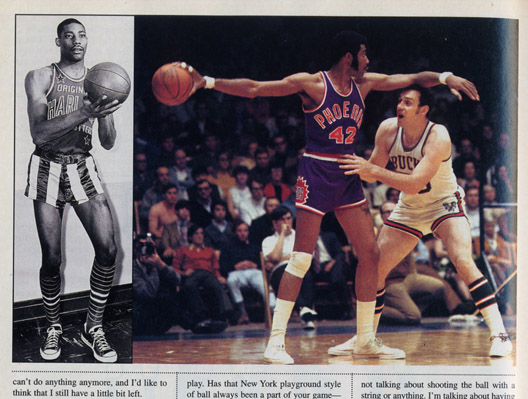 The journey that Connie Hawkins took to get to the NBA was inspiring to say the least. Foul, an autobiography by David Wolf, told the tale of Hawkins darker days–his ban from the NBA and his struggle for the right to show his skills to the world. Hawkins was a pioneer for the game of basketball as we know it today. The forward was a high-flyer who could do a little bit of everything and got his flavor from the streets of New York. In SLAM 12‘s Old School, Hawkins sat down with Scoop Jackson to discuss his career and his story.–Ed.

History never repeats itself. Never. The truth always hurts. Always. To be blunt—not Phillie but brutally—none of us know. Somehow history got by us all. Fooled us. Made us believe the hype that only a chosen few ruled, dominated, changed the way the game was played. Too much video games, Inside Stuff. Not enough substance, never enough truth.

The history of basketball tells us to love, respect and honor the past. Wilt, Cap, Doc, Cousy and Russell. West and Robertson. The legacy packaged so nicely. So neatly. We simply accept it. Never sweating the deeper essence of hoopology that established Marvin Barnes, Billy Ray Bates and Gus Williams as prodigies of the game, true pioneers.

Unseen in this game was a young brotha of evolution. An NYC schoolyard legend who, after Elgin Baylor, turned basketball into art. From the fences to the fiberglass, he un-televised the revolution by making basketball as important to black socialism as Huey P. Newton.

Cornelius “Connie” Hawkins was a one-man revolution. He changed the game of basketball by doin’ it, doin’ it and doin’ it well. On the dl. He played the game so well that without him, Jordan, Iceman, and Dr. J would have never known who to pattern their skills after. But we never hear this.

In the midst of becoming a legend, Hawk had his story told in Foul, a book that became standard reading in inner city classrooms in the ‘70s. His life transcended the world of basketball by bringing NYC basketball and “negro” childhood out of the pj’s and into the country clubs. His life, his game. This is what history is all about.

From Brooklyn’s Boys & Girls HS to Iowa University to Pittsburgh to Minneapolis to Phoenix to Los Angeles and finally, to Atlanta. His career was marked—but never defined—by the gambling scandals at Iowa, which caused him to leave after one season. It took him years to finally make the NBA, but when he did, people knew the stories about Hawk from Brooklyn were true.

Anonymity. Pain. Honesty. The Truth. It never hurts the ones who made it, only the ones that want to hear it.

Chillin’ in Phoenix, workin’ for the Suns, the Hawk still loves to get down and tell his story. With the coolness of Clyde Frazier and the honesty of Charles Barkley, Hawk reminds us: 1) Elgin was “The Man” before Doc. 2) He, not George Gervin, invented the finger roll. And 3) Don’t ever call him old-school.

SLAM: Who got you started?

HAWK: I was so young when I started. But I’ll have to say that going down to Madison Square Garden, I used to watch Elgin Baylor. I watched him play, and I think he was the first guy I’d ever seen who had that certain flair for the game. I adapted my game after his. See, once you learn to play in the schoolyard, you can almost adapt your game to anything. So naturally, with Elgin having that type of skills, I adapted my game to what he was doing on the court.

SLAM: From the old school, uh?

HAWK: We don’t like old school. Don’t call me old school [laughs]. We like the term “legends.” “Old” makes me feel like I can’t do anything anymore, and I’d like to think that I still have a bit left.

SLAM: A Hall-of-Famer can say that. I’m with you. Respect due. But you originated your “legendary” game on the streets in the playgrounds in New York…