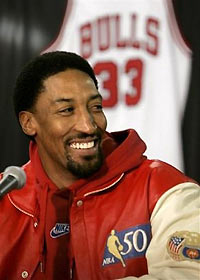 As far as legacies go, Scottie Pippen’s is in an elite class. A member of all six Chicago Bulls championship squads, he was inducted into the Hall of Fame in August 2010, and plans are underway for a statue of Pip to be built outside of the United Center. Aside from working for the Bulls as an ambassador, he’s also been promoting Isotonix, a formula that provides relief from temporary inflammation associated with the normal aging process and daily activity. SLAM caught up with the former small forward to talk hoops, what he’s been up to, how he got involved with Isotonix, and why the ’95-96 team’s regular season win record won’t be broken any time soon.

SLAM: So I know you’ve been busy working with the Bulls—tell me about what you’ve been doing for them.

Scottie Pippen: Basically just being the face here with the organization, working as an ambassador, doing stuff with marketing, public relations, community service, things of that nature.

SLAM: They’re building a statue of you outside the United Center. How’d you react when you heard that was happening?

SP: I was pretty excited. The president [of the organization] told me, and I was excited. That was something that kind of caught me off guard, something I wasn’t expecting.

SLAM: This season you’ve literally had a front-row seat in watching Derrick Rose develop into a full-fledged superstar. Did you expect this would happen?

SP: Well I think we all expected it, I don’t think it’s coming as a shock. Anytime you draft a player No. 1 you’re hoping that you’re getting the best talent out there, and Derrick has lived up to be that and far beyond.

SLAM: The Lakers were having some struggles for a while, and rumors started to circulate about them making a move. Do you think that’s something they should try to do?

SP: I think it’s a matter of them trying to sort it out. I think they’ve got all the right pieces there—they are the defending champs and they made some moves to improve their team—but some other teams out there have gotten better as well. It’s something that I can’t really elaborate on, because [I am] on the outside looking in.

SLAM: Who do you think was a tougher group for Phil Jackson to handle—you guys are these Lakers?

SP: Well, we were easy, I can say that. Even with Dennis [Rodman].

SLAM: You think it’s a lot more difficult for him to deal with his current group?

SP: Well I’m sure it’s a little different for him. Phil’s not getting any younger; it’s been 20 years, or closing in on 15, 20 years. He’s not a young man now, and he probably can’t tolerate the same thing [nowadays].

SLAM: You came out on the winning end of that “Will the Heat win 72 games?” discussion. How’d you know it’d be so tough for them to win so many games?

SP: I just felt it was an insult to every team that’s played in this League to think that one team can be put together, and now all of a sudden we got—excuse my word—a jackass like Jeff Van Gundy saying they can win 72 games and break the Bulls’ record. Who is he? So that was just something that he totally took out of proportion, to some degree—with respect to those two players, or I would say two and a half players, since I don’t think Chris Bosh is half the player of LeBron James. But there’s no way those guys are gonna break any type of record. I don’t think they can break the franchise record in Miami, or the state of Florida, I should say.

SLAM: Do you think they could next year or the following year, after they learn to play together and fill out the roster with some new players?

SP: There’s a lot of other teams out there right now that look a lot better than the Miami Heat, and I would much rather be elaborating on them breaking the record than Miami, because they’re nowhere near it. They haven’t even won the most games in the state of Florida, as I said. That record is far out of their reach—they need to break the Miami Heat franchise win record, than we can start to, at least, sit down and talk.

SLAM: I think a majority of the current generation of players probably grew up watching you guys. Do you ever see any of your game in the new crop?

SP: I know that with each generation, [like when] I came into the League, there was a generation of players that I watched that I was inspired to [replicate] their style, and sort of raise it to another level, I guess I’m saying. These guys are the same way. I would say that LeBron was probably more of a guy that I would’ve wanted to be like if I was watching the game today, and probably vice versa. I was probably the player that he mostly patterned his game after—he’s more of an all-around player, and, again, he’s magnified it to another level.

You can’t really play the way someone played, you have to try to be better. There’s no player that I could say that I watched in the past, one player, that I wanted to have my game like. I liked Dr. J, but I wanted to better than Dr. J. If you look at Dr. J’s game against today’s players, well, Dr. J wasn’t half as exciting to watch as players in today’s game. They can dribble better, they can shoot better, they’re faster, they’re stronger, they’ve got a better looking body, they’ve got bigger shoe contracts. When I was watching Dr. J, the game was very small. You only had maybe two, three times a year that you had people watching Dr. J, unless it was in the Playoffs. So it’s hard to want to imitate players from back then. You want to be like two or three players, and you want to better than them. I would want to be like Larry and Magic, not just like Magic, because Magic wasn’t a great shooter. And neither one of them could play defense. So I wanted to be like a Darrell Walker, or an Alvin Robertson, or a Derek Harper. I wanted to be a guy who could defend a guy, all up and down the court. There’s a variety of players you want to be like, it’s not one player.

SLAM: Did you hear about Jerry Sloan’s resignation?

SP: I heard he was resigning. He must have been really pissed Carlos Boozer was able to come in there and win.

SLAM: What kind of memories do you have of playing against him?

SP: He’s a hard-nosed coach. I played for Coach Sloan during the Olympics, and I tell you, what a great guy. What a competitor. And you can just hear it in his voice that he has that competitive side, and he’s just a great coach. He’s very basic, and persistent, and consistent. He don’t change nothing, and he’s just gonna keep coming at you. You have to respect him for the great Utah Jazz teams that he’s brought through there that have always been one of the top teams in the League.

SLAM: Why’d you get involved with Isotonix?

SP: I got involved with the product because I’ve had a lot of surgeries and things, and I’ve really been trying to pamper all of my injuries from that, from scar tissue or operating pain that’s starting to generate from knee pain. I was introduced to some of the Isotonix products, and JR [Ridinger] and their doctors were able to put together a product that really can stimulate and regrow some of the cartilage into the joints, and basically relieve a lot of the pain.

SLAM: And since you’ve been using it, have you been feeling better?

SP: Yeah, it’s been great. I can’t say I haven’t have any problems, but I definitely have been feeling better than I had in the last year, and I’m definitely gonna continue to use it.