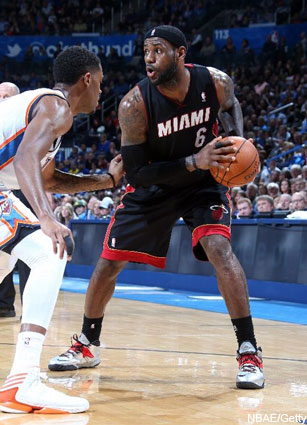 Denver pulled ahead early and never looked back, leading from the tip to the final buzzer in a win over Milwaukee. Kenneth Faried was hot for the second straight game, posting 26 points on 11-15 shooting, pulling down 6 rebounds as well. Wilson Chandler chipped in 15, hitting all three of his 3-pointers, and Randy Foye, starting at point guard, put up a double double with 12 points and 10 assists.

The Bucks were as hapless as usual, shooting a shade under 43 percent while allowing Denver to hit on 51 percent of their attempts. Caron Butler led six players in double figures with 17 points, while Giannis Antetokounmpo came off the bench to put up 12 points, 4 rebounds, 4 assists, 2 steals and 3 blocks. Milwaukee missed the chance to win consecutive games for the first time all season.

The Heat got revenge for a blowout loss to the Thunder on national TV a few weeks ago, going into Oklahoma City and owning the court in Russell Westbrook’s first game back from injury for OKC. LeBron James dominated the matchup, scoring 14 points and hitting 7-8 shots in the game’s first five minutes to set the tone. James finished with 33 points, 7 rebounds and 4 steals (along with 8 turnovers), hitting 15-22 from the field.

LeBron finished just as strongly as he started, flushing a dunk through contact over Serge Ibaka (14 points, 8 rebounds, 5-11 shooting), getting his nose bloodied and heading to the locker room for the remainder of the game in the process. Dwyane Wade had no problem picking up the slack, as the wily vet (he’s reached that stage) posted 24 points, 7 rebounds, 10 assists and 3 steals. Miami earned a split of the season series with the Thunder and moved within 1.5 games of Indiana for the top seed in the East.

The Thunder looked out of sorts welcoming Westbrook back into the lineup after a 27-game absence. They watched the Heat sprint to a 30-13 lead in the first quarter, and allowed similar runs to start the third and fourth quarters. Kevin Durant struggled early but battled his way to 28 points on 10-22 shooting while committing 5 TOs. Westbrook was noticeably rusty, scoring 16 points but shooting 4-12 from the field and often not knowing exactly where his teammates would be; he contributed to some sloppiness, with four of the Thunder’s 20 turnovers. No doubt that once he re-acclimates, the Thunder will go back to being extremely scary.

Golden State picked up a crucial win at home, ending Houston’s eight-game winning streak in a grinding defensive affair. Stephen Curry (25 points, 6 assists, 5-8 from 3-point range) lofted a lefty layup in high off the glass in the final seconds to force OT, then gave the Warriors the lead for good when he splashed in a 3-pointer to open the scoring in the extra period. David Lee came up big for the Dubs, going for 28 points (11-22 shooting) and 14 rebounds, his third straight 20-10 game.

James Harden carried the Rockets on a night when Dwight Howard and pretty much everyone else struggled offensively. Harden scored 39 points (14-27 shooting), getting 15 of them in the fourth quarter, 30 after halftime and hitting a mean step-back jumper to give Houston the lead at the end of regulation before Curry’s layup. Dwight dominated the glass, pulling down 21 rebounds, but struggled against the tough Warriors defense and scored 11 points on 4-13 shooting. The Rockets as a team struggled from all over outside of Harden, shooting just 36.6 percent despite the Beard’s stellar night. Chandler Parsons was just 8-24 for his 21 points, and Omer Asik  was the only Rocket outside of Harden to hit even half of his shots.

This was the type of game that Golden State will have to win consistently to make their move in the West. The Dubs shot under 40 percent on the night, but their hard-nosed defense combined with once again limiting their turnovers helped them gut it out. The Warriors had gone 5-5 in their previous 10 games at home, an very mediocre stretch for a team with an incredible home atmosphere.