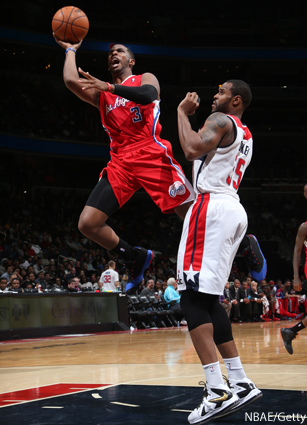 The Lakers picked up their first win since Kobe Bryant (21 points, 8 assists, 7 rebounds, 7 turnovers) came back from his injury. As odd as it sounds for Bryant to be the point guard, he is holding his own getting his teammates involved as he’s controlling the offense through his passing. But he has collected a lot of turnovers due to him being the only distributor, often forcing the issue at times. He did hit two free throws with 37 seconds to go that put his team up for good. Pau Gasol (15 points, 7 rebounds, 4 blocks) and Jordan Hill (15 points, 9 rebounds, 5-7 from the field) did their damage in the paint but Kemba Walker (24 points, 8 assists) had his way most of the night. The Lakers kept everyone not named Kemba Walker to 38.2 percent shooting and gave up a season-low 85 p0ints.

Chris Paul (38 points, 12 assists, 11-14 from the field) put on another MVP-type performance and became the 2nd player in the last 40 seasons with at least 38 points, 12 assists and 78.6 percent shooting from the field (Clyde Drexler—1990). Los Angeles led wire to wire, jumping out to a quick 25-15 lead in the first seven minutes. The Clippers shot 56.5 percent from the field as DeAndre Jordan (15 points, 10 rebounds, 2 blocks) made all six of his shot attempts. Struggling for the majority of this month, Jared Dudley (16 points, 7-10 from the field, 3 assists, 0 turnovers) had an efficient game and was on the receiving end of many of CP3’s assists. John Wall (24 points, 12 assists, 6 turnovers) has now had 12 consecutive games with at least 3 turnovers and is averaging 4.8 in his last 4 games. Other than Kevin Seraphin (16 points, 7-12 from the field, 20 minutes), the Wizards got very little production from their bench.

The Cavaliers couldn’t contain the Big 3 all night long, as James/Wade/Bosh combined to score 71 points, grab 27 rebounds and dish out 13 assists. Kyrie Irving (19 points, 3 assists, 4 steals, 3 turnovers) had his eighth game of the season with as many or more turnovers than assists while Dion Waiters (16 points) continued to play through the trade rumors. Mario Chalmers (11 points, 5 assists) and Ray Allen (12 points) combined to shoot 5-9 from deep as Chalmers hit two crucial 3-pointers in the fourth quarter. The Heat shot 7-8 on free throws in the final two minutes to close this one out. After losing to the Pacers 90-84 this last Tuesday, the Heat will get a chance at payback this upcoming Wednesday.

Even though New York gave up 106 points, they remained active on the defense side of the floor all night long, forcing 27 Hawks turnovers. Carmelo Anthony (35 points, 6 rebounds, 4 assists) has led the Knicks in scoring every game this season and Kyle Korver (13 points, 4-9 on 3-pointers) has now hit a 3-pointer in an NBA-record 93 straight games. Sparkplug Lou Williams (team-high 27 points, 6-13 on 3-pointers) by far had his best performance since coming back from his injury. Andrea Bargnani (23 points, 6 rebounds) played his role, Pablo Prigioni (11 points, 6 rebounds, 4 steals, 3-6 on 3-pointers) filled in well for Raymond Felton and Amar’e Stoudemire (9 points, 5 offensive rebounds, 19 minutes) is getting closer to looking much more tolerable when playing basketball. With 7:42 to go in the 4th quarter, the Hawks only trailed by 4 after Shelvin Mack (10 points, 5 rebounds, 4-5 from the field, 20 minutes) made a driving jump shot. However, the Knicks responded by going on a quick 11-0 run in just over a minute to take a 98-83 lead and put this game out of reach. The Knicks have won 4 of their past 7 games for the first time this season. Facing the Wizards (9-13), Bucks (5-19), Grizzlies (10-12) and Magic (7-16) the next four games, they will have a chance to gain some momentum before their nationally-televised game against the Thunder on Christmas.

Kyle Lowry (16 points, 6 assists) and Jonas Valanciunas (15 points, 11 rebounds) led a balanced attack as eight Raptors had 7 or more points. The Bulls haven’t won back-to-back games since November 18 and this is in large part due to their inability to put points on the board. With Derrick Rose sidelined and Nate Robinson in Denver, there aren’t that many creators on this roster. The Bulls shot 36 percent from the field and only mustered 11 points in the 4th quarter. Luol Deng (17 points, 7 rebounds, 4 assists) can only do so much, especially without Jimmy Butler (turf-toe injury) giving him breathers. In his second game since being signed by the Bulls, DJ Augustin (5 points, 6 assists, 1-7 from the field, 19 minutes) showed promise with his passing but still lacked any sort of offensive firepower—which is what this team desperately needs off the bench. Chicago has failed to reach 80 points in four of its last five games.

Having their best start through 24 games since 1990-91, the Blazers used a franchise-record 21 3-pointers, led by Damian Lillard (16 points, 6 assists, 4-6 on 3-pointers) and Dorell Wright (15 points, 5-5 on 3-pointers), to crush the spiraling Sixers. LaMarcus Aldridge (20 points, 16 rebounds, 5 assists, 10-15 from the field) had his 13th double-double of the year and looks like a clear-cut All-Star as long as his team continues winning at this pace. Losing a league-worst 6th straight game and still being unable to play defense, Philadelphia has concluded their cinderella run as their two best players—Evan Turner (3 points, 4 assists, 1-7 from the field) and Thaddeus Young (15 points, 5 rebounds, 7-9 from the field)—remain on the trading block. Tony Wroten (18 points, 7 assists, 6 rebounds) continued to make his case for Most Improved Player of the Year.

Leading by as many as 34 points in the second half, the Mavericks took down the growing John Henson (18 points, 13 rebounds) and his falling Bucks without Dirk Nowitzki and Rick Carlisle (illness). Jose Calderon (18 points, 7-10 from the field) made all 4 of his 3-pointers in the first quarter, helping Dallas score a first quarter season-high 38 points. Recovering from a shoulder injury, Brandan Wright (19 points, 6 rebounds, 9-10 from the field, 18 minutes) played his first game of the season and looked like the athletic, hyperactive force that looked very good late last season when the Mavs were at their best. Vince Carter (15 points, season-high 9 assists, 6 rebounds, 3 steals) had one of his most efficient games of the season and that is in large part because of Wright, with whom Carter has found a great rhythm with off the bench in the past. Big man Miroslav Raduljica (season-high 12 points, 6-8 from the field, 14 minutes) took advantage of the garbage-time minutes head coach Larry Drew gave him.

The Jazz never had a chance in this game as Tim Duncan (22 points, 12 rebounds, 3 assists) had his third straight double-double and Tony Parker (15 points, 7 assists, 5 rebounds) carved up Utah’s interior. The Spurs outrebounded the Jazz 55-42 and outscored them 50-36 in the paint. Enes Kanter (3 points, 1 rebounds, 1-6 from the field) and Derrick Favors (6 points, 7 rebounds) just haven’t had the season their franchise thought they’d have when Paul Millsap and Al Jefferson were let go. Trey Burke (20 points, 5 assists) reached the 20-point plateau for the third time since returning from his injury.