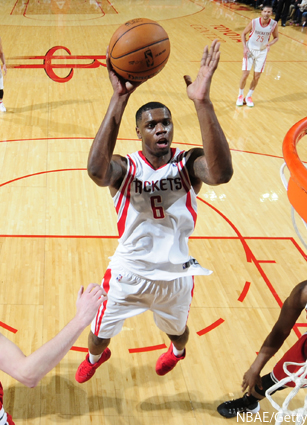 Paul George (36 points, 6 rebounds, 3 steals, 12-17 from the field) capped off a monstrous night with a statement dunk that rocked Bankers Life Fieldhouse. He requested to be in the dunk contest, three-point shootout and skills challenge over All-Star weekend and might just get his wish. Lance Stephenson (22 points, 12 rebounds, 7 assists) also might be making a case to attend All-Star weekend in the actual game if he keeps up his level of play. Winners of four games in a row, the Pacers were six points away from winning their fourth straight game by at least 20 points for the first time in franchise history. They beat Blake Griffin and the Clippers by means of a major defensive stance early on. DeAndre Jordan (12 points, 17 rebounds, 2 blocks) and Roy Hibbert (4 points, 11 rebounds, 5 blocks) each established their respective interior presence right away, collecting 2 blocks each within the first few minutes. After two Blake Griffin free throws, the Clippers held a 13-6 lead with 7:22 left in the 1st quarter. Over the next 14 minutes, Indiana only gave up 14 points as the team took a 45-27 lead midway through the 2nd quarter. David West (4 points, 15 minutes) was ejected right after halftime for a flagrant 2 foul on Griffin. The Clippers pulled within single-digits for the first time in the 2nd half after Jamal Crawford (22 points) made a jump shot early in the 4th quarter. However, the resilient Pacers responded with a 10-0 run and never looked back the rest of the way. The top-seeded team in the East held the Clippers to 39 percent shooting, outrebounded them (48-39) and outscored them in the paint (42-32).

Josh Smith (22 points, 8 rebounds) allowed Wizards fans to experience the bad J-Smoove and good J-Smoove all in one game. Smith shot 0-6 in the 1st half, only to go off for 20 points on 8-11 shooting in the 2nd half. This inconsistent play is reflective of the Pistons inconsistent season. Smith’s Pistons won these final 24 minutes, 58-44. Smith had plenty of help, though, as six Pistons scored in double-figures. Greg Monroe (12 points, 10 rebounds) and Andre Drummond (10 points, 13 rebounds) each had a double-double. Drummond has now had at least 12 rebounds in eight consecutive games, which is right around his average for the season (12.7 rpg). Sixth man Rodney Stuckey (20 points) continued to redefine himself as an effective bench player. After Drummond finished off an alley-oop to give his team a 93-90 lead with 4:38 to go, Stuckey made two free throws followed by a jump shot to give the Pistons the cushion they needed to close this one out. John Wall (34 points, 6 assists, 4 rebounds) carried his entire team almost all night, mostly getting help from only Nene (14 points, 4 rebounds) and Martell Webster (15 points, 3-5 on 3-pointers). Wall scored the final 10 points for Washington. As has often been the case this season, the Pistons earned many of their points down low, outscoring the Wizards 52-38 in the paint. The Wizards failed to move past .500 for the first time since the 2009-10 season, when they went 2-1.

It might not have been easy to do, but the Heat have now won 15 straight games against the Bobcats. LeBron James (34 points, 8 rebounds, 6 assists) led the way for Miami and scored as many points (6) as the entire Bobcats team in overtime. Neither team led by double-digits at any point even with Kemba Walker (6 points, 8 assists) leaving in the 3rd quarter due to an ankle injury. Walker currently holds the franchise’s second-longest streak of consecutive games played (190). Al Jefferson (22 points, 14 rebounds) carried the load once Walker left, making the game-tying shot to send this one into overtime. However, that shot came with 3:18 to go. Both teams really locked down in these final few minutes, before the Bobcats failed to finish off their fourth game in five nights. Charlotte simply ran out of gas. Chris Bosh (25 points, 7 rebounds) and Ray Allen (12 points, 9 rebounds) were the only other Heat players that scored in double-figures while the Bobcats passed the ball very well, having 31 assists compared to only 16 for the Heat. Bosh has now scored 25 points in three straight games for the first time since joining Miami. Josh McRoberts (10 points, 6 assists) and Anthony Tolliver (11 points, 3-6 on 3-pointers) had solid performances but both had costly turnovers in the extra five minutes of play. This was a dogfight between two teams that have the possibility of meeting in the first round of the Playoffs.

Philadelphia scored the first 4 points in this game and led 7-4 after Evan Turner (7 points, 3 assists, 3 rebounds) knocked down a free throw with 8:04 to go in the 1st quarter. Behind the shooting of James Anderson (11 points, 7 rebounds) and Michael Carter-Williams (10 points, 5 assists, 5 rebounds) early on, this young team kept it close midway through the 2nd quarter, only trailing 36-29. Then behind 8 points from Joakim Noah (21 points, 16 rebounds, 4 blocks), who had a monster performance, the Bulls went on a 13-0 run to take their first 20-digit lead of the game. Chicago put it in cruise control after that, eventually leading 78-42 after a Carlos Boozer (15 points, 13 rebounds) jump shot toward the end of the 3rd quarter. Thaddeus Young (12 points, 4 rebounds) led the Sixers in scoring, as his team shot 34-97 (35.1 percent) from the field and 2-19 (10.5 percent) from deep. D.J. Augustin (19 points, 8 assists, 4 rebounds, 3 steals) continued to look like a different player in red, averaging 16.2 ppg and 7.6 apg over the last five games—all games in which he came off the bench. He has been a major reason this team has stayed afloat in the East since Derrick Rose went down. The Bulls dominated every aspect of this game, having more rebounds, assists, steals, blocks and points. After winning four straight around the turn of the new year, the Sixers have now lost six of their last seven.

Dwight Howard (20 points, 14 rebounds) was in fact the big pickup for the Rockets this summer and has been a major reason they are currently one game out of the four seed in the West. However, the emergence of Terrence Jones (career-high 36 points, 11 rebounds, 2 blocks, 14-20 from the field, 0 turnovers) has been just as important, who has made Houston feel even more at ease with Omer Asik’s eventual departure. After making an off-balanced layup to extend the lead to 112-97 with 2:24 to go, the Toyota Center gave its second-year player a standing ovation. James Harden (22 points, 5 steals, 7-10 from on free throws) continued to draw plenty of fouls, as he has attempted at least 10 free throws in six of his last nine games. Brandon Knight (26 points, 7 assists) and John Henson (20 points, 15 rebounds) had solid performances while their team shot 50 percent from the field. However, Milwaukee hurt themselves for most of the night, only shooting 13-21 from the charity stripe and having 19 turnovers. To give his team an 87-73 lead at the 2:20 mark in the 3rd quarter, Howard jacked up and made a 3-pointer, his second of the year. Houston led by double-digits the rest of the way. The Bucks have now lost eight games in a row and are the only team in the League without double-digits wins.

Give credit to the Timberwolves defense or blame the lack of offense for the Jazz, but this Utah team simply couldn’t make shots Saturday night. Not a single Jazz player shot above 50 percent and the entire team shot 21-73 (28.8 percent) from the field. This is the worst field goal percentage for a game in Utah’s franchise history. The Jazz had less points than the total time played by halftime and trailed by 28 points. During one sequence in this first half, Derrick Favors (8 points, 10 rebounds, 3-10 from the field) was rejected on two straight dunk attempts…by the rim. This was quite possibly just the type of game the reeling Wolves needed, as they had lost their previous three games and fell to a season-worst three games below .500. Minnesota’s frontcourt all played well as Kevin Love (18 points, 13 rebounds, 5 assists), Nikola Pekovic (27 points, 14 rebounds) and Kevin Martin (20 points) were each able to play under 30 minutes on the night. The Timberwolves controlled the boards (60-42) and assists (25-12) while Alec Burks (18 points, 4 assists) came closest to having a good game for the Jazz. Love and Pekovic showed off some smiles that hadn’t been seen in quite some time.

Led by Stephen Curry (28 points, 8 assists, 6 rebounds, 4 steals, 0 turnovers), the Warriors used a three-minute stretch in the 3rd quarter to hand the Pelicans their eighth straight loss. After an Anthony Davis (31 points, 17 rebounds) alley-oop late in the 1st half, the Pelicans grabbed their largest lead of the game, 50-39. However, the Warriors would respond by going on a 9-0 run and only trailed by two going into halftime. Tyreke Evans (14 points) made a jump shot to tie this game 64-64 with 4:54 to go in the 3rd quarter. Then Curry decided to take over. As Golden State went on a 15-2 run, Curry scored or assisted on all but the first basket scored by David Lee (22 points, 8 rebounds). When Curry gets in his zone, he is one of the best at taking over games. The Pelicans stuck around early in the final quarter—all thanks to Davis—but couldn’t score enough points down the stretch to keep up with Golden State. Scoring the first 5 points of the 4th quarter, Jordan Crawford (10 points, 13 minutes) played well off the bench while Andrew Bogut (10 points, 15 rebounds, 5 blocks) had a big double-double. Curry passed the ball very well on the night, having no turnovers for the second time this season. New Orleans only shot 38.6 percent from the field and will look for an elusive win against the Grizzlies on Monday.

The Mavericks had recently played two energy-draining games against the Clippers and Suns, and it showed against LaMarcus Aldridge (30 points, 12 rebounds, 3 steals) and the Blazers Saturday night. Before the Americans Airlines Center had something to cheer about, this game was clearly over as Dirk Nowitzki (18 points) and the Mavs just had nothing in the tank. Rick Carlisle threw a handful of players at Aldridge but the forward’s strong low-post play and high release were too much for these Mavs defenders. Aldridge might currently be the best power forward in the West. The Blazers led by double-digit after the first 12 minutes and just when the Mavs looked to be within striking distance after a Jose Calderon (5 points, 3 assists) jump shot cut the deficit to 52-43 with 4:44 to go, Portland stepped on the gas and finished the half on a 19-9 run. Behind plenty of free throws and 3-pointers, the Blazers then won the 3rd quarter 33-18 and closed this out before the final quarter even began. All five Portland starters scored in double-figures as Damian Lillard (14 points, 10 assists, 5 rebounds) played the role of distributor and Robin Lopez (16 points, 12 rebounds, 3 blocks) was a major reason his team outrebounded the Mavs 55-30. Lopez had 15 double-doubles over his first five seasons in the NBA and has already matched that amount this season. Portland also ran the floor well, having 31 fast break points. Devin Harris (6 points, 17 minutes) played in his first game for the Mavs following toe surgery. The Blazers have now won five in a row and are tied with San Antonio for the best record in the West.