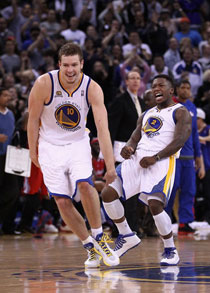 It was a prototypical David Lee moment. He was seated in front of his locker before a game, seemingly relaxed and joking around with a teammate and a reporter. It wasn’t established that any of his banter was on the record, so out of respect I discreetly switched off my voice recorder and slipped it into my pocket.

I didn’t think he’d noticed and was startled when he stopped and looked up at me.

“You can leave it on,” he said evenly. “I know everything is on the record.”

To witness Lee address the media is to witness an exercise in near-complete self-control and pitch-perfect public relations. After five years in the crucible of the New York press, where a show of emotion or a misplaced phrase might be deconstructed in the morning tabloids, Lee emerged a cool customer. No matter how the Warriors are doing, his absolute polish in addressing it can always be counted on.

That, and Lee getting a double-double or coming close. Now in his second year with the team, he is quickly approaching the 20-point 10-rebound per game production for which he was signed to a six-year, $80 million contract.

Lee sat down with SLAMonline this week after a mid-day practice and offered a rare glimpse beneath his unflappable surface in a wide-ranging chat, covering everything from the famous tenant of his New York apartment to accusations of stat stuffing.

SLAM: Lately you’ve been having your best games as a member of the Warriors. Can you talk a little about your progression since you arrived in Golden State?

David Lee: It’s been an adjustment. Just moving from one coast to the other and getting used to new surroundings takes awhile, let alone adjusting to new teammates. And then I was out with the elbow injury last year, which held me back a bit. But I feel real confident right now in the way I’m playing, and I feel like I’m playing the best ball of my career.

SLAM: You grew up in a family where you had a lot of options for what to do with your life. What would your parents have done if you’d said when you were 15 that you wanted to quit basketball and get a business degree?

DL: They wanted me to be passionate about whatever I chose to get into and give it 100 percent. That was always basketball for me. I always enjoyed it and enjoyed the team camaraderie aspects of it, and I enjoyed trying to become a better and better player. I always wanted to be a college basketball player. I thought that would be really cool.

When you’re a kid you dream about making the NBA but it’s not a reality until you get older and you see you have a chance. My initial goal was just to play college ball.

SLAM: Who was your favorite player?

DL: Michael Jordan. When I was a kid, if my grades were good once a year we would go to Chicago because that was the NBA city nearest to St. Louis, and I would get to see Michael Jordan play.

SLAM: A lot of skilled big men started off wanting to be guards…

DL: When I was a freshman in high school I played point guard, and then I grew between freshman and sophomore year. I kept some of that. I wasn’t the biggest kid when I started. I had to learn ball-handling skills and passing.

SLAM: What is it like having Nate Robinson as a teammate again?

DL: That guy is a great teammate. He has really energized me again this year. He sometimes gets a bad rap for being a distraction or a bad teammate or something, and I don’t know how that came about. He is an unbelievable human being. He is loud, obnoxious and full of energy at all times—during wins, during losses, whether he’s having a good day or a bad day—and there’s something to be said for that. There are a lot of long days when you’re in this League. When you’re playing three games in four nights and you’re traveling, it’s two in the morning, maybe you’ve just had a tough loss and everybody’s heads are down, he’ll never let you be in a bad mood. It’s great to have him as a teammate again.

SLAM: On Nate’s first day with the Warriors he was sitting in the middle of the locker room before a game, with you on one side of him and Monta Ellis on the other. There had been reports of controversy between you and Monta. Did Nate help bring you guys together?

DL: I think the public controversy wasn’t fair. Monta and I never had an issue with each other. And on the court, I think if you looked at it you’d find something like 60 percent of his assists go to me and vice versa. I think that was people trying to make something out of nothing.

SLAM: You’ve had a lot of ups and downs during your years in the League. How do you deal with losses?

DL: I’m not very much fun to be around, to be honest with you. My girlfriend oftentimes kind of has to realize when to take a step back and leave me alone for an hour or two while I play video games or something. I’m very hard on myself. If I feel I could have done something better to help us win the game it really bothers me. The best thing for me is to get back on the court and play the next game. That’s the one good thing about the shortened schedule this year: After a tough game, you’re back on the court a day or two later.

SLAM: In the locker room you’re about the same after a win or a loss—you’re easygoing and your answers to the media are polished and sharp. But sometimes I’ve wondered if you’re just boiling inside.

DL: Absolutely. But I’ve learned. I’ve had teammates in the past who’ve let that get the best of them, and all it does is complicate the problem. I’ve seen people call out teammates, call out coaches, get mad at the media… To me that does nothing but make things more difficult and it doesn’t accomplish anything. There have been times I’ve thought about doing that and I wake up the next day and think, “Thank God I didn’t do that.”

SLAM: You have a lot of young teammates this year—you’re a veteran now.

DL: I know. I’m an old man on this team. I try to lead by example. I always take the first bus to the game, I’m always the first to get shots up and I try to keep a very strong work ethic and do things the right way. I think that’s what young guys need to see more than anything else.

There’s nothing worse than a veteran or a captain telling a young guy, “Hey, you’ve got to do it this way,” and then they’re not working hard [themselves]. That sends a horrible message. Not to name names, but people did that when I was a young guy in New York. They’d be like, “You have to get there early,” and then they’d be the last ones on the floor. That confuses the young guys. They need to see the veterans and the captains are the hardest working players on the team. It’s very important.

SLAM: I have to ask you about your new tenant…

DL: Jeremy [Lin] is a great kid. He’s going through a lot of media pressure right now. I don’t even know if he’s going to end up living in the place or what’s going to happen. I got to know him a lot last year. He’s a good human being and he worked his butt off. It’s a great story.

SLAM: Could he have done what he’s doing now, or something close to this, last year in the right situation?

DL: That’s tough to say. It’s a different system and a different opportunity. To be honest with you I can’t explain what’s going on with him right now. Jeremy is a great player, but there’s a difference between Jeremy being a great player and averaging 25 (points) and 10 assists. There are a lot of great players in the NBA who don’t average that.

I was sitting with my girlfriend watching games together, and she was saying he’s the best point guard in the NBA. And I’m like, Noooo. And she said, “Then how is he doing this 10 games in a row?” And it’s like, Well… There’s no way to explain it. It’s just happening and it keeps happening. I’ve stopped trying to figure out how good he is or what the situation is. Instead I’ve just been congratulating him and continued to text him to encourage him. I’m just happy for him.

SLAM: Talking to opposing GMs and coaches about you, the only negative that comes up is that some think you’re a “stat stuffer”—that you sometimes make decisions within the course of play in order to lift certain stats, such as assists. Have you heard this before? And how do you respond?

SLAM: What’s in rotation on your MP3 Player right now?

DL: A lot of rap, like Lil Wayne, Rick Ross, Jay-Z and stuff like that. I’ve also gotten into house a little bit, like Calvin Harris—Andris [Biedrins] has gotten me hooked on some of that. And last summer I saw U2 in concert. I like their new stuff like “Vertigo” but I also like their old stuff and I listen to their greatest hits a lot—there are just so many good albums and good songs. I try to stay well rounded.

DL: I like Dave Matthews. I’ve seen him in concert 15 times. He puts on a great live show.

— Too $hort delivered an electric performance between quarters at Monday’s Warriors game against the Clippers. The team is now 2-0 when the Oakland-bred rapper blows his whistle.

— Warriors owner Joe Lacob blames former coach Keith Smart for not playing Jeremy Lin last year as a rookie, but isn’t that what happens when you basically tell a coach he’s fired if he doesn’t make the Playoffs? And where does the buck stop?