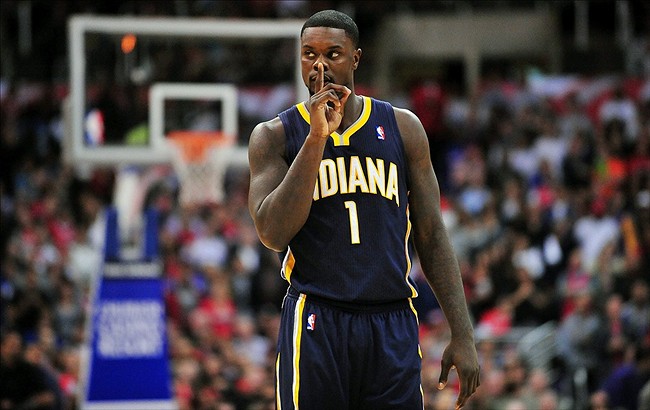 The streets of North Philly are oozing with basketball history. Stroll down Broad Street and you’ll find your way to the Liacouras Center, the home of Temple basketball since 1997, back when it was called The Apollo of Temple. While it’s the home of the Owls in the winter, the venue is buzzing with hoops all year long, especially in the summertime.

This weekend, the folks at AND 1 are hosting the annual Summer Remix tournament at Temple, a 12-team, win-or-go-home home battle for a $100,000 grand prize. The teams feature mostly former college players. But some NBA veterans like Hakim Warrick, Flip Murray, Keith Closs, Kenny Satterfield and former Owls, Dionte Christmas and Micheal Eric, saw action in the tourney’s opening day on Thursday as well.

But the biggest name in the building wasn’t a guy who was suited up to play. Lance Stephenson, the new face of AND 1 basketball, sat courtside to take in the pro-am action. Decked out in AND 1 gear, the Pacers guard was scouting out the talent his team, Team Born Ready, will be facing later on in the event.

In between games, SLAM caught up with the Lincoln High product to talk about his offseason, the new-look Pacers and his weekend in Philly.

Lance Stephenson: It’s been good, everything’s been going good. I’ve just been working out and getting ready for the season. It’s a big season, so I’m trying to keep my body in shape so I can be ready to go the whole way through.

SLAM: What are some of the things you’ve been working on?

LS: My jump shot, defense and just all of the little things that will help me out next season.

SLAM: The Pacers made a few big off-season moves, what are your impressions of them? Have you guys retooled enough to get over the hump and reach the NBA Finals next June?

LS: I’m happy wherever, to be honest, as long as minutes come my way [laughs]. As long at I can help us win and get to the Championship, I’ll do whatever it takes. It don’t matter for me.

SLAM: You were selected low in the Draft, but now you’re becoming one of the top players on your team. What’s that like?

LS: It’s just been a lot of hard work, hard work and dedication. I watched others players, like Danny and Paul [George], to see what they did so when my opportunity came I could be able to showcase my talent. I had a wonderful season last year, but last year was last year. I gotta find a way to do that again and be even better.

SLAM: We’re here at the AND 1 Summer Remix tournament in Philly and you’re easily the biggest name in the crowd and pretty much the face of AND 1 basketball. What’s that experience been like?

LS: Ah, man it means a lot. I’ve loved the AND 1 company since I was little, so for them to pay me to promote them is a freaking blessing. I’m just using this event to have fun, entertain the crowd and interact with some of the kids.

SLAM: The event program says you’re coaching Team Born Ready. Are you going to be storming up the sidelines, yelling instructions? Or are you just going to sit on the bench in your AND 1 gear?

SLAM: Are you going to draw up plays?

LS: Hell yeah, I’ll be drawing up plays! I’ll be taking some plays from Frank [Vogel] and I’ma use it for this team.

SLAM: Can you give me an example?

LS: Man, I can’t tell you! That’s my secret strategy.

SLAM: Is there a certain type of style that you like to play in the most? Is that the tempo you’ll be coaching?