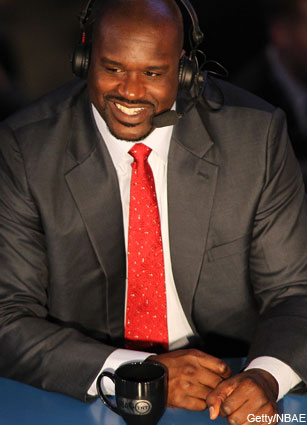 Whether he’s Shaqtin’ A Fool and serving up witty banter alongside Ernie Johnson, Kenny Smith and Charles Barkley on TNT’s five-time Emmy Award-winning post-game show, Inside the NBA, or putting together top-tier comedy shows (Shaquille O’Neal All-Star Comedy Jam) that launch careers (Kevin Hart) or making headline grabs with his antics, Shaquille O’Neal is still the same force to be reckoned with now as he was when he was wreckin’ shop against all comers on the low block in the NBA.

Not surprisingly, the former Laker great, never one to rest on his laurels, has another endeavor in the works. TruTV, the Turner-owned cable network best known for hit series such as Impractical Jokers and Hardcore Pawn, just signed off on 10 episodes of Upload with Shaquille O’Neal, a series that will focus on the future Hall of Famer scouring the ‘Net for LOL-themed videos and clips, as well as original skits, parodies and viral videos put together by the four-time NBA Champ and his team of writers. Shaq Diesel will be joined by comedians Gary Owen (Think Like A Man) and Godfrey (7 Up’s “Make 7 Up Yours” Guy), who will help bring the funny. Lucille O’Neal’s 7-foot baby boy chopped it up with SLAMonline to talk NBA All-Star Weekend, Kobe Bryant and comedy.

SLAM: What did you like most about All-Star Weekend?

Shaquille O’Neal: Just coming here, seeing all the entertainment, seeing all the superstars and all the parties, of course. It was an easy one for me because I actually live in Houston. It’s usually hectic getting the whole family together, getting a hotel, but I actually live in Houston, so I stayed at the crib with the fellas and fellas in hotels around the corner. But for the last couple years, I’ve been in Daddy mode, so I remember when my father took me and my cousin to our first All-Star game and I got to see Dr. J play, so right now with me being in Daddy mode, it was good to get my kids to the game. They all love LeBron and DWade and Kobe and those guys, so they got to see them.

SLAM: Who is your favorite player in the League right now?

Shaq: LeBron is somebody I see taking over. He’s hot right now. He’s doing something that’s rare. I see him getting four MVPs.

SLAM: And you’re OK with your kids liking LeBron more than you as a player?

Shaq: Oh yeah, no problem with it. Never that. Even though my dad was the best player in my neighborhood I’ve seen in my life, Dr. J was the man.

SLAM: There was a photo circulating on the Internet of you and Kobe talking during All-Star, what did you guys talk about?

Shaq: We were just laughing. You know, I think it’s a real misunderstood misconception that we hate each other. They don’t understand that it’s business. You either focus on the relationship or focus on the task. And I was focused on the task. So whenever you have two Alpha Males like me and Kobe, you’re going to disagree from time to time, but we never hated each other. When I see him and his wife and his beautiful daughters, it ain’t like we’re gonna go to blows. We had words, we had beef, but when you look at what we’ve done on the court, we’re the most dominant little man, big man ever. Ever created. I don’t care who you put us up against. We were the most dominant little man guard to big man in the League. And if I had it to do all over again, I’d do it the same way. Create the drama, create the press, and create the arguments. We won three out of four and that’s all that matters. We had a good laugh and it ain’t really nothing to talk about. I think a lot of the stuff was more about the media because they got tired of talking about our dominance. They had to come up with something else. Oh, they don’t like each other. But obviously we liked each other enough to win three out of four.

SLAM: Tell us about your new show on TruTV, Upload with Shaquille O’Neal.

Shaq: We just talk about all the funny clips and videos on the Internet. There’s a lot of different shows out there, but you know how they say a picture is worth a thousand words? It’s the same thing with clips, so a lot of people put they spin on clips. Mine is gonna be different because I have two comedians helping me. I got Godfrey and I got Gary Owen, so they’re comedians by trade and they’re funny. I got some good writers on the show, too. It’s on TruTV. TruTV’s kinda out there, so they let us do what we want and for the TruTV audience, I think it’s gonna be great.

SLAM: With the way you love comedy, you must have wanted to be a comedian in another life.

Shaq: Actually I did. I’ve always been the class clown and I’ve always been funny. Comedy is something I wouldn’t do, though. It’s like being an MC. That first line gotta be dope. If that muthafuckin’ first line ain’t dope, you gonna be in trouble, so it’s probably something I wouldn’t do, but I like comedy. I believe laughing relieves a lot of stress, so when I saw that Russell Simmons wasn’t doing Def Comedy anymore, I saw that it was an opening and something for me to do and I have the number one comedy brand in the world and I’m not going anywhere.

SLAM: You’ve made some comedians’ careers.

Shaq: I made Kevin Hart. Well, I don’t wanna say made Kevin Hart, but we had a great platform for him to do what he does best. We just wanna do great shows and create other opportunities for other people. I’m just trying to create good shows. We’re just getting off a 25-city tour. I’m sure somebody sitting down somewhere is that next comic hopefully they’ll be on my tour one day.

SLAM: You’ve been on the show with Ernie, Kenny and Chuck for a while now. How do you think you’re doing so far?