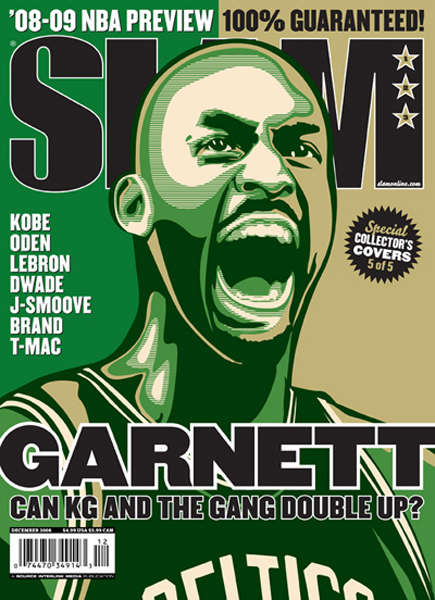 The new season is here, and that means it’s SLAM’s NBA Preview issue time. We had a tall order in trying to be more relevant than last year, when we got a solo shoot with the biggest star on the eventual NBA Champions, but you know we had to try. As you can see in this post, we actually went with a SLAM-record five covers, a massive undertaking that required more than my usual little Editor’s Letter. I asked for extra space in the magazine and I think what I wrote there is just as relevant here on the site, not only to explain why we did these covers, but how you can get them, and I’ll get to it in a minute.

As for the actual Preview, that was Lang‘s domain. Obviously we’ve been running season previews on the site for a while now, but Lang will also hit you with his personal preview from the magazine soon. This new issue also has great features on Elton Brand, Josh Smith, Russell Westbrook and Gary Payton, but ultimately it’s going to be these covers that people remember.

Check them out here, and then read my “6th Man” Editor’s Letter below. And then sing our praises. Or hate on us. You know we can take the good with the bad.

There are some commenters on Slamonline.com who complain that they don’t want to see political discussion on our site because they want to “get away from all that.” I respect that view, but in the case of our website, our writers are free to write whatever they like, and readers are free to read—or not read—whatever they like as well. Besides, it’s largely a moot point because I think if I said four percent of the posts on our site have a political angle, I’d probably be erring on the high side.

Here in the precious pages of our magazine, the numbers are probably even lower. Sure, we’re proud to bring you Dave Zirin’s politically charged columns every month, and occasionally we profile a former player whose story has a deeper slant (Mahmoud Abdul-Rauf, Tim Hardaway, Craig Hodges, to name three), but this is largely a politics-free zone. Which, by the way, is generally how we like it: SLAM is about basketball.

To quote Executive Editor Lang Whitaker quoting Stephen A. Smith, HOWEVA, these are unique times. We’ve got about a month to go until the Presidential election as I write this (two weeks or less as you read it), and there’s a candidate who is on the verge of winning with more of a direct appeal to both young people and basketball fans than any candidate in my lifetime (ever, for the basketball part).

It was with this historic backdrop, in which a young, charismatic leader who plays pick-up ball every chance he gets (sounds a lot like the demographics of our readership, no?) is campaigning for the Presidency, that your friends at SLAM sat down to plan our NBA preview cover(s). The regional idea was the first to be brought up (we’d done three regions in the past—why not get our SI on and go for five or six?). Then Lang proposed using Obama’s campaign slogan of hope—and the corresponding poster—as our inspiration. Not so much to promote Obama (we were going to play off of McCain’s “Country First” slogan as well, but Bryant Reeves has been retired for a few years now) but as a nod to the pop-culture relevance of said campaign images and the connection between the NBA preseason and a Presidential campaign.

An idea had been hatched, and the more I thought about it, the more I liked it. After all, this time before a season is like a campaign. Much like the candidates keep talking about all they’re going to do that’s going to be better than before, everyone in the League is promising to be in better shape, be a better teammate, call better plays, sign better players and on and on. In other words, everyone is giving reason to hope.

So, after removing the otherwise compelling Gilbert Arenas from consideration due to injury and working with the five regions provided by our Publisher (West, Northwest, Midwest, South and East), we as a staff settled on the five players with the most riding on this “campaign.”

Kobe, now owning an MVP and playing with some great teammates—but still lacking a title without Shaq on his team—is unquestionably the man in the West.

Greg Oden, a mystery of sorts—who could turn out to be as productive as almost anyone from Joel Przybilla to David Robinson for all we know at this point—gets the nod in the Northwest because of what that range of outcomes means to his promising team.

In the Midwest, LeBron, a King by our standards for several years, has nonetheless reached the point where an MVP trophy and another trip to the Finals can almost be expected. His roster probably won’t provide as much help as he deserves, but we think he may be able to do it alone.

Down South we’re riding with Dwyane Wade, who had an amazing Olympics and looks to be back in ’06 form. Like LeBron, he might not have the best roster to work with, but a healthy DWade can overcome a lot.

Lastly, we’ve got KG in the East. He did wonders for his rep by winning a ring last year, but you know how we do in this business: everyone wants to know if he and the Cs can do it again.

The coverlines for these guys basically wrote themselves (not that we didn’t agonize over them like always). Pulling off the images were tougher.

Using the Obama poster as inspiration, Art Director Stephen Goggi crafted these incredible illustrations over two arduous weeks and then turned them over to Creative Director Melissa Brennan for the finishing touches. I hope you all agree that they made some outstanding covers.

So outstanding, in fact, that some folks are probably going to want all five. Let me try and shortcircuit the letter writing and emailing sure to follow on this topic. Here’s how things are going down: subscribers and foreign newsstands are getting Kobe (call us commercial, we don’t mind), while newsstands in the various regions should be getting their regional cover (for example, DWade in the South, Kobe in the West). There may be some odd overlaps, but for the most part, you may only have direct access to one cover. In that case, if you want a different one(s), go to simbackissues.com, click on SLAM, and find the December cover you’re looking for.