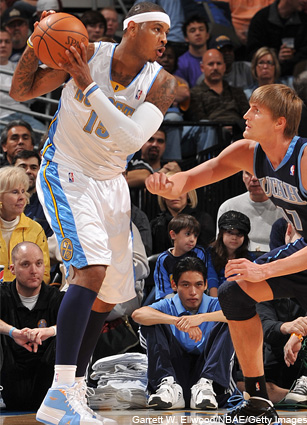 Happy Birthday to you, Mr. King. Even though I haven’t had to experience and couldn’t possibly understand so many parts of your fight, thank you. Thank you for your bravery and your truth.

There were but two NBA games on the schedule yesterday because it was a football day.

After the Raptors rolled all over the Mavs 110-88 –no, that’s not a typo– Chris Bosh was getting ribbed by his teammates pretty badly during his postgame interview as his beloved Cowboys gave up another touchdown mid-media scrum.

As much as I love this game, it’s always fun to watch the reactions in the different locker rooms to guys watching their teams/friends/favorite players playing football. Those guys diving, hustling and helping one another out as they don the same uniform, trading sides as soon as the sweaty jerseys are slipped off.

And college loyalties are something else entirely.

Anyway, yes. That’s about how much I have to say about the Raps/Mavs game. I wrote about it here, but really, the game was over before halftime. The Raptors looked great offensively and the Mavs were horrible defensively. It was fun to watch Andrea Bargnani play against Dirk Nowitzki and have another strong game. He’s been piecing together a solid 2010 so far and he continues to impress with his commitment to crash the boards and rebound and mix up his game.

Chris Bosh had 23 points and 13 rebounds and became the NBA’s leader for double-doubles on the season with 29. He’s been so great this year that anything less than a double-double is an off night that doesn’t feel right.

Jose Calderon had a fantastic game off of the bench, but of course this leads to the question of how long the Raptors will be able to continue to keep him as a reserve. There are a few trade rumors out there concerning Calderon, but I’m not ready to think too seriously about any of them just yet. It’s going to be an interesting trade deadline this year.

Josh Howard? He looked awful. It almost hurts me to say this because I’ve defended Josh for years and have always maintained that I’d like him on my team, but yesterday afternoon the guy did not look like an NBA player. Hopefully he shakes the rest of yesterday off and can get himself back on track against the Celtics today. That’s a game I’ll be watching for sure.

One more little Mavs note: Next time you’re watching Dallas, check out the length on Rodrigue Beaubois. The man’s arms are ridiculously long. He’s listed at 6’2″ (I’m giving him 6’1″) and he’s got a winspan of just under 6’10” a 6’9″. Crazy. He didn’t play well in his nine minutes of burn yesterday, but he’s an exciting young guy I think we’ll all know more about sooner than later.

When do the Wizards begin blowing things up?

As for the Jazz falling in Denver, well, fantastic game by Carmelo Anthony who scored 37 points, but are we really surprised that Utah lost on the road to the Nuggets? I’m not.

I did love Chauncey Billups getting called for a technical as he was sitting on the bench for arguing a non-call on a Melo drive. Love the leader standing up for his superstar. Billups also had a nice game of his own, scoring 29 points as he got to the line 19 times.

Despite shooting 52 percent for the game, the Jazz fell 119-112 to Denver. They were sloppy, turning the ball over 20 times, but the real difference in the game was at the free throw line. Denver, the aggressors from the jump, attempted 49 free throws, making 41. In comparison, Utah made just 20 from the stripe, out of their 27 attempts. There’s the ballgame right there.

Who was everyone rooting for in the NFL yesterday?

I think I’m quickly learning that the Dallas Cowboys are the Kobe Bryant of the league. People get divided when it comes to that team. It’s either straight love, or furious hate.

I don’t have a real team yet, but I’ll tell you, Donte’ Stallworth warmed my heart by deciding to donate $1 for every follower he had on his Twitter account by midnight to Haiti relief. Along with this gesture, his fellow NFLers’s were tweeting back what they would join in. I also need to mention the efforts given by Dwyane Wade, Alonzo Mourning, the NBA as a whole and of course Sam Dalembert, who has taken this tragedy and given his face, voice and heart to bring awareness.

Props to each and every person, pro athlete or not who has given what they can to help the people of Haiti in this time of need. Sports are so special on their own, but when the athletic community rallies together in times like these, it is a reminder of just how special they can be.

One more thing before we go…. Much love to the boys of The Basketball Jones for the amazing 500th episode party they held this past Friday night. Your girl took a night off from the NBA schedule, laughed lots, smiled until my face hurt, accepted far too many drinks on a night when I had practice the next day and once again was reminded how much I love this basketball world I’m living in.

The guys were amazing, entertaining and authentic as always.

I’m so proud of what their vision has become.

On this MLK day, I wish each of you at least a moment where we get to stop, be thankful for all that we have and appreciative of the people we have to share it with. Enjoy your NBA tripleheader. I’ll catch you here tomorrow.