We talk all things dunking with the Magic guard and 2015 Sprite Slam Dunk Contest participant. 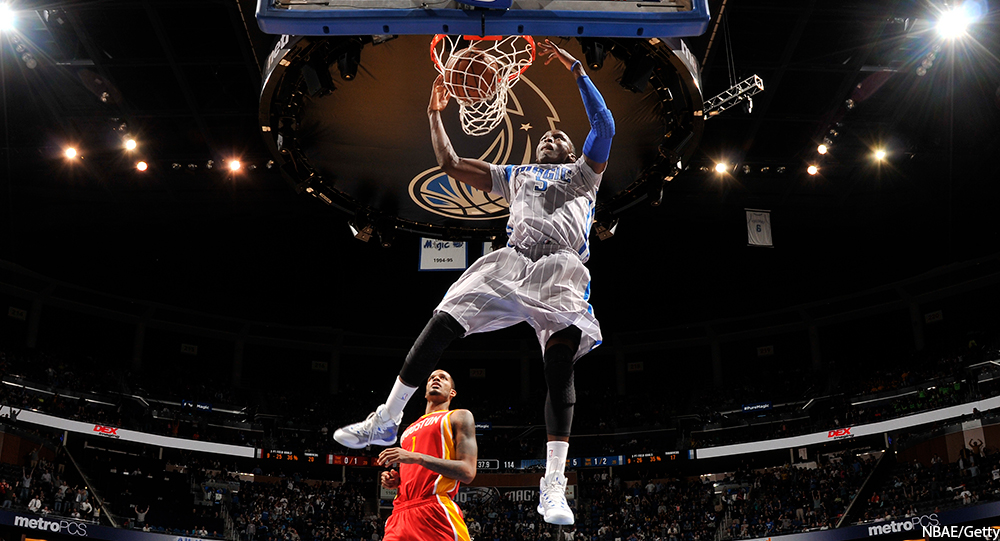 He’s probably the dark horse among the group. Zach LaVine’s jumping ability is well known at this point. Mason Plumlee will be the home town favorite, and his height gives him the ability to try some different things. And Giannis Antetokounmpo, well, he’s called the Greek Freak for a reason. It wouldn’t shock anyone to see him take off from behind the foul line at some point next Saturday night.

But don’t sleep on Victor Oladipo. He’s a part of the 2015 Sprite Slam Dunk Contest—which will take place February 14 at the Barclays Center in Brooklyn—for a reason. And, as you can see below in our conversation with him, which took place last week over the phone, he’s taking this thing seriously. What can we expect from him? He wouldn’t reveal too much, but Oladipo did share an idea that one his teammates had. He also talked about some of his favorite dunks, and dunkers, of all time.

SLAM: So, you excited to be in the Dunk Contest?

Victor Oladipo: Yeah, growing up I always dreamed about being in it. It’s pretty cool that I get to actually experience it so I’m looking forward to it.

SLAM: When did you dunk for the first time?

VO: I think the first time I ever dunked was in the eighth grade. We were just fooling around in practice, guys were throwing it up, alley-ooping it to us and I went up and dunked it crazy. They threw it towards the middle of the rim and I went up and grabbed it with two hands.

SLAM: Were you surprised?

VO: I really was always kind of athletic, but never really could jump that high. I was surprised and excited at the same time. I was more hyped than anything. It was kind of crazy, but it was pretty cool.

SLAM: How tall were you then?

SLAM: What’s your best dunk ever?

VO: Probably in high school, when we were playing against a team called Spalding, from Baltimore, and one of my teammates kind of threw it up—Quinn Cook, he plays for Duke—he threw it up and I jumped and the guy guarding me jumped too and that kind of boosted me higher and I was like kind of like, my head was over the rim, well over the rim. That was probably the best dunk I ever had.

SLAM: You got a favorite time you dunked on someone?

VO: My first high school varsity dunk I ever did was on somebody. Those were actually my first varsity points. We came down and the guy was trying to block me from behind, and he chased me down, and I kind of slowed down because I was trying to dunk it. He came and caught me and he jumped and I jumped but I dunked it. I kind of dunked it on him. My first varsity points—that was kind of crazy.

SLAM: Who’s your favorite dunker of all time?

VO: Um, probably MJ and Vince. MJ just did it so easy, he just made crazy stuff look easy. And Vince just brought a new flair to it. That Dunk Contest was just crazy. One of the first ones I remember really watching. It was just insane. That between-the-legs one he did, when Tracy dropped it and he took it between the legs, that’s probably my favorite dunk ever.

SLAM: Have you competed in dunk contests before?

VO: Yeah, in high school I did them all the time.

VO: Yeah, I did pretty good [laughs]. Then I was just really good at jumping over people. Just lining people up and jumping over them was my big thing.

SLAM: Is that something we can expect to see from you in Brooklyn? You got any hints for us?

VO: Oh, maybe, I don’t know. We’ll see. We got a lot of talented dunkers in the Dunk Contest so I gotta do something to stand out.

SLAM: You preparing or practicing?

VO: Yeah, there’s some stuff I’ve been thinking about for a while, so I won’t just be thinking about this the night before. Nothing too crazy, since we are in a season, but I’ve been practicing a bit.

SLAM: Are your teammates giving you advice?

VO: One dude told me to come out dressed as Prince Akeem from Coming to America, and have rose bearers.

SLAM: Who said that?

SLAM: You get any other crazy suggestions?

VO: I think that’s probably the funniest one.

SLAM: Who are you worried about in the contest?

VO: I mean, all the guys are really good. Mason and Giannis, they’ve got something going for them because they’re long and athletic. And everyone knows about Zach LaVine, so, shoot, he just does crazy stuff. So I’m going to have to be ready.

SLAM: You going to be using props, or just focusing on the dunks?