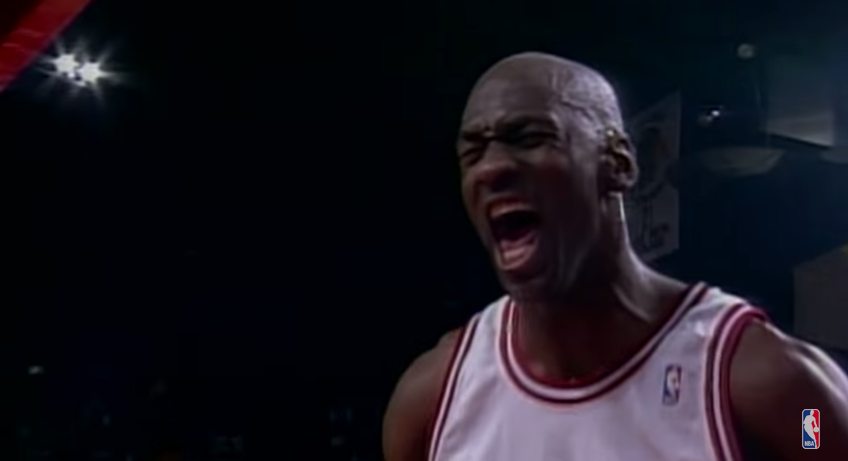 As everyone knows, it was never a good idea to talk trash to Michael Jordan during his playing days.

Kendall Gill shared a fun story Thursday from the 1992-93 season, about how his wayward mouth got him (along with poor rookie Charlotte Hornets teammate Alonzo Mourning) in trouble with a fired up MJ.

The Chicago Bulls were trudging through the regular season, en route to their first three-peat, when Gill and the brash Hornets inadvertently lit a fuse under Jordan:

Me, Larry Johnson, and Alonzo Mourning were young upcoming guns in the league. We were feeling ourselves in this game because we were giving it to the Bulls. After this play our Wild oats quickly became shredded wheats! Alonzo had just blocked 2 of the Bulls shots. We started talking smack. I could since MJ getting mad because We were matched up against each other. I didn’t give a crap though because I was young, dumb and didn’t know any better. MJ back doored me out of the triangle offense and put Zo on his collection of posters. Lol. Moral of this story? Callin out the Devil is one thing. Facing him is another! Never tug on Superman’s cape unless you’re absolutely ready! Did you hear me Pacman?

Mike torched Charlotte to the tune of 52 points, including a pair of poster jams in Zo’s grill, as he led the Bulls to a convincing 123-108 win at the old Chicago Stadium.

“We had something to prove tonight,” said Jordan, who had his 26th game of 50 or more points, his fourth this season. “They beat us last time (at the Stadium in January), and some of the comments in the paper were that they were on the same level as we were. We remember that stuff, and we wanted to show the difference.”

Certainly Gill isn’t ready to say anything more. “I kind of talked a lot when we beat them here the last time, and he was just giving it back to me,” said the former Illini star. “We expected what we got tonight, but they have to play us one more time at our home.” […] After the Bulls’ eight-point loss to Charlotte in January, (Phil) Jackson had questioned his team’s heart and suggested that perhaps they were getting too old to keep up with the young legs of a talented teams like the Hornets. Players like Gill merely rubbed it in.

The Hornets had caught up, said Gill. Jordan didn’t forget a word. […] “On one given night, maybe,” said Jordan with a veteran’s grin. “But on a consistent basis, no.”