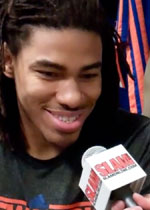 Chris Copeland’s basketball odyssey took him around the world, before his current stop at one of the world’s most recognizable franchises. After going undrafted out of Colorado in 2006, Copeland continued his basketball career in Belgium, Germany, Holland and Spain.

The overseas veteran is now a 29-year-old rookie for the surging Knicks. New York has put together a 10-game win streak, and currently sits a half game above Indiana for the second seed in the Eastern Conference.

In his first NBA season, Copeland is averaging 7 points in just under 13 minutes, and has started nine of 48 games. He practices with the Knicks’ veteran-filled roster, and learns from bigs who have spent over a decade contributing to NBA teams.

Many find it hard to identify with the careers of current basketball players because they focus on those who have garnered recognition since high school and AAU days. While it may be less glamorous to study the careers of journeymen and 29-year-old rookies, the lights of MSG shine equally on superstars and those just looking for their chance. Across the crowd, the lights shine down as well, and when Copeland plays, you may see some of your own journey reflected in him.