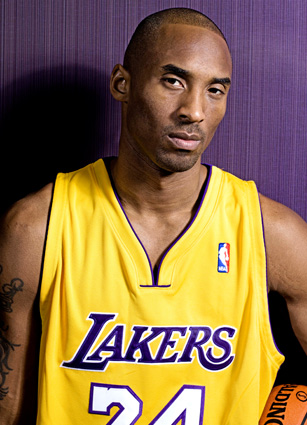 Brian Spaeth is a retired veteran of the NBA blogosphere, and the writer and star of Who Shot Mamba?, a full-length feature film based on his old website. He can be read at his personal site, and can also be found on Twitter.

SLAM: So, tell me about this movie. What inspired you to create it? And how long did it take for the whole thing to come together?
Brian Spaeth: Let’s see, May of 2006 was when the germ of the idea started as a 5-minute short to give the readership of my old blog something to enjoy during the 2006 NBA offseason.

A month later it had become a full feature. 6-8 months after that we’d tried to shoot it a couple times on a mega-low budget, and finally in mid-2007 we were shooting most of what is out there now. Pieces of it were shot later than that, combined with a few re-shoots and other stuff.

Once it was finished we dealt with a lot of issues related to distribution and such – the film was actually more-or-less done in mid-2008. Unfortunately that stuff can take awhile. So the whole process from conception to it being “out there” was about 3 and a half years.

Actually physically making the movie took a little over a year, which is pretty reasonable. I like to say that so I don’t sound too obsessed so as to have spent so much of my life on this project. I apologize for all the math in this answer, as well.

(I actually wrote more in-depth about this process in Prelude to a Who Shot Mamba? – which is a free ebook on the movie’s website.)

SLAM: The title obviously derives from Kobe Bryant’s self-given nickname. With that in mind, do you think the film has appeal outside of the hardcore NBA fan base?
BS: Absolutely – there’s a lot for NBA fans, but it’s not limited to them at all. They’ll just get a little m

ore out of some of the basketball-related winks and nods.

I’ve had several people tell me they had no idea Ben Wallace was a real person – they thought Inflatable Ben was created just for the film. Petey Skippen is clearly a Scottie Pippen parody to anyone with NBA knowledge, but the character stands on his own without that context.

There was a lot of effort put into making sure the material works in this way. It wasn’t always easy, and our director Dustin Pearlman was so helpful with this part. Because of where it was sourced from, I was often too close to the material to see when nobody would get certain jokes and such.

SLAM: If someone stumbled upon this interview, and knew nothing about the NBA (or highly poisonous snakes for that matter), how would you describe this movie to them?
BS: This is always hard cause this thing totally defies genre definition, but basically if you took The Naked Gun and the NBA, threw them in a blender with pieces of Back to the Future and Lord of the Rings, then took that concoction and made a feature film out of it, this is what you’d get.

It’s about a man framed for the murder of his best friend, and the only way he can clear his name is to follow the instructions on an ancient prophesy about a magic basketball – the same prophesy that an iconic basketball star has his own odd obsession with.

SLAM: Do you think NBA players would get a kick out of seeing this? Have you thought about sending a DVD to Ben Wallace so he could watch his inflatable self nearly beat you to death?
BS: I have it on good authority that Ben has seen it or is at least aware of it. He’s a private guy, so I haven’t heard anything. I’m sure any reaction would be positive, since our Ben is shown to be classy, sweet, a good fighter, and someone who enjoys the occasional romantic slow dance.

I expect NBA players would like it as much as anyone – Calvin Stadiums is pretty much perfect NBA icon brought to life. Jordan’s presence, skill, drive, charisma, and gambling addiction, combined with the eccentric quirk of Gilbert Arenas.

I’ll put our 9th and final chapter up against any basketball-based finale in movie history, and I’m not being hyperbolic. This is both because it’s excellent and because the majority of basketball movies are terrible.

SLAM: Tell me about some of the cameos that NBA fans can look forward to in the film?
BS: The biggest is obviously Bill Walton, who plays my character’s father, Kelli Sherman. He was great in the part, and it was cool to see him not playing himself, while still bringing all those qualities that makes him who he is.

That was another instance where someone who knew nothing about basketball will just think the character was interesting and the actor did a great job. Bill’s voice, demeanor, and presence carries a lot of weight, which the role needs. Honestly, he’s perfect for the part, regardless of the fact he happens to be a basketball legend.

Other basketball related cameos include Scoop Jackson as himself, plus maybe my favorite of all, Mark Arnold. Mark was so cool about me completely geeking out about him agreeing to be in WSM?. He plays Calvin Stadiums’ agent, and is absolutely and amazingly hilarious. You’ll need to do your research to figure out exactly what he has to do with basketball history.

The much-maligned NBA synthetic basketball is central to the entire plot, as well.

SLAM: Before you quit blogging about the League, you were one of the more successful and well-read writers in the hoops blogosphere. What are some of the things that led to your decision to quit the game, so to speak?
BS: Boredom as much as anything. I’d always considered YAYsports! NBA a comedy blog, not necessarily a basketball blog. After about a year I kinda felt I’d done everything I could with that combo of format and content.

I’d have to find it, but I wrote a post at some point when I started to get a lot of traffic that stated in no uncertain terms that one day I would get bored and quit out of nowhere. That’s exactly what happened, and then I stayed a lot longer than I should have, and it showed in the work.

Like February to maybe November 2006 is when I think the site was really killing it in terms of quality. Before that it was finding its voice. After that it was getting stale and/or I was distracted with the movie. Either way, I guess I had said all I wanted to say.

SLAM: Having gone through this experience, do you foresee yourself making more films (and specifically, films that deal with quasi-NBA characters?)
BS: Well, I have always had eyes on being a screenwriter/actor/filmmaker. I’d been writing and had scripts optioned before I ever started blogging.

The whole sports blog thing just kinda blew up without me really intending it to. I guess what I’m saying is films were going to come out of me regardless – it just so happened my first legit one used my old site as its source material.

As to the future, I’m constantly trying to get more projects off the ground – I did another short web series late last year that had nothing to do with hoops.

Nothing I’m pushing right now is basketball-centric, unless the Mamba sequel happens. That said, I’ve already used the Petey Skippen and Calvin Stadiums characters in minor roles in a couple books that I wrote, although their main functions there aren’t as basketball players.

I don’t know if I answered your question, but I love basketball, and there will always be nods to it in my work where I can make it happen organically.

SLAM: You’re a Cavs fan, so I have to ask this: What are your team’s chances of winning the championship this season, and do you think LeBron will be a Cav following next summer?
BS: Way too early to say anything definitively – with expiring contracts on both Z and Shaq, the whole roster could look different by the end of February.

I will say this — when LeBron is going at 100 percent for the entire game, they can and do beat everyone. Everyone follows his lead as far as energy levels, and when Mike Brown’s defense is going full-on, it’s pretty unstoppable. They remind me most of the ’04 Pistons how they just smother the ball.

It’s a massive cliche, but ask me this question again in April. If I had to put money on it, I’d say no, because I’m a Cleveland native, and thus expect defeat.

SLAM: Finally, where are all of the places that people can catch this film?
BS: YouTube is a great place, our website has everything, and we’re in the iTunes Store for free.

We’re also distributed to Tivo, Roku, and I think a couple other places. DVD and downloads of the whole film will be available shortly after the first of January — hopefully like some revenue will happen from that.

Mamba may also have a very interesting NYC screening happening next month, so keep an eye on the Facebook Page and/or my personal blog for info.

I hope you guys enjoy our nod to SLAM in Chapter 8 — I was adamant about getting a shoutout to the best hoops mag out there in the film somehow.