Bobbito Garcia's second annual tourney got off to a crazy start. 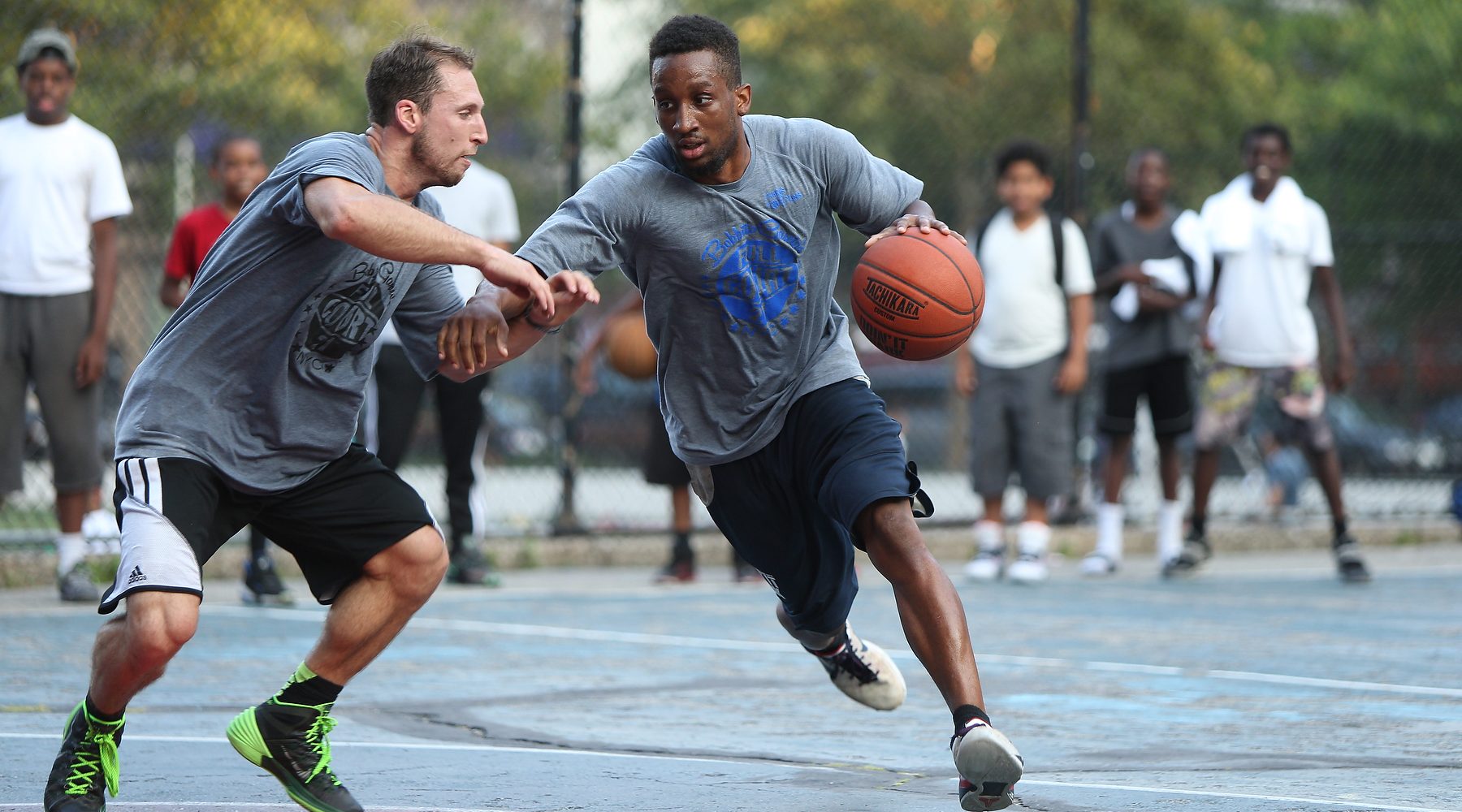 Bobbito Garcia’s second annual Full Court 21 tournament, sponsored by the Knicks, Shirts & Skins and Bball Junkies, got off to a roaring start last night. Booker T. Washington playground, up on 108th Street, between Columbus and Amsterdam Avenues, was packed with fans rocking orange and blue. Tyson Chandler’s face covered the side of the Knicks’ van (awkward) that was giving out t-shirts and other goodies. The Knicks even put up orange nets on the hoops.

The rules of Garcia’s tournament are simple. Every player who steps on the asphalt is a one-man team. With every change of possession, the ball goes the other way. Players have to get to 21. If a player airballs a free throw, they go back to 0.

In the first game of the night, returning champ Matt Thomas, aka The Fullback, needed overtime to take the W. It was the first overtime shootout in Full Court 21’s history. Thomas and newcomer Tyson Hartnett aka Clark Gable​ both broke ICE (getting to 21 points and hitting all three free-throws), but​ couldn’t get over the hump.

Thomas and Hartnett then went into OT. The crowd started gathering as the pair exchanged three-pointers. After a few misses, Thomas drilled one home, leaving Hartnett with a chance to match. It was off the mark, giving Thomas a spot in Week 1’s qualifying game.

The qualifying game is the last game each week. The winner is guaranteed a spot in the championship on August 26.

In Game 2, Kimberly Goodley beat out three other women for her spot in the qualifying game. Goodley is a regular at the West 4th Street summer league and a returnee from last summer, when she held her own against the guys. Bobbito, with his bullhorn, wouldn’t stop talking about Goodley’s West 4th shorts and how nice they were.

Game 3 had familiar faces and a new one. New York City playground legend “BlackJack” Ryan suited up. Dewayne Hamlin aka Moe Lasses,​ a staple from last year’s tournament, showed up with more strength and a tighter handle. But Jeff Leider made sure everyone knew who he was.

On his first touch, Leider busted down the court for an uncontested layup. He gobbled up loose balls and fought the other four players on the court for every rebound. His free-throw stroke was on display, too. He took advantage of nearly all his freebies.

Leider, a 5-10 personal trainer, said it was all part of his plan. “I was trying to be super aggressive because they’re not going to call fouls out there,” Leider said. “I knew it was going to be intense.”

Leider won running away. He had two crazy spin moves and two and ones.

With a crowd of kids hyping up every play between Leider and Thomas, and people lining the sidewalk, we had a battle.

Thomas and Leider bodied each other as much as possible. The crowd clapped and yelled when Thomas made Leider wobble, but the newcomer didn’t back down at all. Other than a filthy Tim Hardaway-esque crossover and up-and-under layup by Thomas, Leider was in full control. He got up to 20 points and had three chances to win the game. But he airballed a free throw, went back to 0 and eventually Thomas was able to eek out the W.

Goodley played well, finishing with 9 points and a little shake that left Leider in the dust. After going back to 0 with six minutes left​, Leiderfinished with 6.

The lack of calls was all good with Thomas. “I train physical,” Thomas said after the game. “I’m used to playing intense. If I can train intense, the game is a cake-walk.”

Thomas has a spot in the championship game on August 26 and a chance to defend his title. Next week’s games start at 6 p.m. EST on July 29 at Booker T. Washington playground. ​Check fullcourt21nyc.com for complete info.​