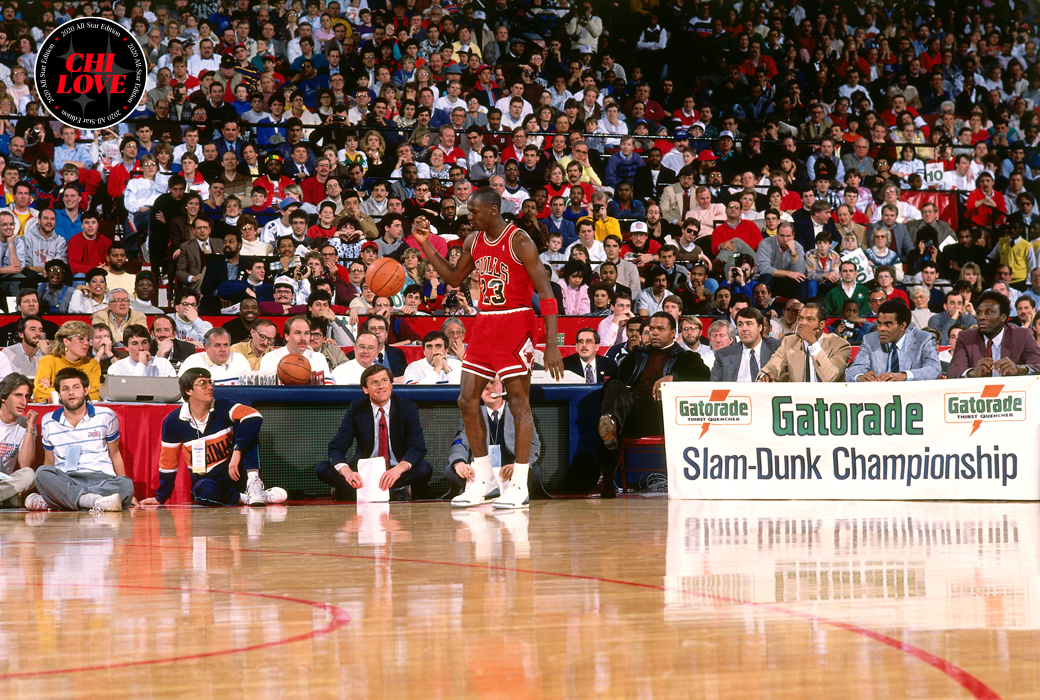 That’s the best way to describe Chicago in February, most years. We’re talking that long-underwear-wearing, seeing-your-breath, can’t-hardly-go-outside type cold that you feel in your bones. But in February of 1988, the last time NBA All-Star Weekend came to the Windy City, there was no hotter ticket.

The main event was Saturday night’s Dunk Contest: Michael Jordan vs. Dominique Wilkins. Jordan and Wilkins had squared off in the 1985 Slam Dunk Contest when MJ was just a rookie, with Nique taking home the hardware. But injuries starved fans of the much-awaited rematch for three years. Spud Webb won in ’86 with MJ sitting out, and Wilkins didn’t participate when Jordan won it in ’87. The drama built and built, as finally the high-flying duo would face off in Chicago. Mind you, these weren’t just the two best dunkers in the NBA at the time, but also the League’s top two leading scorers that season.

Of course, in 1988, there was no texting, no Instagram highlight pages to see NBA highlights instantly (horrifying, right?). For the players, short of checking the box scores in the newspaper every morning, All-Star Weekend was the only real time during a season to check in with your friends from around the League. That made it equal parts competitive basketball and fun-as-hell bonding session. Which is why, starting in Denver at the 1984 All-Star festivities, future Hall of Famers Isiah Thomas and Magic Johnson rallied the other perennial participants in the game to sit courtside during the Saturday night events, just to kick it and support their (freakishly athletic) peers.

“It’s funny, when we talk about the framers of the Constitution, in terms of Ben Franklin, John Adams, so forth and so on,” says Thomas, reflecting on the evolution of that tradition, “I look at what we did in the sport of basketball, particularly around the All-Star Game—Magic and I were kind of framers of that weekend, in terms of how people participate, look at it and play in the game.”

Best believe Zeke, Magic and the rest of the All-Stars were on the hardwood for the Dunk Contest in ’88. NBA Senior Photographer Nat Butler also had a courtside seat that night, from which he captured iconic flicks of MJ soaring toward the hoop, tongue hanging out, rocking the Air Jordan IIIs. “Anytime MJ did anything in that building, the old Chicago Stadium was just so loud and noisy,” Butler recalls. “And that night it was fans—it was not All-Star corporate suits and stuff. It was Chicago Bulls fans. Basketball fans.”

The atmosphere was set. Everyone was in position. And then the show began. Nique and MJ made quick work of the rest of the field to advance to the finals. Wilkins then promptly earned back-to-back perfect 50s for a tomahawk slam off the backboard and a ridiculous windmill from the baseline. It was like Nique really hated the rim and was giving that thing a beating with every monster slam. Mike’s first two dunks in the finals were equally jaw-dropping—a 50 for a double-pump between his legs from the left side, and a 47 for an air-walking jam from the right side that really made it look like he could fly.

“Had we not had the benefit of replay to watch it over, your eyes couldn’t catch in real time what they really had done in the air,” says Thomas, thinking back to the epic dunk display. “Your eye really couldn’t comprehend what had just happened.”

When Wilkins got a 45 for his third and final dunk, MJ suddenly had an opening to win it. But he’d need something special, something to cement his victory that night and his place in history as a two-time dunk champion, plus bragging rights over Nique. “I found the guy who started it all. Dr. J was sitting over there,” Jordan would say afterward. “He was looking at me and he pointed, like, Go back and do the free-throw line.”

Jordan actually missed his first attempt. But on the second try, he gave himself a running start the length of the entire 94 feet of the court, took off from the foul line, cocked the ball back midway through the air, and dunked it FTW. The Chicago crowd went apeshit.

“Michael was always very wise to the importance of certain moments,” as Butler puts it.

The enduring legacy of the greatest Slam Dunk Contest in history makes it easy to forget that another all-time NBA great delivered a signature ASW moment of his own on the same floor about an hour earlier. In fact, Butler remembers Larry Bird’s 3-Point Shootout performance as the more electric event that night.

“Obviously most people think of Jordan winning the Dunk Contest, and I’m a huge MJ guy, but for me, Bird winning the 3-Point Contest was crazy exciting,” he says. “Bird was talking shit like he always does beforehand, and the simple fact he never took off his warm-up jacket was so cool to me. And then walking off with the Joe Namath finger in the air, not saying a word, just the finger in the air. To me, that was such a Larry Bird moment.”

You see, Bird had won the 3-Point Contest—or the Long Distance Shootout, as it was still referred to in those days—in 1986 and 1987, the first two years the NBA ever held the competition. He owned this event. “Larry walks in and says, ‘I hope all you guys in here are thinking about second place, because I’m winning this,’” Lakers guard Michael Cooper famously told ESPN.

When All-Star arrived in Chicago, Bird defeated a field that included Danny Ainge, Dale Ellis, Craig Hodges, Mark Price, Detlef Schrempf and Byron Scott without even taking his warm-up off. No, really—dude did the whole contest with his shooting shirt on, like it was light work. (It was.)

He drained the last three shots from his last rack in the finals against Ellis, and on the last shot, he was already walking away holding one finger in the air, not even looking at the hoop anymore, when it splashed through the net. Cash.

“He didn’t take off his top yet. I’d hate to see when he takes off his top,” Jordan told the cameras watching backstage. With a third straight victory in dramatic fashion, it meant there was—at that time in history—still no one to ever win the 3-Point Contest whose name wasn’t Larry Bird.

“It’s a little bit harder than it looks,” Bird told the late Craig Sager on the TV broadcast afterward. No one believed him.

Sunday’s All-Star Game was icing on the cake. Jordan scored 40 points, including 16 in the final six minutes, to lead the East to a 138-133 victory. The West didn’t even get to within 8 until a couple cheap buckets in what was a meaningless final minute. But the way Jordan’s East teammate Doc Rivers remembers it, Mike was pissed it was even that close.

“The thing I remember the most about [Jordan] is the halftime speech at the All-Star Game,” Rivers, a Chicago native, told the Chicago Tribune in 2013. “Barkley was laughing; a couple of guys were joking around. He basically informed us that we were going to win the game. And whoever didn’t feel that way shouldn’t play in the second half.”

Thomas, always the competitor, finished with 15 assists—8 of them to Jordan. On the other side, Johnson had 19 dimes for the West squad. “Magic and I always took it upon ourselves to make sure that we had the hometown crowd involved,” says Thomas, who himself grew up on the West Side of Chicago before leading the Detroit Pistons to a pair of NBA titles. “If you look at any of the All-Star Games, we always tried to make sure the hometown person, whoever he was, we always tried to make sure that those players shined. It was very easy to play to Jordan, because he was the best player and he was the crowd favorite.”

Michael added 8 rebounds, 4 steals, 4 blocks and 3 assists in just under 30 minutes of court time, earning unanimous MVP honors in his home arena. “In a league of stars, in a game of stars, you were the star of stars,” the late David Stern told MJ during the post-game trophy presentation.

It capped off an All-Star Weekend consisting of the greatest Slam Dunk Contest ever, an iconic 3-Point Contest, and a Sunday game that featured the greatest to ever do it dropping 40 to win MVP.

Abe Schwadron is a social editor at FanDuel and former Senior Editor at SLAM.