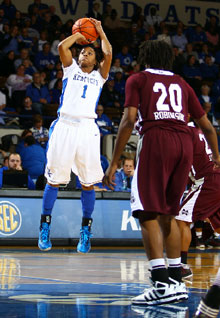 The SEC’s reigning Player of the Year, A’dia Mathies, will be linking back with SLAMonline throughout the season, as her fifth-ranked squad aims to reach the Final Four.—Ed.

Hello again, SLAM fam! Thanks for checking out my January diary update. I hope everyone had a pleasant and safe holiday and are starting the New Year off right.

It’s been a wild ride for UK women’s basketball this season. We are ranked No. 5 in the country, which is our highest ranking in the Associated

Press poll since 1983! I think it demonstrates all the hard work we put in and what we have become as a program over the years. Our accomplishments didn’t happen overnight and Coach Mitchell has kept us steady since I’ve been here and we have just been getting better and better. I’m glad we are considered an elite team and I give all the credit to my teammates and the hard work we put in.

We are still undefeated since the Baylor game and have won a school-record 15 straight games as well as broken another record with 31 consecutive home wins. The only other team in the country with a winning streak as long as ours right now is Duke, who is well-known as having a legit women’s hoops team as well.

As far as conference play goes, we have been playing some great basketball and have gotten off to a fast start with our record so far. We’ve managed to go 4-0 against great competition and we are just looking forward to each game and trying to get the next victory. In the first four games we have had the opportunity to play the newcomers to the league in Texas A&M and Missouri.

The 65-62 victory over A&M game was an unbelievable game. It was the first time we have played them in school history and to play against another top-25 team with a great program who won a National Championship a couple of years ago was awesome. I can’t forget to mention all the UK fans that support us. They helped us get a late victory and it was definitely earned in a 40-minute battle. It was truly special.

As we know from past years’ experience and our play early on this season, every game in the SEC is going to be a battle. Also with us being the defending SEC champs every team will be gunning for us. I think if we stay together, continue to play great defense, play aggressive and just keep doing the things we know we are capable of doing, then we should come out on top.

As always thanks for taking the time to read my blog. I’ll be stopping in next month to talk about wrapping up SEC play and looking forward to March Madness!